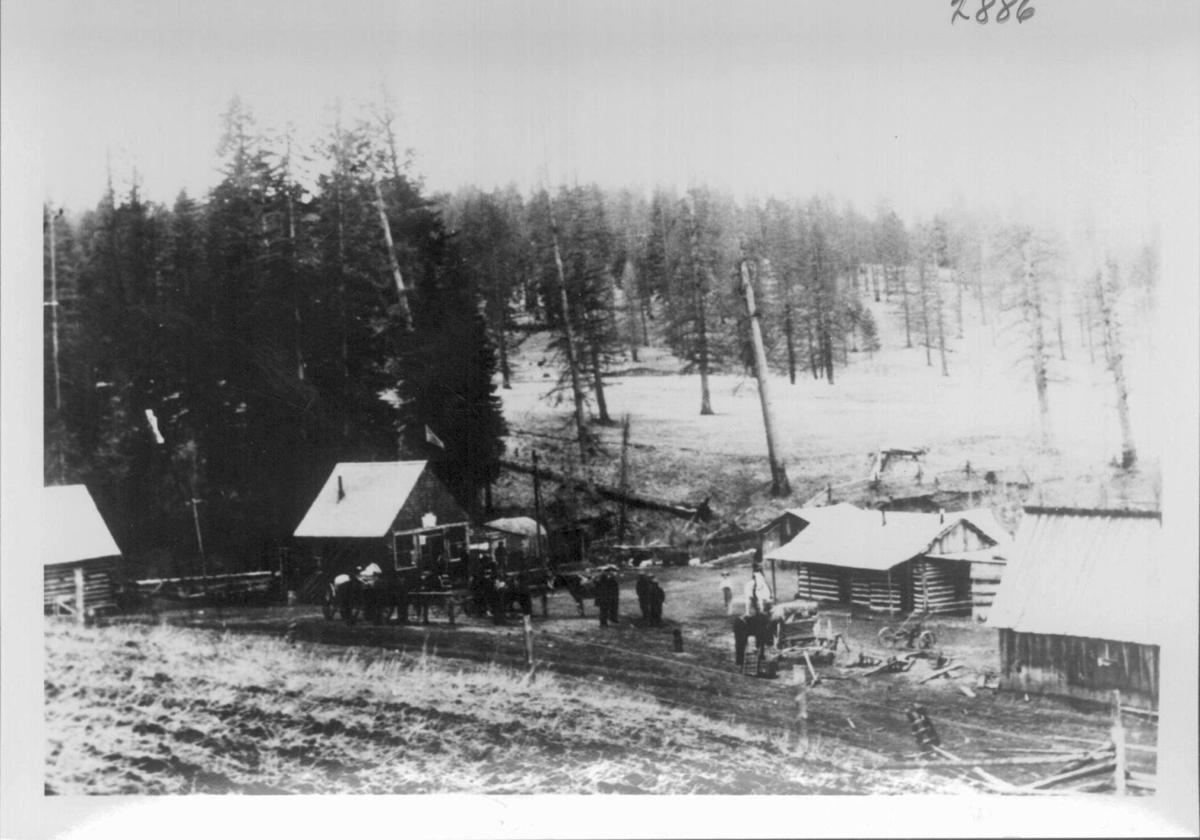 The town of Wauconda in 1905 or 1906. At left is a stage barn. The log cabin was the first store and post office. A blacksmith shop is at far right. 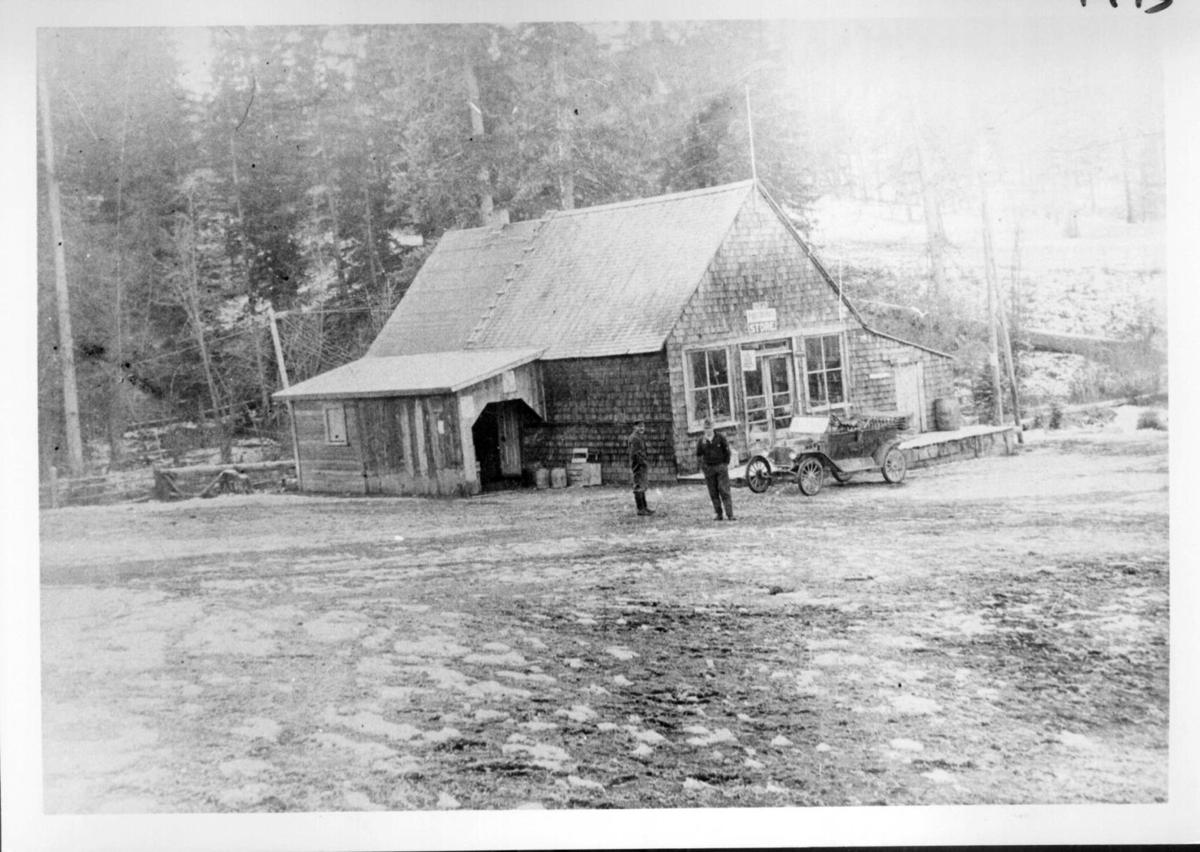 The Wauconda store in 1915-16. Facing the camera is Clarence Rowe. He and Charlie Merrill bought the store from J. R. Van Slyke. 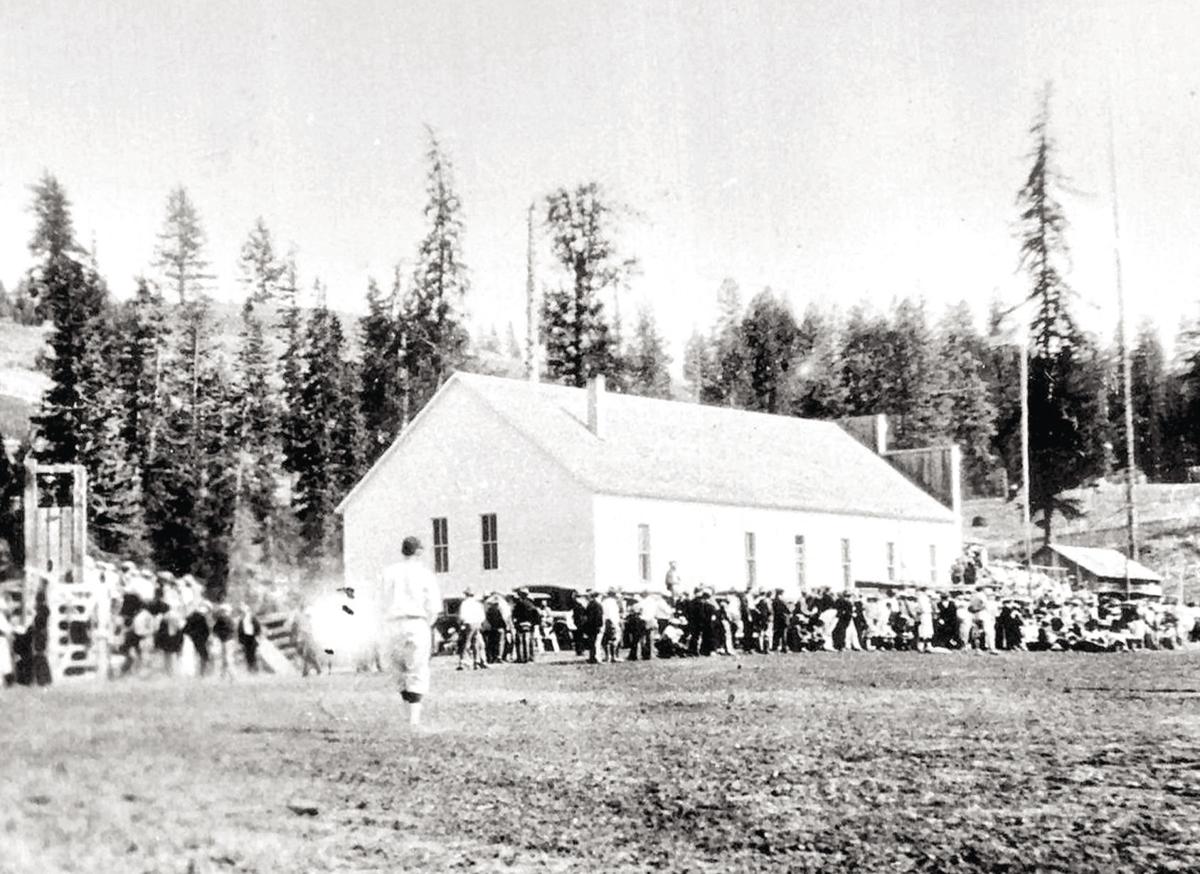 The Wauconda Flag Day celebration in 1929 draws a large crowd to the Wauconda Community Hall. 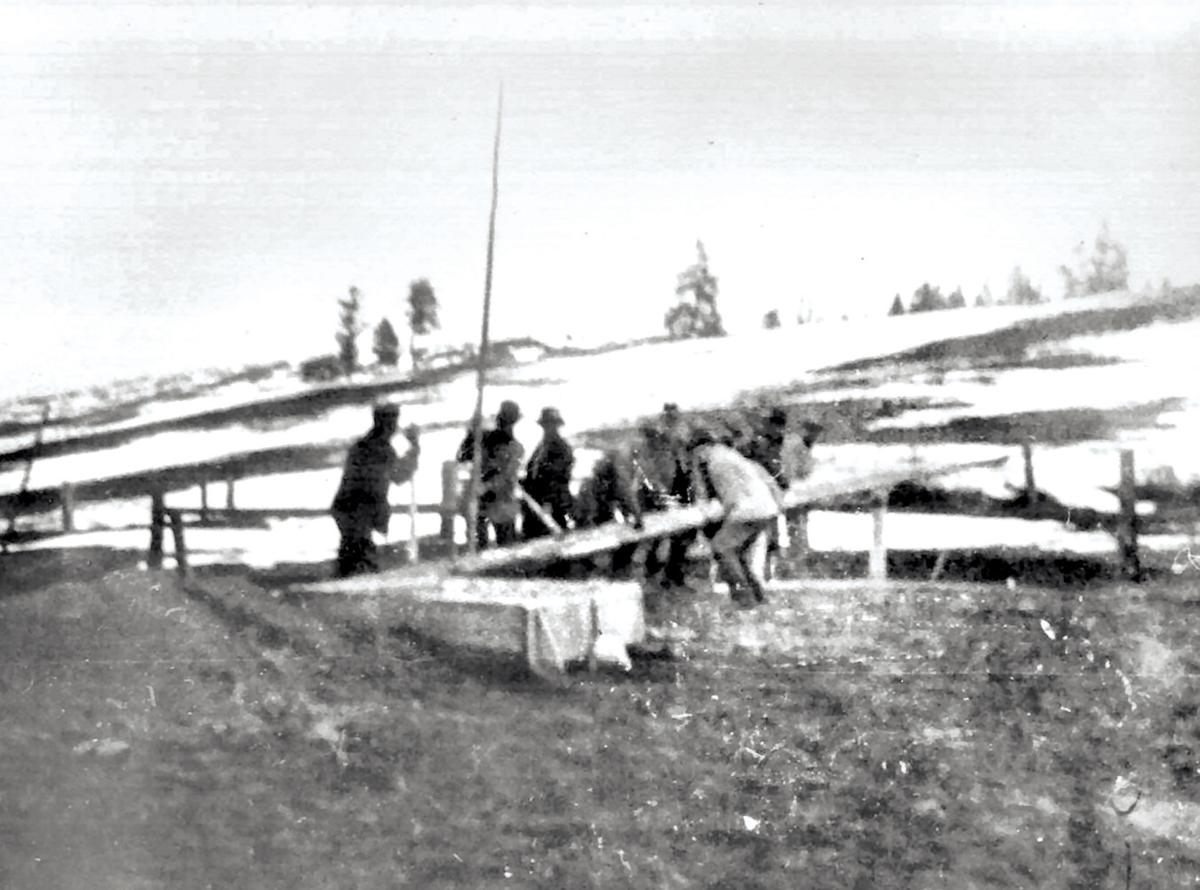 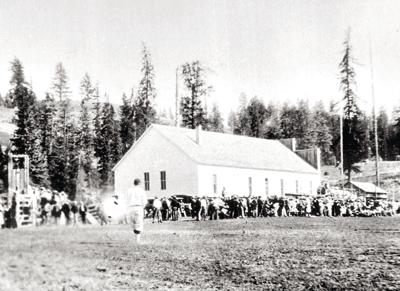 In 1896 three brothers from Illinois set out to seek their fortune in eastern Washington during the gold rush.

The siblings, referred to as “the Hedge brothers” in historical documents, landed east of Tonasket in what was to become Wauconda.

Their discovery of a wide ledge of quartz carrying free gold in the spring of 1896 touched off a headlong rush to the area as prospectors envisioned another Eureka Camp.

A town was started in 1898 and called Wauconda after the Hedges’ hometown in Illinois.

There were four patented mines: The Oregonian and Wauconda Nos. 1, 2 and 3; and an additional 18 unpatented mines in the area, according the Okanogan County Historical Society. The bulk of the mining was done by the Wauconda Gold Mining Co. from 1898 to 1904.

“Over 2,000 feet of crosscuts, adits and drifts were dug, plus a 60-ton stamp mill and a sampling mill were built at the main tunnel for the processing of ore,” historians said. “Numerous 50-pound samples gave values of $10-$18 per ton with a 95 percent gold recovery.”

By 1898, a road was built from Republic to Wauconda and on through the mountain by Cougar Creek to Old Toroda and Bodie, both of which were also mining towns.

In 1899 the road was completed to Chesaw by way of Pontiac Ridge.

The town of Wauconda eventually grew with the gold rush, reaching 335 people in 1900.

By 1902, the gold ore was found to be unprofitable and the mine closed. People started moving out.

Originally, there were three separate sites of the “town” of Wauconda — near Wauconda Pass, Toroda Creek and along Highway 20.

In 1929, the state built Highway 20 on a route that bypassed the town, so the town (originally located in the general vicinity of the Wauconda Community Hall) was moved over near Wauconda Pass, about two miles, to its present site.

The first mail to come to the Wauconda area was on horseback twice a week from Marcus to Old Toroda in 1898-1899. The carrier was Loie S. Kurtz.

According to pioneer accounts in the book “Trails & Tales,” the route crossed the Columbia River where it was very wide and shallow at Marcus (a small town in Stevens County), then across the Kettle River, up Deadman Creek (now referred to as Boulder Creek), over the Kettle River Mountain Range to Curlew, north along the Kettle River and up Toroda Creek.

A second mail route was added from Republic to Chesaw via Old Wauconda in 1900. At first, only mail was carried by horseback. Then they used horses and freight wagons and carried freight and passengers.

A U.S. Post Office was established in 1901 with Fred Gugat serving as postmaster. It had operated for a year previous on a trial basis with Morton Hill as postmaster.

By the late 1920s Jim Grigare started a stage line called The Tonasket, Republic, Wilbur Transportation Company. The line connected with the Washington Motor Coach at Wilbur and also Tonasket. It was advertised as the route of “Sixty Miles of Shade.” The line hauled passengers and freight until 1934.

Throughout the years post offices were located in Antwyne (Antoine), Anglin, Aeneas, Brokus, Leese and Wauconda.

In the early 1900s, when the north half of the Colville Indian Reservation opened for white settlers, John Laurie and several companions from Sutton, Neb., took up residence under the homestead Act.

In 1915 they decided to build a new home, replacing a smaller log cabin.

The house consisted of six bedrooms, a large living room, and large kitchen and dining room. The dimensions of the living room were 18 by 24 feet. The home, named “Bonnie Brae” (Scottish for “beautiful acres”), was used for dances and social functions prior to constriction of the Wauconda Community Hall in 1917.

Discussions to build the present-day Wauconda Community Hall began in 1915.

“The progressive people of the Wauconda district are planning the erection of a very pretentious hall for social purposes, and efforts are now underway to secure a suitable site,” a story published March 5, 1915, in the Tonasket Times newspaper said. “The building will be 40 x 80 feet, and 50,000 feet of logs have already been secured from various members of the community to be sawed into lumber for the structure. The hall will be held in the hands of a board of trustees who will be elected at some future date.”

Around 1,500 people attended the first celebration at the hall in 1917. Events for the day included a ballgame between Republic and Oroville, foot races, music and food.

The hall remains functional, and a group of volunteers — The Wauconda Community Hall Association — continues to host events including a sock hop, pie auction, chili feed and other social events annually.

The hall group is seeking funds to replace the building’s aging, original siding.

In 2008, store owner Daphne Fletcher placed the town’s commercial properties — along with a residence — for sale with an asking price of $1,125,000. In March 2010, she took to the Internet and listed the combined properties on eBay, marketing it as a “town for auction.”

A couple from Healesville, Victoria, Australia, won the auction with a purchase price of $370,601, but failed to complete the transaction. Two weeks later, a Bothell couple, Neal and Maddie Love, purchased the businesses for $360,000. However, when Neal Love found employment in North Dakota, the couple closed the store in June 2015.

Present-day Wauconda is much smaller.

The post office relocated to Toroda Creek a couple of years ago, and the gas station, general store and restaurant remain closed.

Today, Wauconda is a ranching community.

The Pflug Mansion, a popular roadside attraction, was built by John and Anna Pflug in 1908.

With limited funds, the couple — immigrants from Germany — started building their dream home entirely by themselves. Historic accounts say they hauled lumber by wagon from a mill that was 10 miles away. The home was never completed and was abandoned in 1921.