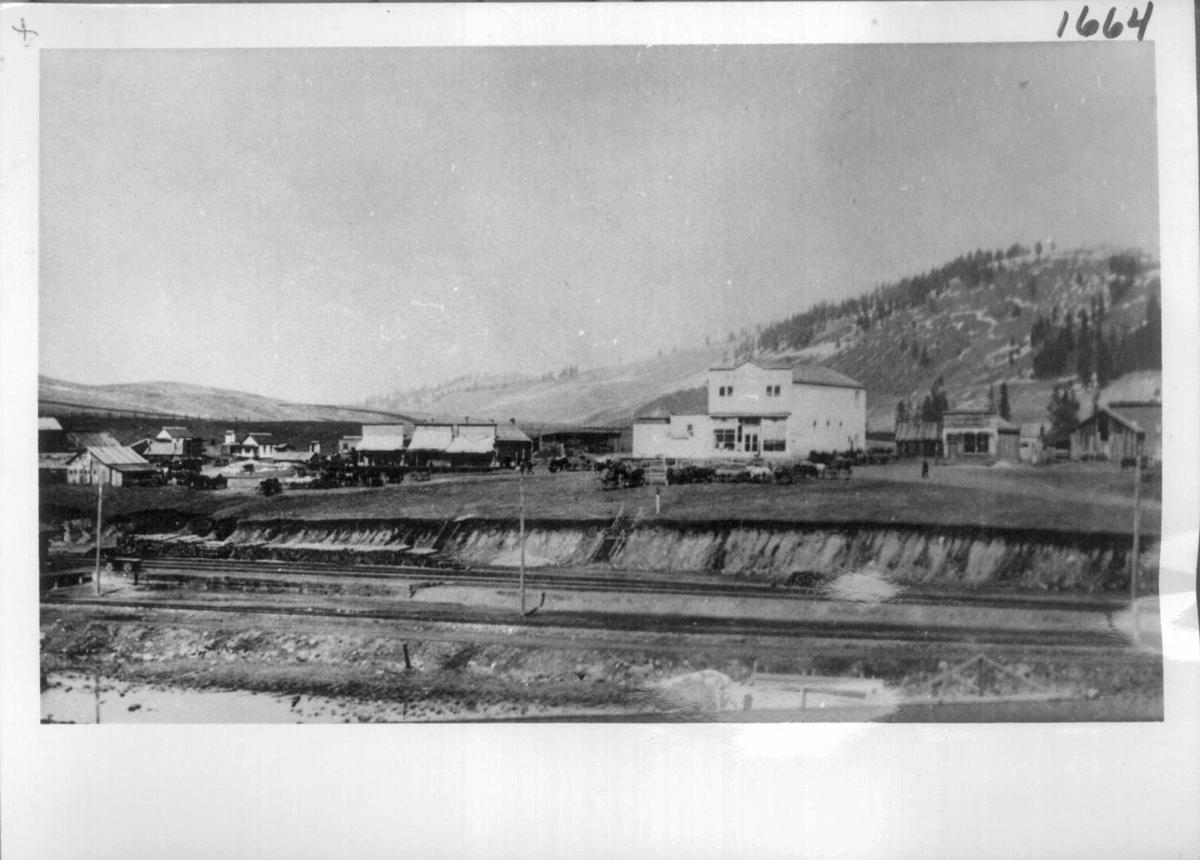 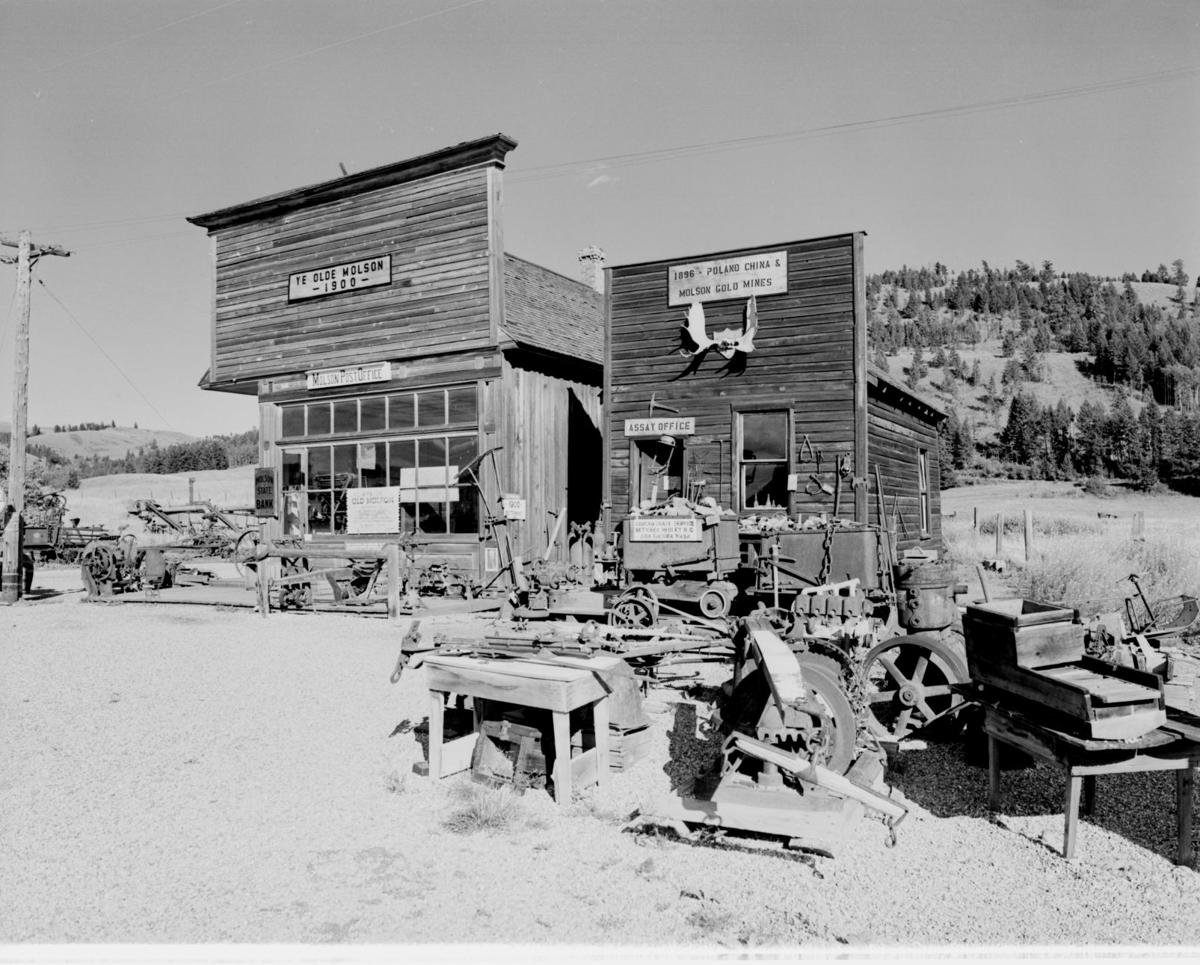 Old Molson ghost town in the spring of 1983. Old Molson can be viewed from April through November. 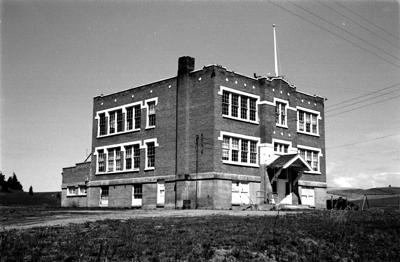 MOLSON - As one enters the present-day community of Molson, a small green sign reading “Population 35” greets tourists. But in the late 1800s, there were more than 300 people who called the community home.

In 1896, gold was discovered in the region, prompting prospectors to move to the booming town of Molson and swelling the population of about a dozen to close to 300.

In 1898, the town, a product of the government’s decision to open the Colville Indian Reservation’s old North Half to settlement, was financed initially by John W. Molson of the Canadian brewing family. Promoter George B. Meacham had an option on the nearby Poland China gold mine, and persuaded Molson to buy into a townsite.

The town grew, but by February 1901, Meacham had departed for the Texas oil fields.

Meacham apparently never registered title to the land on which he founded the town, so John H. McDonald, a local man, seized the opportunity and registered the townsite in his name instead.

Historical accounts claim he promptly informed the town businesses and residents that they were trespassing and ordered them to get out.

According to local historians, the Molson Post Office apparently was stolen when the postmaster went to lunch, and the bank was built on skids and moved from one lot to the other until it ended up in New Molson.

The town of New Molson then sprang up to the north. For two decades, the two rival towns existed side by side.

Folks continued to squabble and a third town, central Molson, was platted in 1916.

After a court battle, part of the original townsite was declared valid, but by then it was a ghost town. Central Molson and New Molson became the present community of Molson.

“In 1913-14 the town was the fastest growing in the county,” according to the book “Highland Railroad Echoes.”

“In 1914 alone, 118 lots were sold,” said the book, by the Floyd Rise and Elva Helm and published by the Molson Museum Association.

In December 1914, the Molson Leader newspaper reported that records showed “Molson shipped more grain, hay, livestock and cream than any other town on the entire railway even through Colville, Chewelah and other towns (that) were several times larger.”

In 1915 and 1916, high wartime wheat prices, rampant inflation and economic depression took their tolls on the community.

Between 1918 and 1928, a third of the land reverted to mortgage companies. The Molson State Bank went on to collapse in 1924.

In 1911 the New Imperial Hotel was built to replace the Molson Hotel, which was destroyed by fire 1910.

Separate fire consumed many of the local businesses, including the Dunn Theatre and Molson Theatre in the early 1920s.

The Molson Mercantile Dunlap Department Store closed in 1937 and the outlying school district began reorienting toward the valley floor, according to historians.

In 1914 Molson School, a three-story brick structure built between Old and New Molson, was opened.

The last class to graduate from Molson was in 1962. Following closure of the school in 1969, students were then bused to the Oroville School District.

The building was acquired by Oroville School District, but in 1970, residents purchased it and converted it into a museum which opened to the public in 1982.

There were two passenger trains and one freight train daily from Spokane to Molson during the peak years; at one time it was the largest shipping point in the state and had the highest railroad depot at 3,708 feet.

“(An) Agreement has been reached whereby the Canadian Pacific Railway will take over that portion of the Great Northern Railway between Grand Forks, B.C., and Princeton, B.C., about 125 miles,” said a story published May 7, 1925, in The Omak Chronicle. “Approximately 50 miles of this link is across the international line, connecting the points of Curlew, Republic, Molson and Oroville.”

This progress brought in railroad workers and more settlers, and the town grew and prospered. There was a hotel that was always full of railroad people and tradesmen, and a theater was built for entertainment.

In 1935, when the ore supply was finally exhausted, the railroad stopped its route to Molson. Once again, many residents left to work elsewhere.

Today, Old Molson is the site of a museum operated by volunteers of the Okanogan County Historical Society. Visitors can go inside a variety of buildings, including the original bank building, two homestead cabins, newspaper and assay offices, and view farm machinery outside.

Old Molson can be viewed from April through November; Molson School Museum is open from 10 a.m. to 5 p.m. from Memorial Day weekend through Labor Day. Both are maintained and operated by volunteers.

The Molson Grange, which stands directly across the street from the school, celebrated its 150th anniversary in 2015 and contlines to remain an active organization.

Although Grange membership has been on the decline in recent years, the group continues to be involved in community activities and fundraising efforts. Its rich heritage includes being a driving force in getting electricity out to rural communities and making yellow the standard color for school buses to enhance safety for children, several members said.

Despite its declining numbers, the Grange is still an active, non-partisan political organization.

The community celebrates Molson Midsummer Festival the third Saturday in June each year and will celebrate its 25th anniversary this year.

Molson is also home to the Northwest Ice Fishing Festival each January.