Starting at
$20.00 for 90 days
Get Started
View all rates
You have permission to edit this article.
Edit
Home
News
Sports
Announcements
Lifestyle
Obituaries
Events
Special Sections
Opinion
Multimedia
Classifieds
Contact Us
E-edition
1 of 7 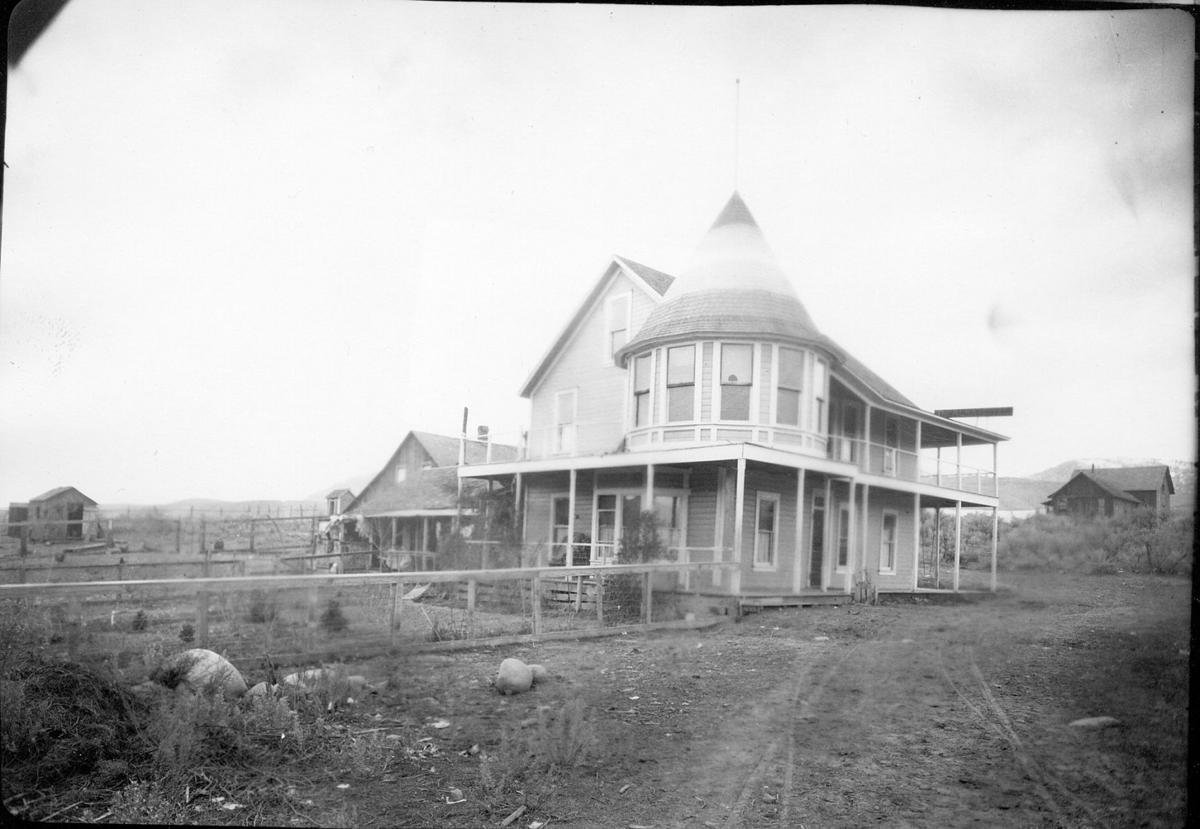 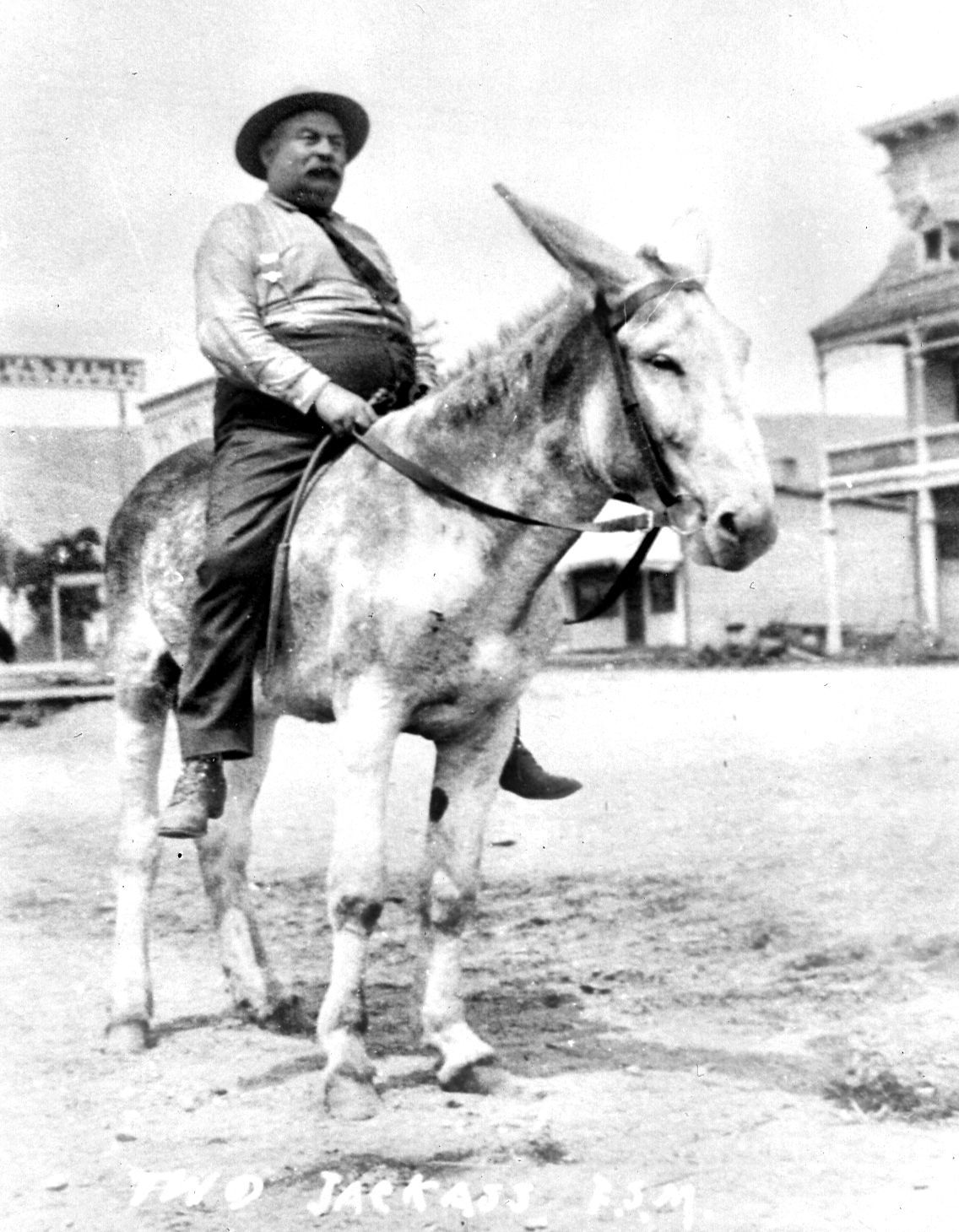 Big Dan McDonald rides through Okanogan on a jackass in 1910. He owned Big Dan’s Saloon and was on the first Okanogan City Council. 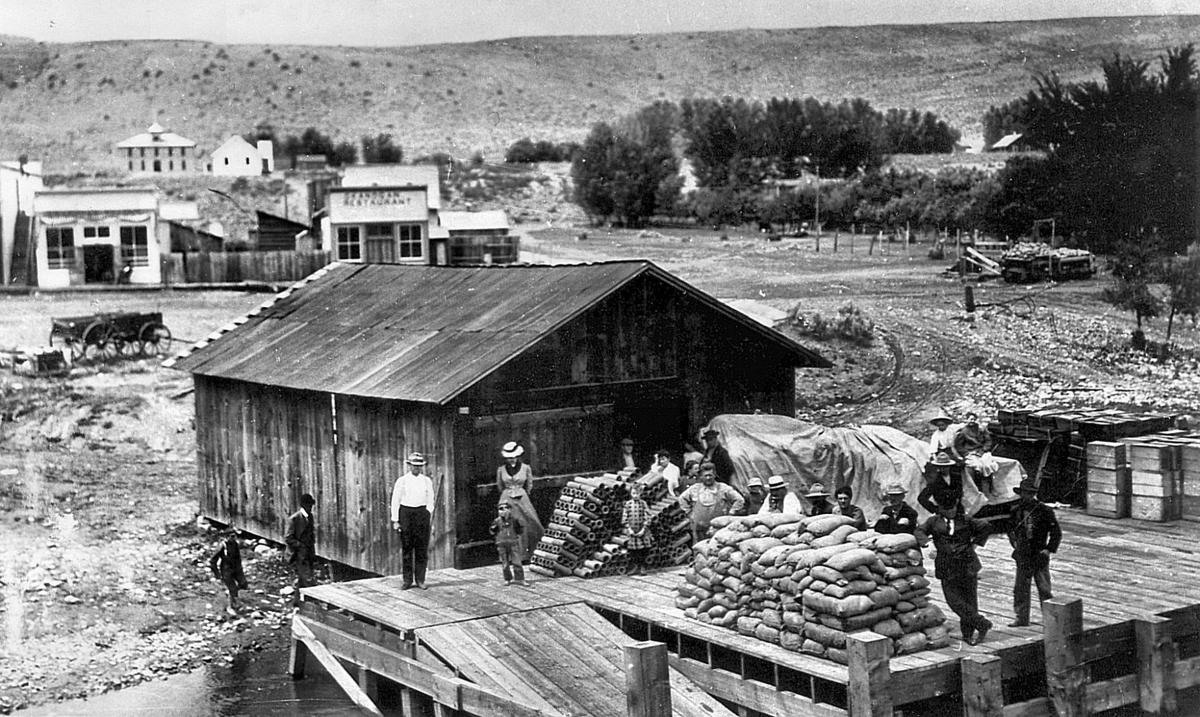 A riverboat docks at Okanogan, sometime before 1910. 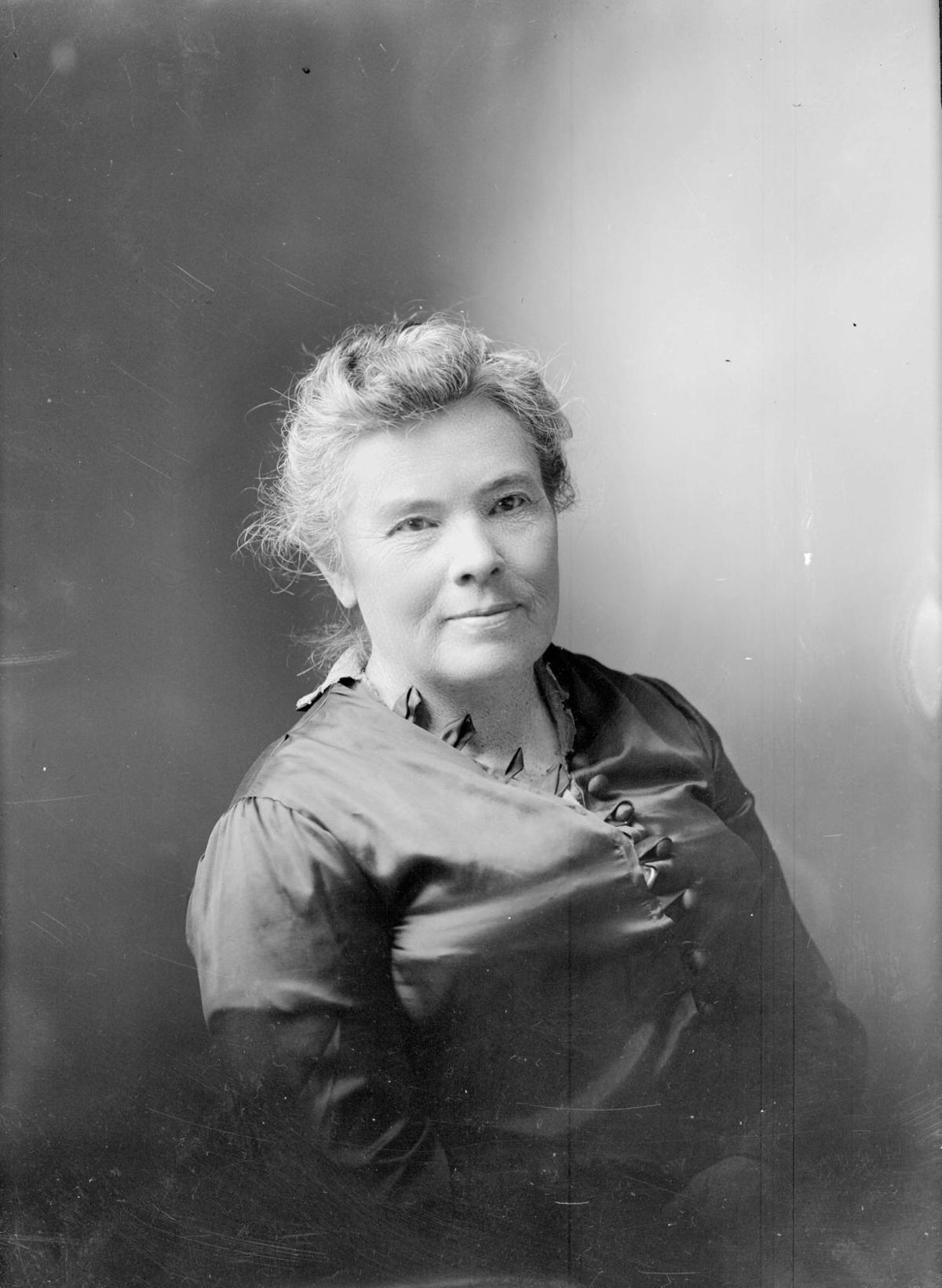 Virginia Grainger Hermann in 1916. She was Okanogan County superintendent of schools and Alma’s second postmaster. 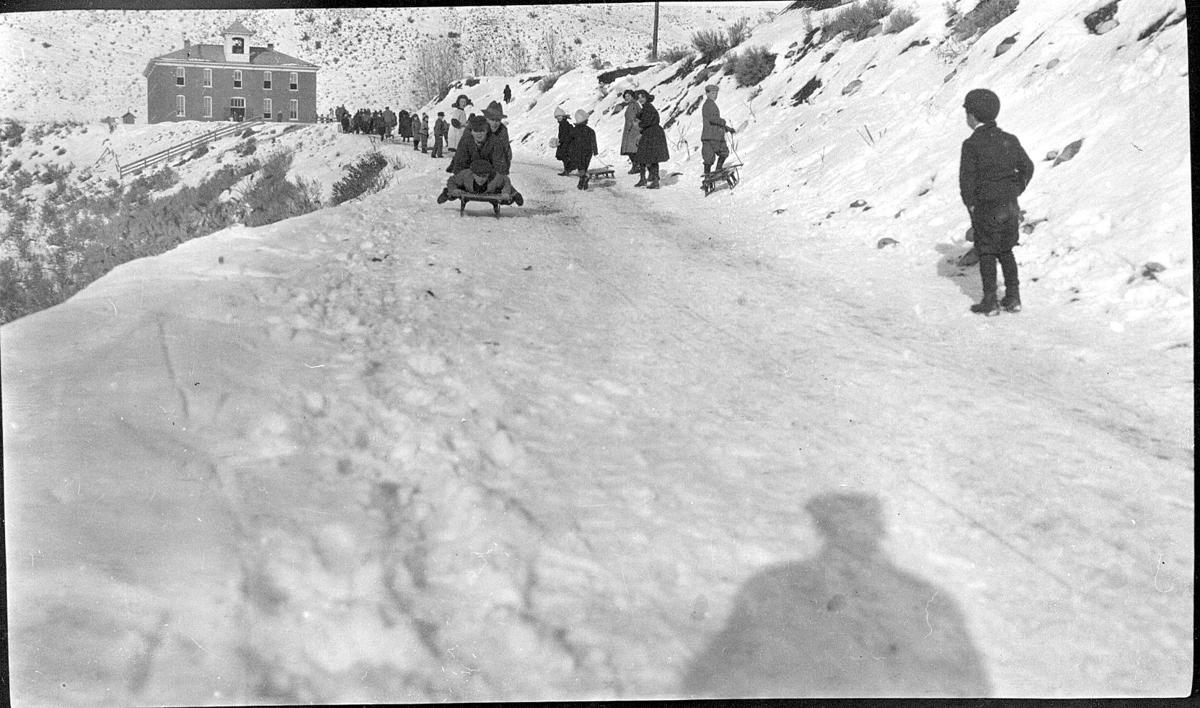 The Pine Street hill provides a smooth surface for sledding. Okanogan’s school, on the site of the Grainger Administration Building (a former school), is in the background. 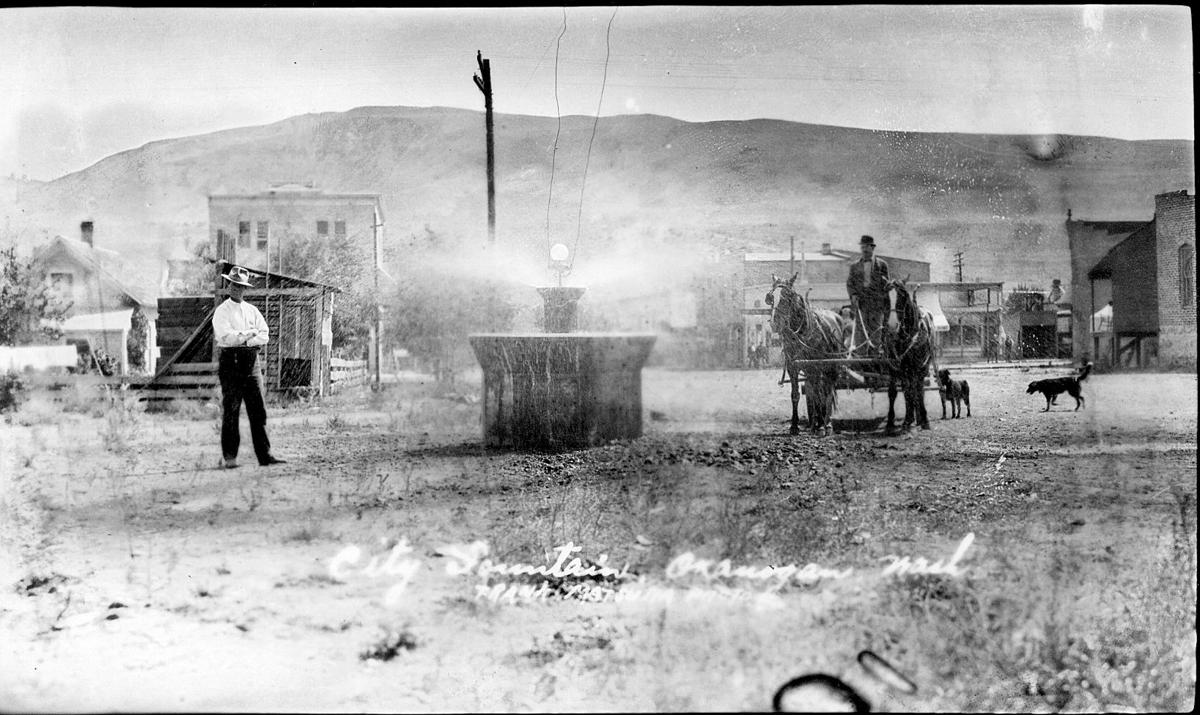 Okanogan’s town fountain/watering trough sprays water; the trough sat about where the Okanogan Public Library is now. The fountain now sits at the Okanogan County Historical Society Museum in Legion Park on Elmway. 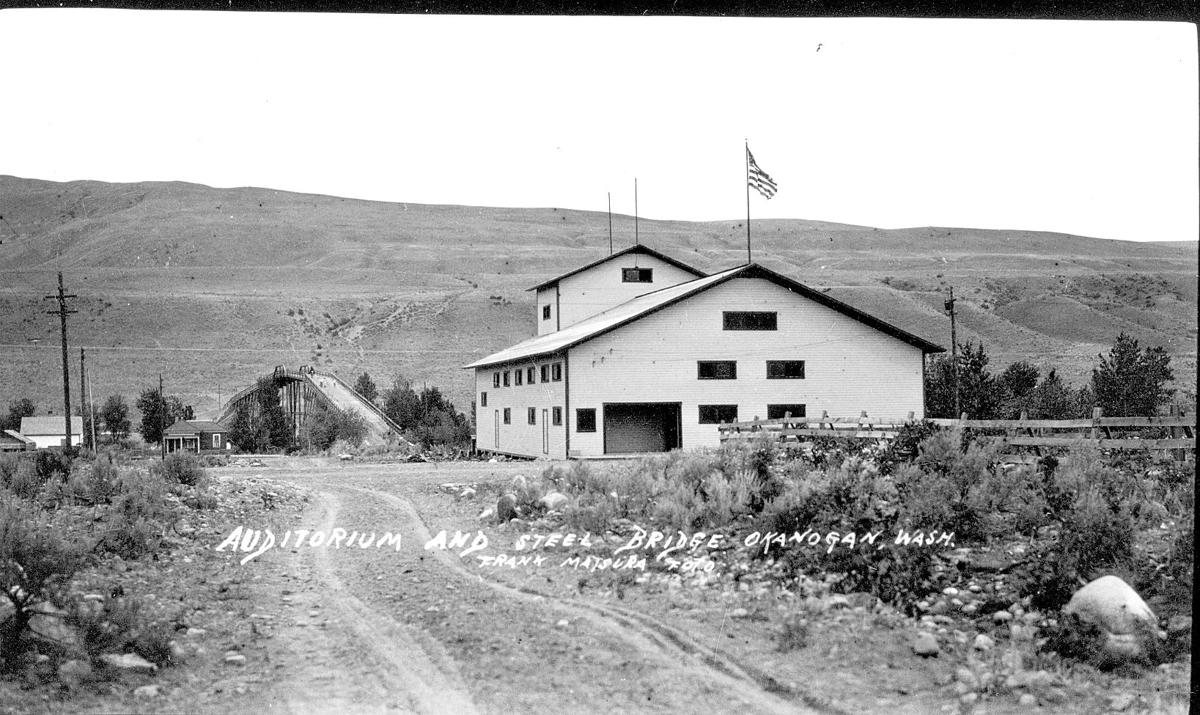 Okanogan's auditorium (foreground) and steel bridge, probably around 1910. Tyee Street now leads to a dead end with a river observation platform on the old bridge supports and boat launch on the Okanogan River just north of Salmon Creek.

Big Dan McDonald rides through Okanogan on a jackass in 1910. He owned Big Dan’s Saloon and was on the first Okanogan City Council.

A riverboat docks at Okanogan, sometime before 1910.

Virginia Grainger Hermann in 1916. She was Okanogan County superintendent of schools and Alma’s second postmaster.

The Pine Street hill provides a smooth surface for sledding. Okanogan’s school, on the site of the Grainger Administration Building (a former school), is in the background.

Okanogan’s town fountain/watering trough sprays water; the trough sat about where the Okanogan Public Library is now. The fountain now sits at the Okanogan County Historical Society Museum in Legion Park on Elmway.

Okanogan's auditorium (foreground) and steel bridge, probably around 1910. Tyee Street now leads to a dead end with a river observation platform on the old bridge supports and boat launch on the Okanogan River just north of Salmon Creek.

OKANOGAN - “It was a bright, sunny afternoon that day in May 1906 when I climbed out of the stage at Alma, after the tiresome ride over the rocky, dusty road from Brewster. The town had all the appearance of being a real frontier settlement. Most of the buildings were of the box type, built of rough lumber, with an entire absence of paint. There were no sidewalks - the streets were but trails through the sagebrush and rocks.”

Yates had been sent by the U.S. Reclamation Service to Okanogan to work on the irrigation project, which recently had been approved for construction.

His book, published in 1968, tells the irrigation district’s story but also gives insight into the lives and times of those who settled in the Okanogan and surrounding areas.

Alma began in 1886 as a trading post established near the mouth of Salmon Creek by Frank J. “Pard” Cummings, according to Bruce A. Wilson's “Late Frontier: A History of Okanogan County, Washington.” Cummings had located there when the Moses Indian Reservation was opened to settlement.

Cummings opened a trading depot, in which he did “a big business with the Indians,” according to O.H. Woody in “Glimpses of Pioneer Life.” The series of biographies, first printed in Woody’s Okanogan Independent, was published in 1924.

“It later grew into a large general store which became the headquarters for both Indians and white men and was the mecca for prospectors, cowboys and pioneers for hundreds of miles around,” Woody continued. “The mining boom was on in the Okanogan country at this time and many notable characters out of the west visited and outfitted at Pard’s place at Alma.”

Alma post office - the second in the county after Ruby, then the county seat - was established in 1888 south of Salmon Creek, according to Wilson.

“Postmarked Washington: Okanogan County,” by Guy Reed Ramsey, pegs Cummings as the first postmaster, followed by Virginia Grainger, a graduate of the University of Washington who came to Okanogan County when school records were destroyed by fire in the superintendent’s home. She became postmaster in 1898 and, later, married Charles Hermann, postmaster of Conconully.

The Alma town site, Yates wrote, was platted in July 1904 by J.W. O’Keefe and named for W.R. Kahlow’s daughter, Alma. She was the wife of a river boat captain, C.E. Hansen.

The town included the Alma Hotel, operated by Mrs. Kahlow; a general store, operated by W.S. Shumway, and Kahlow’s Livery Barn. Shumway later moved north to the newly founded town of Omak in 1907.

“Here I was - far removed from the city comforts I had grown accustomed to - a hundred miles from the nearest railroad and civilization - no telephone, no electric lights, and no way to get anywhere except by team, horseback, or walk,” wrote irrigation project clerk Yates on his arrival in Alma.

He’d come from Wenatchee via steamboat to Brewster and horse-draw stage from Brewster to Alma.

“That hundred-mile trip, which can now be driven easily in less than two hours, had consumed the better part of two days,” he noted.

A new town, North Alma, was platted north of Salmon Creek in October 1904 by Charles Ostenberg and V.M. Grainger. It housed the Pogue post office and the Davidson and Richards general store.

The town, population about 200, served as a trading center for the mid-valley area. Kahlow ran a ferry on the Okanogan River, about where the Oak Street bridge is now, to provide access to the Colville Indian Reservation.

“Illustrated History of Stevens, Ferry, Okanogan and Chelan Counties,” published in 1904 by Western Historical Publishing Co., describes Alma as being “in the midst of a 50,000-acre tract of magnificent horticultural and agricultural land, the largest area of this description in the county.”

Various ores had been uncovered nearby, and the town was surrounded by a large area of pine timber.

“The topography of the country is such that a distance of a mile only may make a difference of several degrees in the temperature,” the illustrated history continued.

Dr. J.I. Pogue, who had established an orchard on the flat that now bears his name, was active in promoting Alma as a “project town” for the new irrigation district.

Since Pogue, a one-time state senator, had been so active in getting the project approved and in promoting the town, the citizens of Alma - by then joined with North Alma - started a movement to change the town’s name to Pogue, and quietly did so in 1905.

The post office name was changed but later, in 1907, the town name was changed to Okanogan. Yates indicated the change came in order to mesh with the irrigation project’s name; Wilson cites some people’s beliefs that outsiders would not know how to pronounce Pogue.

In 1907 city residents voted to adopt the new name; the post office name was changed to Okanogan on July 1, 1907.

Mail first came to Okanogan from Brewster. At Malott, mail from Conconully was added, and the stage and one from Riverside met in Okanogan at noon each day, according to Ramsey.

Pogue had been flattered by the town’s name change to Pogue, but was deeply hurt when he learned it would be changed to Okanogan.

“He withdrew his patronage and support from the town, and went to his old friend, Ben Ross, and urged him to go ahead with his plan for platting part of his ranch into a new town,” Yates continued. That town became Omak.

Okanogan voters decided Sept. 30, 1907, in a vote of 77-1, and one thrown out, to incorporate the city. That one ballot was thrown out because the voter marked it both for and against incorporation, the Okanogan Independent reported Oct. 4, 1907.

At the first council meeting, Nov. 1, 1907, the council employed Judge William Compton Brown as clerk and legal adviser. City officials then set about purchasing record books, office supplies and so on.

Brown was instructed to prepare ordinances fixing the time and place of council meetings, providing for municipal elections, and regulating saloons, sanitation, sidewalks, breaches of the peace, dogs and so on.

Dempsey and McDonald (of Big Dan's Saloon) received a license to sell intoxicating liquors for one year, George B. Pratt was appointed police judge, the council set up a fire committee and Brown was instructed to seek unexpired liquor licenses from the county.

Woody’s Okanogan Independent was established in 1907. Mining, stock raising and orcharding were already established industries at the time Okanogan incorporated.

In 1913, the Great Northern Railroad’s branch from Wenatchee to Oroville was completed and took over the mail contract from the stages, wrote Ramsey.