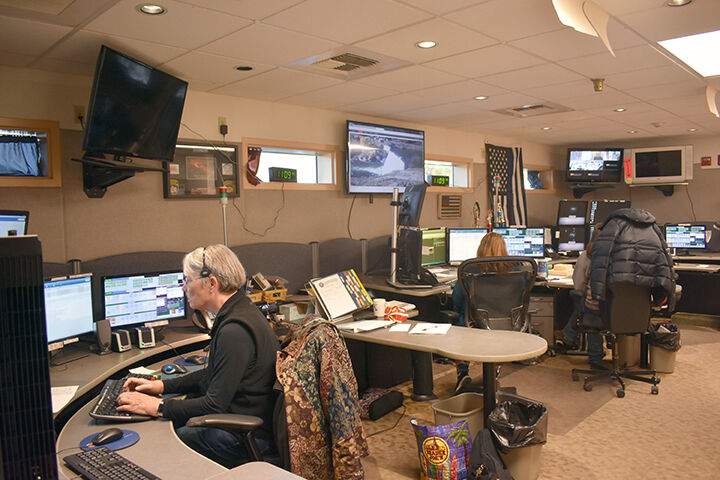 OKANOGAN – The folks in Okanogan County’s dispatch center were super-busy during the initial days of the Cold Springs Fire and also hampered as the fire knocked out communications equipment, land line and wireless telephones, and Internet.

“During the onset of the Cold Springs Fire the field operations became very active, obviously,” said Mike Worden, chief deputy of special operations and communications. “Dispatch staff took it upon themselves call for help from off-duty dispatchers to come in and keep up with the elevated workload.

“I am very proud of our dispatch staff for asking for help and answering the call for help to meet the needs of the public and agencies.”

The fire cause “a great deal” of damage to power and telecommunications infrastructure, he said.

Phones went down, but 911 volume ballooned.

Those numbers were up from 63 and 168, respectively, on the previous Sunday, Aug. 30, and accounted for a 67 percent increase.

By comparison, on July 14, 2014, the day the four Carlton Complex fires began, the number of calls to dispatch jumped to 446 from the previous day’s 304, according to dispatch statistics. July 15 and 16 each had more than 400 emergency calls.

Last week, by mid-day Monday, Sept. 7, with power, phones and Internet going down, the dispatch center was working with the state 911 office and RiverCom Dispatch in Wenatchee make sure people calling 911 got an answer, Worden said.

Worden said Okanogan County dispatchers also used personal and department cellphones – whichever worked at the moment – to communicate with other dispatch centers and the public to deliver emergency services.

“Effort and problem solving gets it done,” he said.

Just east of Okanogan, the county’s Jackass Butte site serving police, fire and emergency medical service agencies was not damaged, but equipment used by other agencies was.

A similar situation emerged at Pitcher Mountain. While the county’s building and tower were untouched, the adjacent facility housing equipment for a cellular provider and an Internet provider were destroyed, as was a building housing the Fire District No. 3 repeater, ambulance-to-hospital radio and Okanogan County Department of Public Works’ radio system.

Okanogan County Sheriff Tony Hawley said a portable repeater, normally used for event such as the Omak Stampede, was set up to restore radio service to Mid-Valley Hospital, Omak.

Electrical service also was damaged. Worden said a generator at Pitcher Mountain was fired up, so the county’s equipment was able to operate.

“This building was constructed fall 2017 with the state funds allocated after the 2014 fire, so the county has made progress, with much more improvements needed,” he said.

An initial estimate for replacing the fire, hospital and public works radio systems is at least $70,000. That doesn’t include the building, he said.

“We will be running it underground, and splicing fiber throughout the weekend,” she said Friday.

Worden said fiber optic cables in Cusick and Douglas County were damaged Sept. 7-8, reducing the number telephone calls people were able to make and that dispatch could receive “so the number of calls logged would have been far higher” otherwise.

“The story begins early Monday morning (Sept. 7), when the windstorm knocked trees into the northern end of the fiber loop outside Cusick,” said Corson. “That would have been our redundancy for what was to come, but we weren’t so lucky.” (See related story on PUD service interruptions.)

The fiber optic failures also severely slowed or stopped Internet and telephone service in many areas of the county, Worden said.

“Much of Monday afternoon, night and Tuesday morning was spent understanding the damage suffered, how to adjust and overcome the losses, and how to restore services where possible,” he said.

“Due to the extreme winds and fires in the region, our facilities that provide services to the Okanogan Valley were severely damaged near Bridgeport,” said Kerry Zimmer of CenturyLink, the main land line provider to the mid- and southern Okanogan Valley.

“Approximately 2,000 voice and 2,000 Internet customers in the Okanogan Valley were affected,” Zimmer said. “Connectivity to cell towers was also damaged.”

As of about 2 p.m. Tuesday, Sept. 8, 911 calls were again routed directly to Okanogan County dispatch.

On Tuesday afternoon, county dispatch officials coordinated with the PUD and state 911 office “to identify possible solutions to telephone carrier outages that may contribute to network reconfiguration to restore more telephone and Internet services,” Worden said. “Efforts to press telephone providers to restore services as quickly as possible are ongoing.”

By Friday, many land line services had been restored, as had cell service though signals were weak for the latter.

As of Friday morning, “our technicians have been able to restore almost all services throughout the state, with the exception of a few hot spots and the voice and Internet services in the Crystal Mountain area (of western Washington) due to road closures ” said Zimmer, alluding to a rash of fires statewide.

The company will continue to monitor the fires and work with local authorities until all services are restored.

“Due to our limited ability to access some locations, our response time may be delayed,” Zimmer said. “We appreciate the patience of our customers while we work diligently to restore all services.”