Starting at
$20.00 for 90 days
Get Started
View all rates
You have permission to edit this article.
Edit
Home
News
Sports
Announcements
Lifestyle
Obituaries
Events
Special Sections
Opinion
Multimedia
Classifieds
Contact Us
E-edition
1 of 6 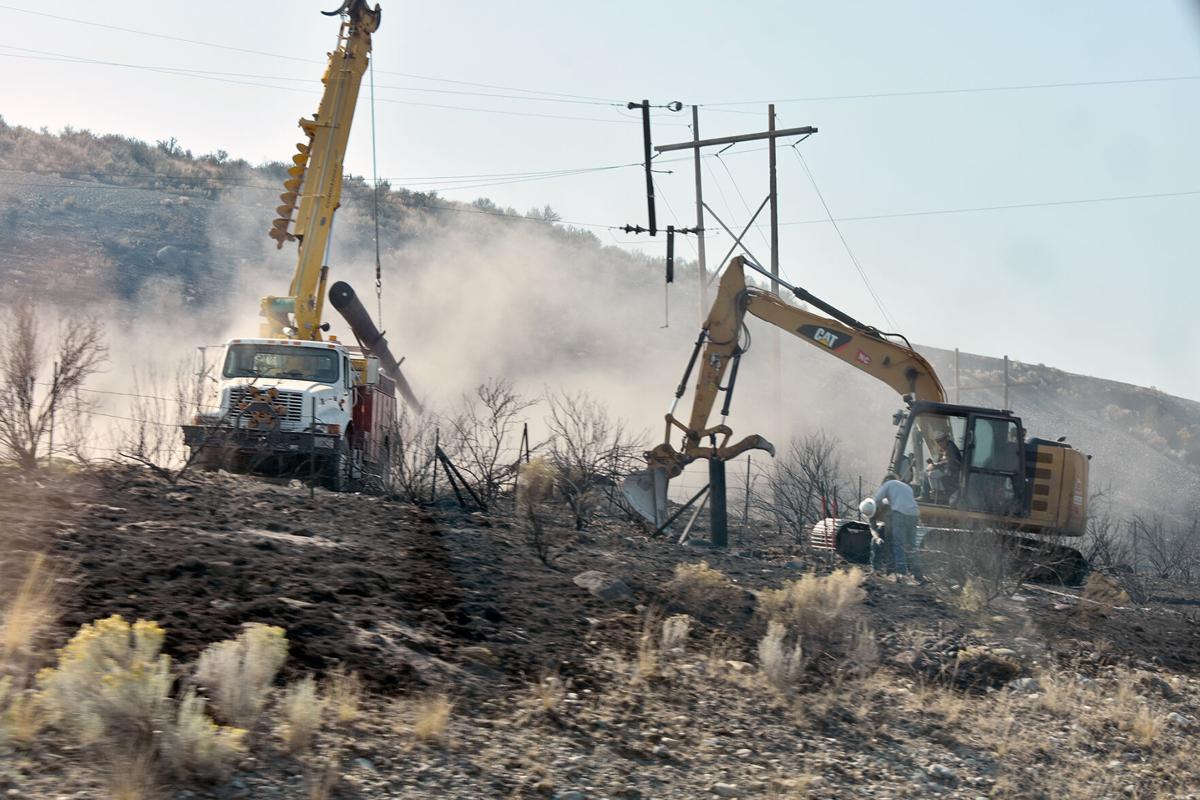 Crews from the Okanogan County Public Utility District work to replace a power pole south of Omak along Highway 97 on Sept. 8 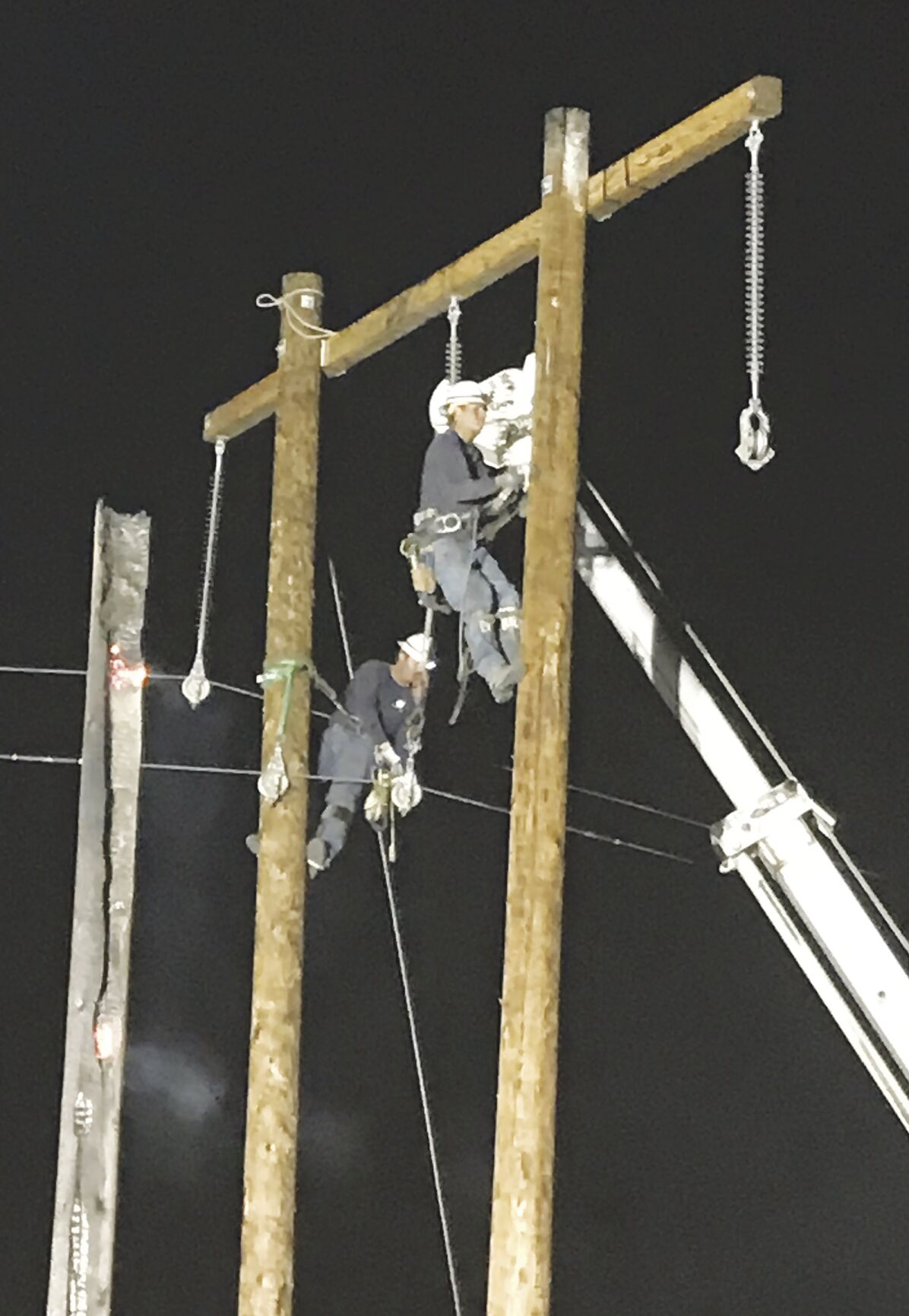 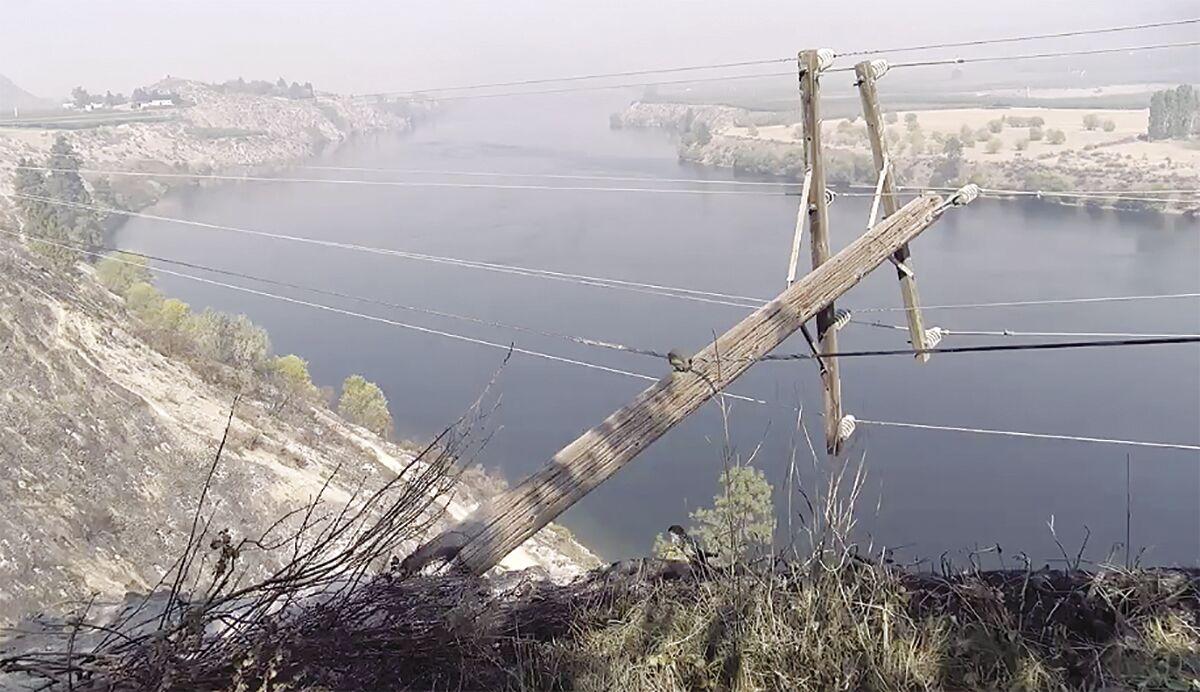 A damaged pole hangs on by wires along the Columbia. 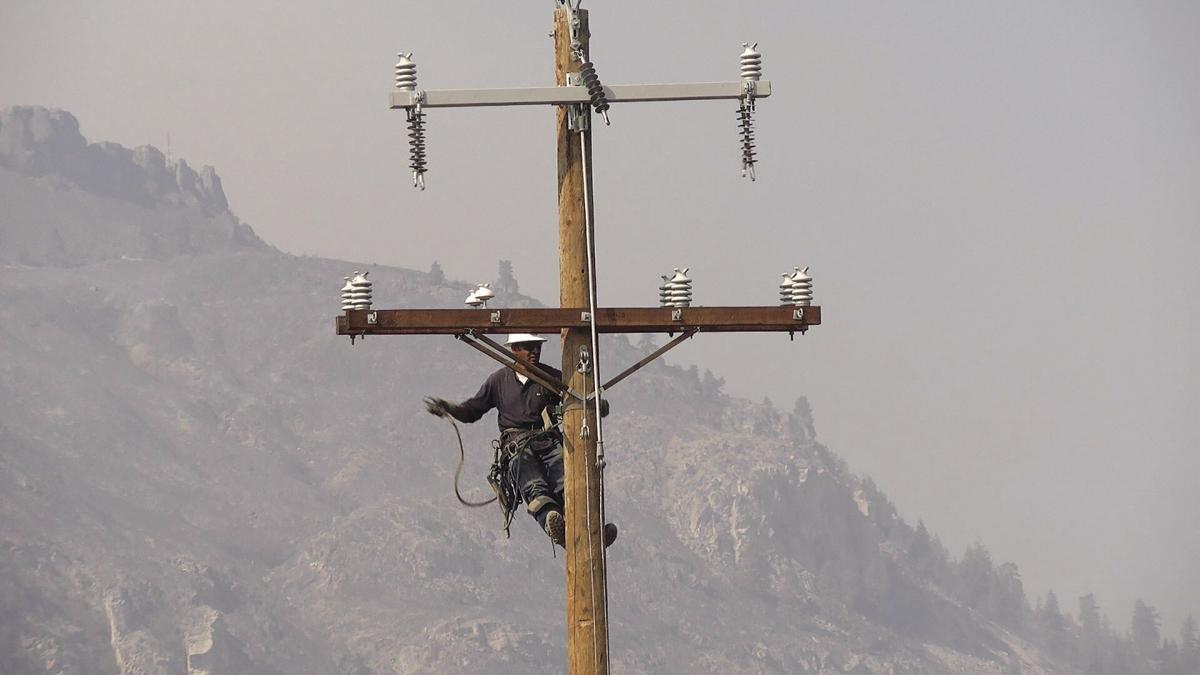 A Douglas County PUD worker climbs a pole to restring line after the Pearl Hill Fire swept through. 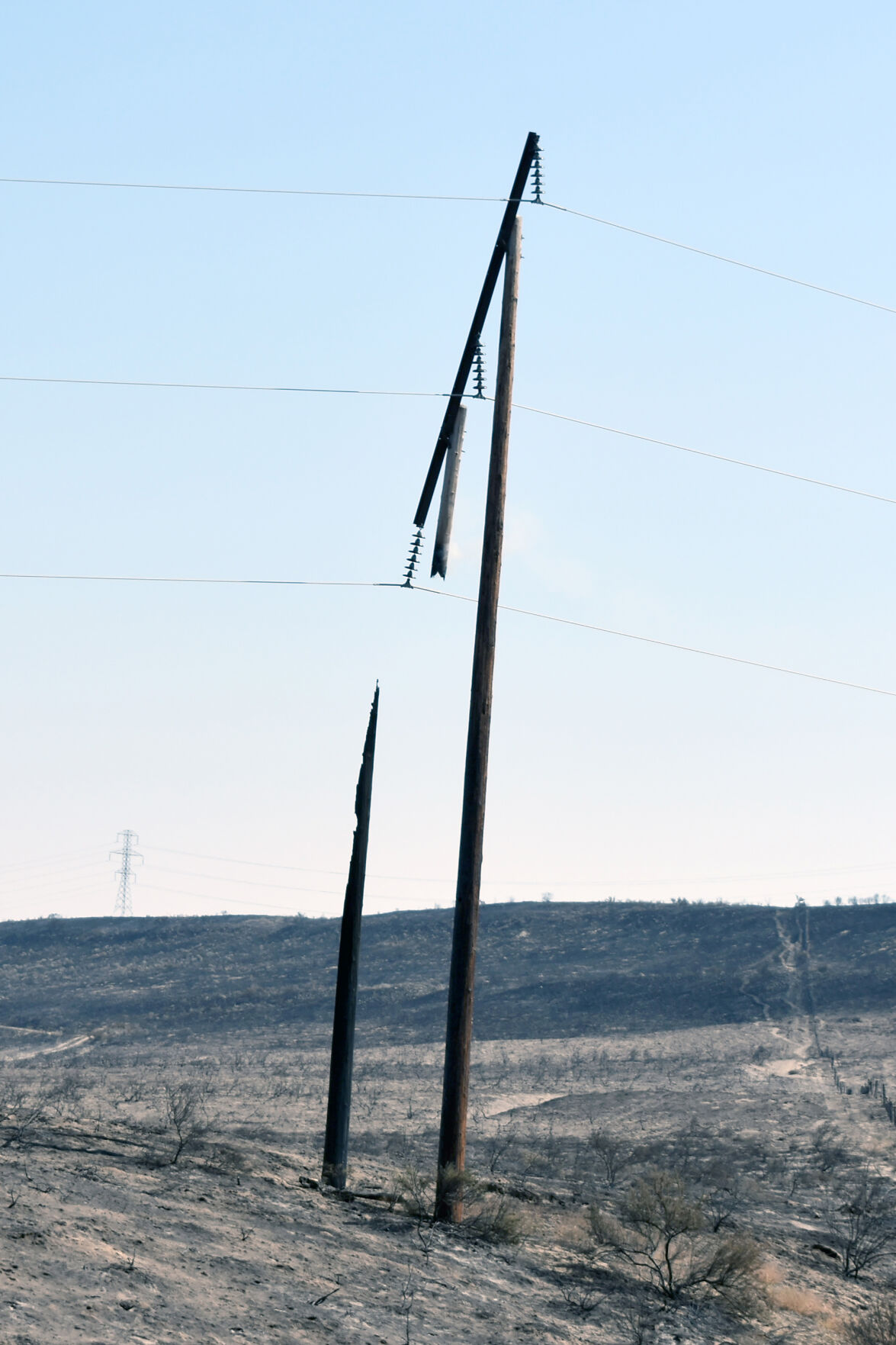 An electric structure is burnt through on Cameron Lake Road. 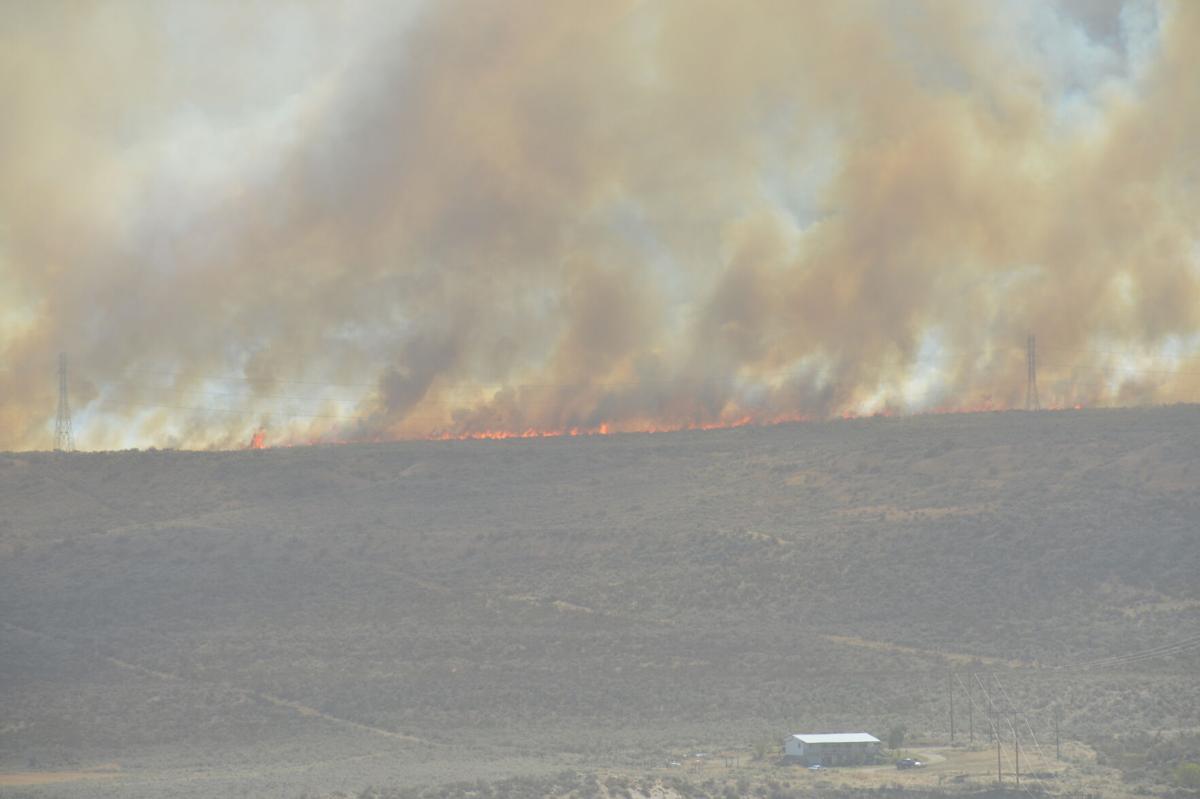 Crews from the Okanogan County Public Utility District work to replace a power pole south of Omak along Highway 97 on Sept. 8

A damaged pole hangs on by wires along the Columbia.

A Douglas County PUD worker climbs a pole to restring line after the Pearl Hill Fire swept through.

An electric structure is burnt through on Cameron Lake Road.

Repairs are still being made.

Crews began working to restore power and Internet service as soon as they could safely get into burned-over areas, said officials for Okanogan and Douglas counties’ public utility districts and Nespelem Valley Electric Cooperative.

In Okanogan County, electricity started going down at mid-morning Monday, Sept. 7, and by late afternoon most customers in the county were without power. Internet service soon followed, as did cellphone and land lines.

“We have four main transmission lines that feed into our county to provide power to all residents,” said Sheila Corson, spokeswoman for the Okanogan County PUD. “Three are (Bonneville Power Administration), one comes from Wells (Dam). At one point, all three BPA transmission lines were de-energized, whether from damage or from shut-offs due to the firefighting activity.”

“We were relying on Wells only at that point, which is what kept Pateros and Brewster and part of the Methow in power,” she said. “While we were working on switching other areas back on through the Wells line, one of the BPA lines came back up (around 8 p.m.), switching on most of the north part of the county.”

PUD crews kept working to restore power to the rest of Omak, Okanogan and Malott. Around 10:30 p.m., almost everyone had power.

“Later that night/early morning, we lost the Wells line for a while, dropping part of the south county again until later Tuesday,” Corson said. “Most people were out of power for several hours at a time. Basically, at some point on Monday – although not all at the same time – just about every customer on our system was without power.”

The PUD has more than 21,000 meters; some customers have more than one meter.

Crews have been heavily focused on Jackass Butte to restore the electric and fiber service.

“We will be running it underground, and splicing fiber through the weekend,” Corson said Friday. “Another main focus is Malott HUD, where we have about 40 customers out.”

As of Friday, the PUD had 100 or fewer meters without power, including the Malott HUD area. They were a combination of irrigation pumps and homes, Corson said.

A contract crew from Michels had worked a job in Aeneas Valley and helped the PUD with service restoration. The PUD also is working with its Douglas County counterpart.

Nespelem Valley Electric Cooperative, which serves some of the Colville Indian Reservation’s southwest area, also had power go down to several areas.

“We have multiple neighboring utilities helping to repair our lines and restore power to our members as soon as possible,” said a statement from the utility. “However, until our lines can be rebuilt and the burnt poles replaced, we have no estimated time frame as to when this will happen.

“Realistically, it could be many weeks. We realize this is stressful and a big inconvenience, but please be patient.”

The Chronicle was unable to reach the utility directly for an update.

As of early Sept. 8, about 2,300 customers were without power as the fire continued its march southward and to the west.

Crews rerouted power to Mansfield that morning, but more work was needed on a transmission line to get power back to Bridgeport, the utility said. Both cities had been under Level 3 (get out now) evacuation notices.

But by that evening, fire damaged the transmission line again and Bridgeport lost power once more. Work was underway to restore power to Bridgeport Bar, which also had been under a Level 3 evacuation notice.

“Good news Thursday,” the district said Sept. 10. “Crews got the transmission line fixed last night and Bridgeport is back in service.”

A big stretch of Highway 17 had power restored early Thursday and by late afternoon, Bridgeport Bar also had electricity as did customers on highways 2 and 17.

By Friday, crews were working on Pearl Hill and the area east of Mansfield. Dezellem Hill, which suffered extensive damage, Highland School, Jameson Lake and McNeil Canyon were still on the to-do list, said utility officials.

On Saturday about 250 customers were still without electricity, but mutual aid crews were helping, the utility said. On Sunday, Sept. 13, Dyer and Bridgeport hills remained without service.

“McNeil Canyon (is) extensively damaged and will take some time to repair,” the utility said.

As for fiber, the Okanogan County PUD story began early Monday morning, when the windstorm knocked trees into the northern end of the fiber loop outside Cusick, Corson said.

“That would have been our redundancy for what was to come, but we weren’t so lucky,” she said. “Later on Monday (mid-afternoon), Jackass Butte was burned over, taking out some critical communications infrastructure. Then later in the evening, the south end of our fiber loop was burned over near Chief Joseph (Dam), and we hit that Internet/cell/just about everything silence.”

In the wee hours of the morning, Pend Oreille-based crews fixed the northern end of the loop “and we got some connectivity back,” Corson said. “Since then, it’s been a long process of rerouting traffic and working with service providers to get customers back online and in service.”

“A main connection was made last night and they hope to get the fibers spliced to connect Bridgeport by this evening,” the utility said Thursday, Sept. 10.

On Sunday, the utility said crews were rebuilding lines and rerouting fiber circuits.

“The circuits would have been patched through to Okanogan PUD by now, but it appears the fire has struck again,” said the utility. “The fiber cable appears to be partially burnt one mile west of Brewster bridge. The PUD is looking into the severity of the damage now, but at this time it appears the cable will need to be replaced.”

“What’s left of it is mostly visible from Highway 97,” she said. “We also lost structures in the Foster Creek transmission line, which is a more critical need at this point.”

This isn’t the first time the utilities have faced widespread outages and damage to infrastructure. Okanogan County PUD lost lines and support structures in 2014 and 2015 to fires. The co-op had losses in 2015 and earlier this year.

“Both fortunately and unfortunately, our crews have experienced massive wildfires before, and they are experts at getting new structures in the ground and power back on quickly,” said Corson. “The ground might still be smoking, and the poles still burning, but they get right in there as soon as it is safe to do so and they get to work, literally day or night.”

She said other staff members have put in extra-long shifts and taken up extra duties.

Corson said people who suffered losses to their home electrical systems – wiring, meter boxes and so on – need to contact an electrician to fix the damage before the PUD can restore power.

The utility also issued a caution about use of generators.

“If it isn’t used correctly, it could back feed, energizing dead lines and may cause serious, life-threatening injuries to line crews, as well as damage to your property, carbon monoxide poisoning and more,” said the PUD. “Plug items into the generator, do not plug a generator into a wall outlet or back feed your electric panel.”