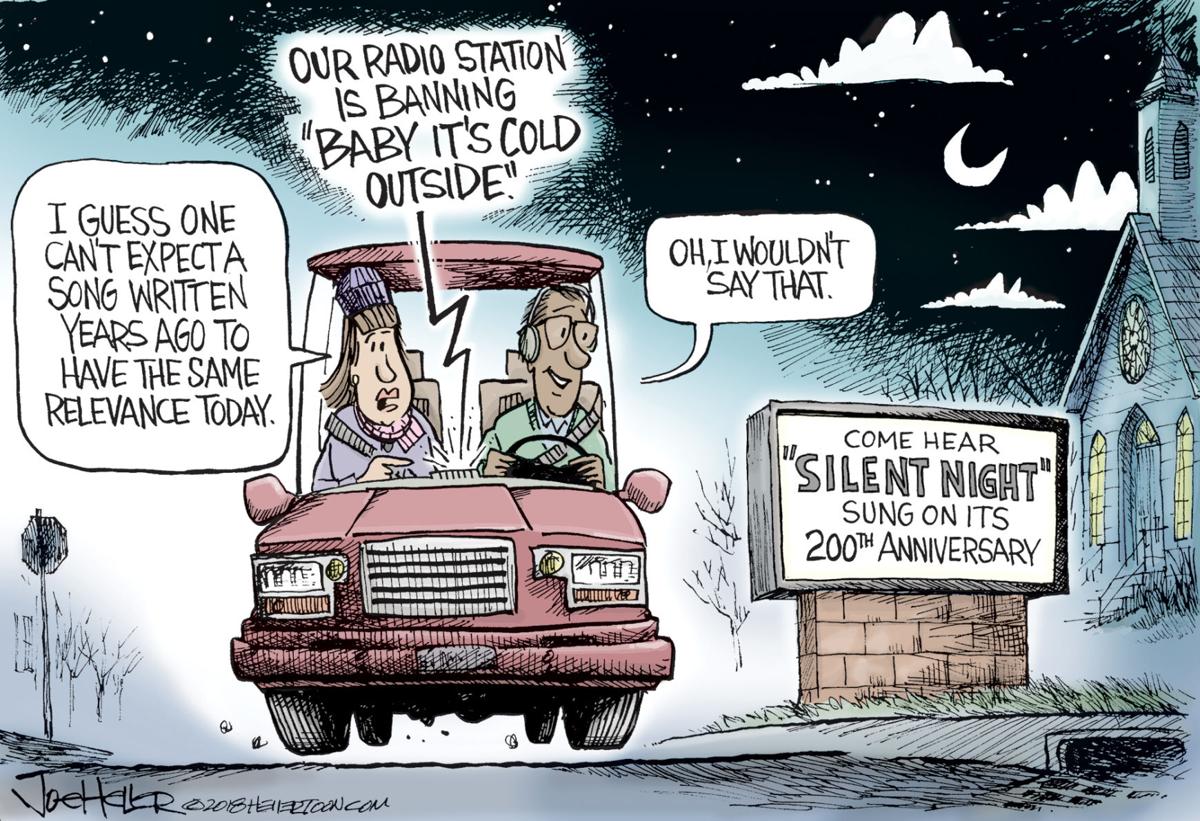 “You’ve got to be kidding me,” my wife exclaimed from the living room.

I sprang from the other end of the house, running to her aid. I assumed a cat vomited on the carpet, or the dog had an accident on the kitchen floor.

“Is everything all right?” I asked, as she calmly sat in front of the TV watching the morning news.

She said, “Radio stations are banning ‘Baby, It’s Cold Outside,’ because the lyrics promote sexual harassment.”

I scratched my head and thought for a moment before pulling a Dean Martin Christmas album off the shelf, dropping the needle in the vinyl’s groove and listening intently.

After a few moments of pops, crackles and white noise, the beautiful orchestral arrangement began playing the famous call and response song.

Honestly, I couldn’t find anything remotely offensive about the fictional love birds in courtship.

But then I starting thinking deeper about political correctness and what, if any Christmas (yes, I just said “Christmas”) songs could hold up to today’s sensitive society.

Assuming we exclude all songs with the word “Christmas” in the title (because the root word in “Christmas” is “Christ”), I came to the conclusion just about every other song will probably offend someone.

• Silent Night (Offensive to those who are sight-impaired and those scared of the dark.)

• Jingle Bells (Offensive to those who are hearing-impaired.)

• White Christmas (That sounds a little racist to me.)

• Blue Christmas (Could be offensive to the color blind.)

• All I Want for Christmas is My Two Front Teeth (This has to be offensive to those with poor oral health and those struggling with meth addiction.)

• I Saw Mommy Kissing Santa Claus (We don’t know if the mother wanted to be kissed. This could be sexually harassing.)

• We Three Kings of Orient (We probably should say Asia.)

• Grandma Got Run Over by a Reindeer (This is likely offensive to those who don’t have a grandmother.)

• Rudolph the Red-Nosed Reindeer (Honestly, why hasn’t ASPCA put a halt to this song? After all, a flying deer may be considered animal abuse.)

• The Little Drummer Boy (This could be offensive to those who are vertically challenged.)

• Frosty the Snowman (How is it right to encourage children to talk to an inanimate object who promotes smoking a pipe?)

• Jolly Old St. Nicholas (The term “Jolly” could be offensive to those who suffer from manic depression.)

I’m sure the list could go on and on. But if you’re easily offended, perhaps you should just turn off the radio.

Songs like “Silent Night” (which marks its 200th anniversary this year) have become part of our culture, tradition, and represent a simpler time in life.

If you are around my house this time of year, you will hear Christmas (yes, I just said “Christmas,” again) music and I will tell you to have a very, merry Christmas.

Brock Hires is managing editor for The Chronicle. He can be reached at 509-826-1110 or via bhires@omakchronicle.com.