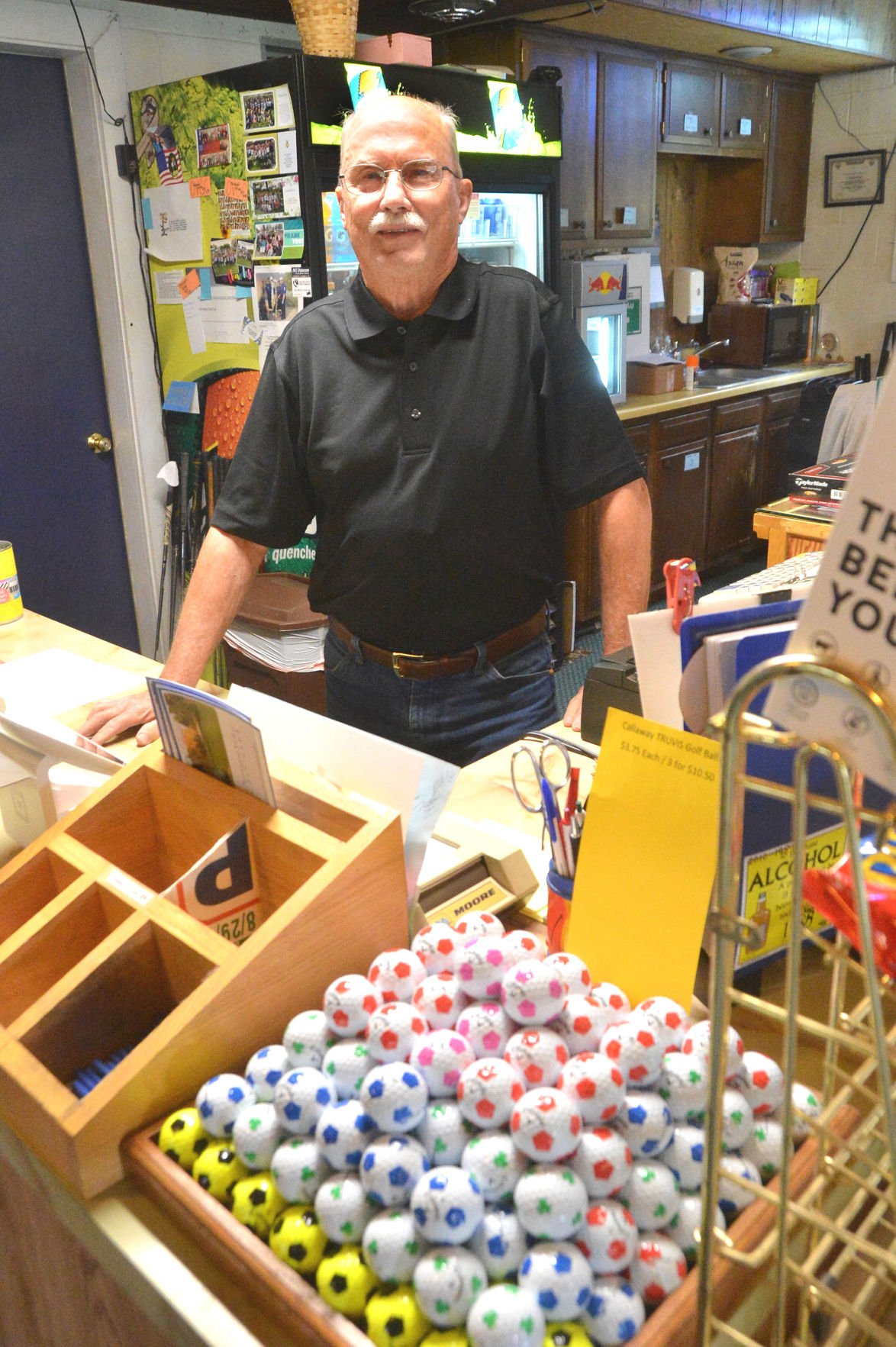 Bill Sproule, shown behind the club house counter, announced he is retiring after 47 years running the Okanogan Valley Golf Club. 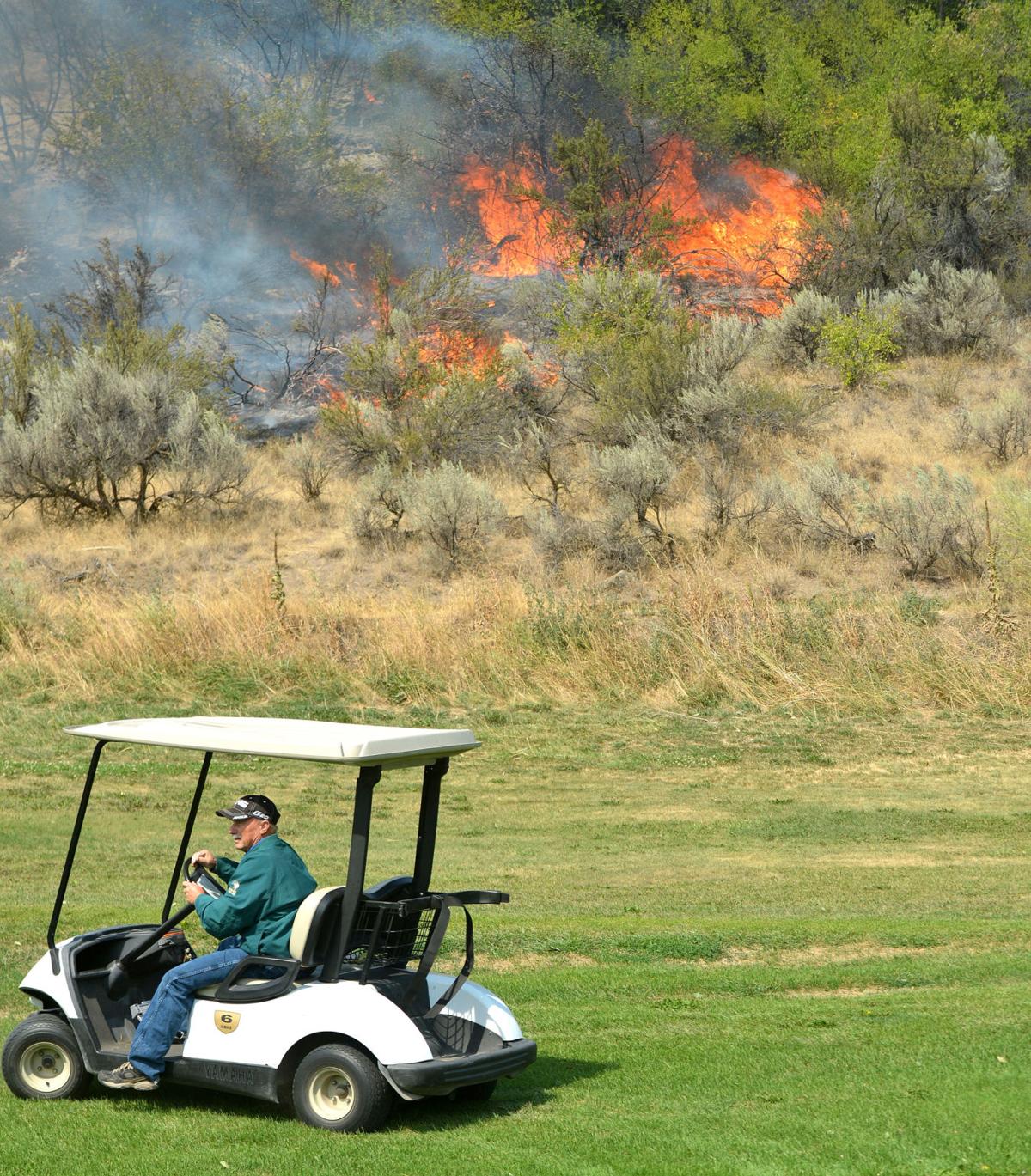 Bill Sproule keeps an eye on the 2015 Okanogan Complex Fire that burned Pogue Mountain and would lead to flooding of the Okanogan Valley Golf Club course in 2016 and 2017.

Bill Sproule, shown behind the club house counter, announced he is retiring after 47 years running the Okanogan Valley Golf Club.

Bill Sproule keeps an eye on the 2015 Okanogan Complex Fire that burned Pogue Mountain and would lead to flooding of the Okanogan Valley Golf Club course in 2016 and 2017.

Party planned for Nov. 2 at the Elks

OKANOGAN – The Okanogan Valley Golf Club, about mid-way between Omak and Okanogan off Danker Cutoff Road, will soon not be the same.

Bill Sproule, 74, announced he’s retiring as the manager of the club, where he’s worked the greens and clubhouse since 1974.

Hors d’oeuvres and drinks will be available.

That same year Bill Sproule joined the PGA and became the club’s professional.

Bob Sproule departed in 1976 for Oregon.

Business is slow right now, as the course readies to close the last weekend of the month.

But over the years it’s been a busy place while being rated one of the top nine-hole courses in the state.

Changes include, besides Sproule’s receding hairline, five new greens and 16 or 17 new tees.

“Two greens were under construction when I came here,” said Bill Sproule.

An addition was put on the clubhouse in 1975, nearly doubling the space.

An underground water system was in place by 1977 (pipes were above ground when Sproule arrived). There’s been work on the maintenance and cart sheds. An outside restroom was constructed.

Windstorms over the years damaged trees and the cart shed, which Sproule kept hoping to fix.

A big blow came after fire in 2015 burned off vegetation that normally holds back water on nearby Pogue Mountain.

Instead, for two years, spring rains caused water to flow off the hill onto the course, raising the water table two feet above holes No. 9 and No. 6

When the water receded in July 2017, close to five tons of hay was cut and harvested, mostly on the ninth fairway.

“The ducks did like it,” said Sproule of the huge pond that formed to the west of the clubhouse.

The efforts of Sproule and the club’s board have kept the course open since it started April 16, 1946.

That’s not true of all courses.

“Our membership is down,” said Sproule. “It started to decline when the mill officially went under.

“During our peak years, things were really good. The last half-dozen years have been a real struggle to make ends meet.”

Sproule commended the membership for keeping the course going, making it a recreational outlet for visitors, both from around the U.S. and Canada, and often being a draw for people considering moving to the valley.

“I think the club will survive,” he said.

Sproule said his proudest achievement might be hard to nail down, although he smiled when mentioning the course’s junior program.

It was started a couple decades back, helping create golfers for the future.

“It will help the golf club down the line,” Sproule said. “Introducing the kids to the game.”

The club’s board will start work on finding a replacement for Sproule starting with its annual meeting in November.

The advertisement might include several possible titles, from general manager to director of golf and PGA professional.

“I oversee pretty much everything,” said Sproule.

The club did bring in Bob Freeman about three years ago as superintendent of the course.

As for what he might do in retirement, Sproule said, “That’s a good question. I will find something.”

One thing he does plan to do as continue to live in the area with his wife, Camille, who has taught in the Omak School District for 37 years.

“We are not leaving,” said Sproule. “She’ll probably teach one more year and probably retire.

“I might volunteer for projects on the golf course, but I have no immediate plans.”

The couple has children living in the Seattle area.

Sproule grew up in Texas, including high school Dallas.

His size – about five feet, 110 pounds – precluded being successful in sports at a school of 3,500 in the top three grades.

Only exceptional athletes turned out for varsity sports.

“I obviously was not where I needed to be,” said Sproule, who entered the Navy in 1967, working in aviation. “I was not big enough to compete.”

Sproule graduated in 1963 from the high school, which won three state titles while he was there.

“I did not golf much growing up,” Sproule. “When I was stationed in Guam there was not much to do. My folks sent some golf clubs. I started playing fairly seriously over there. I enjoyed Guam.”