Starting at
$24.00 for 90 days
Get Started
View all rates
You have permission to edit this article.
Edit
Home
News
Sports
Announcements
Lifestyle
Obituaries
Events
Special Sections
Opinion
Multimedia
Classifieds
Contact Us
E-edition
1 of 3 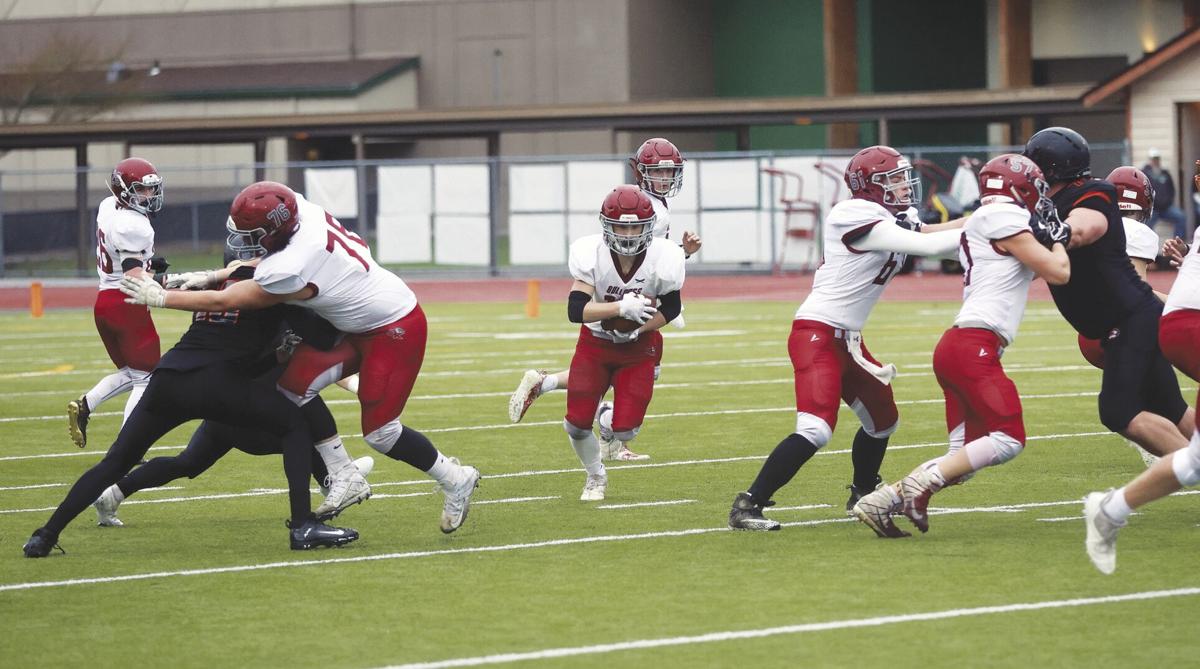 Okanogan’s Tucker Pritchard (14) runs the ball through a gap created by Ty Morgan (left, 76), Tanner Tugaw (57) and Austin Nelson (61) in the Bulldogs’ Nov. 27 game against Napavine. 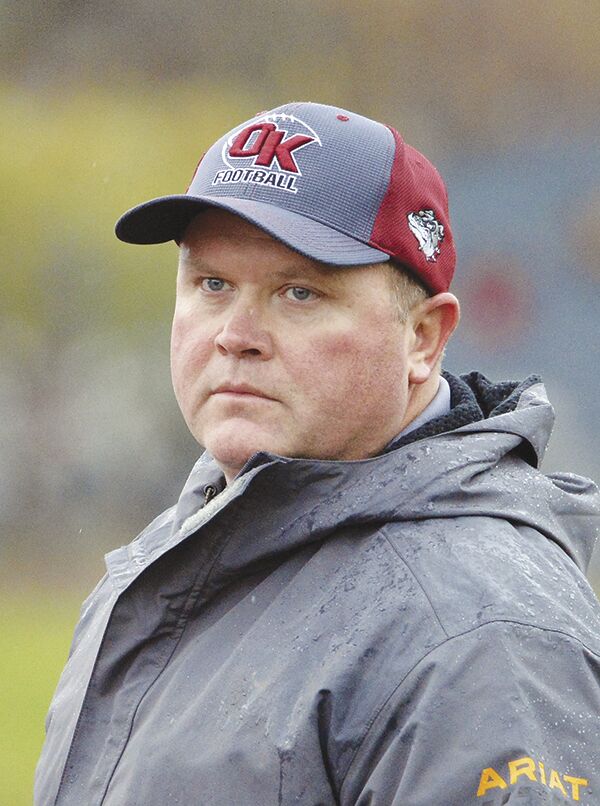 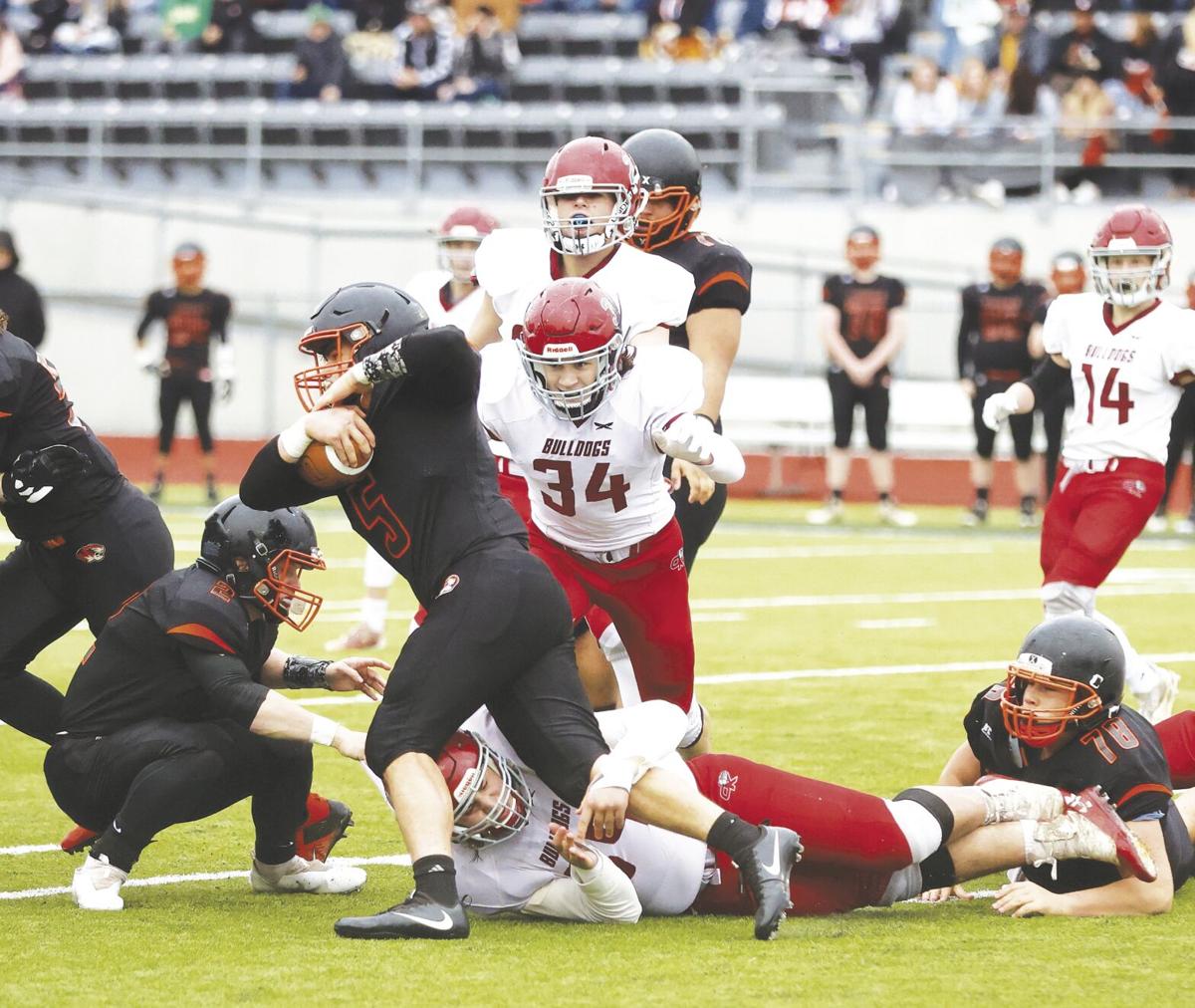 Joseph Cates (69) wraps his arms around the legs of Napavine runner Gavin Parker while Grant Gillespie (34) comes in to finish the tackle.

Okanogan’s Tucker Pritchard (14) runs the ball through a gap created by Ty Morgan (left, 76), Tanner Tugaw (57) and Austin Nelson (61) in the Bulldogs’ Nov. 27 game against Napavine.

Joseph Cates (69) wraps his arms around the legs of Napavine runner Gavin Parker while Grant Gillespie (34) comes in to finish the tackle.

TUMWATER – Okanogan’s bid for the 2B state football championship came to an end Saturday, Nov. 27, with a 42-10 loss to Napavine at Tumwater High School.

“Our team played hard and had a great season,” said Okanogan coach Erick Judd. “This was a fun team to coach. The seniors provided great leadership.”

Okanogan beat Napavine in 2014 and 2015 for the state championship. An Okanogan win would have pitted the Bulldogs against another two-time state rival, Kalama. Okanogan and Kalama are 1-1, with the Chinooks prevailing in 1998 and Okanogan winning the following year.

Instead, Napavine and Kalama will meet Saturday, Dec. 4, for the state title.

In the Nov. 27 game, Napavine scored in the first quarter when Ashton Demarest completed a pass to Lucas Dahl for 72 yards and a touchdown. Brayden Thompson’s kick was good.

The Tigers scored again in the second quarter on a 16-yard keeper by Demarest. The PAT was good.

Okanogan got on the board with 1:36 left in the second quarter as quarterback Brad Ingram ran for nine yards. CJ Nelson’s PAT was good.

The Bulldogs scored again with four seconds left in the half on a 26-yard field goal by Nelson. That left the score at 14-10 at the half.

Napavine struck three times in the third period, first on a Gavin Parker run for three yards and the touchdown, then on an interception by Glade Shannon of an Ingram pass. Ashton Demarest rounded out the quarter’s scoring on a 20-yard run. All three of Thompson’s PATs were good.

The Tigers tacked on another touchdown in the fourth quarter as Lucas Dahl ran for 65 yards. The PAT was good.

Napavine had 410 yards of offense, including 117 yards passing and 293 on the ground. Okanogan had 171 yards overall, with 78 through the air and 93 rushing.

The Tigers saw penalty flags 10 times for 90 yards, while the Bulldogs were penalized seven times for 55 yards. Each team had two turnovers.

Okanogan has appeared in four state title games since 1974, according to Washington Interscholastic Activities Association statistics. The Bulldogs won the championship in 2014 and 2015, beating Napavine both times, and in 1999, beating Kalama.

Kalama beat Okanogan for the title in 1998.

Since 1974, Okanogan has participated in state playoffs 19 times (including this year).