Starting at
$22.00 for 90 days
Get Started
View all rates
You have permission to edit this article.
Edit
Home
News
Sports
Announcements
Lifestyle
Obituaries
Events
Special Sections
Opinion
Multimedia
Classifieds
Contact Us
E-edition
1 of 2 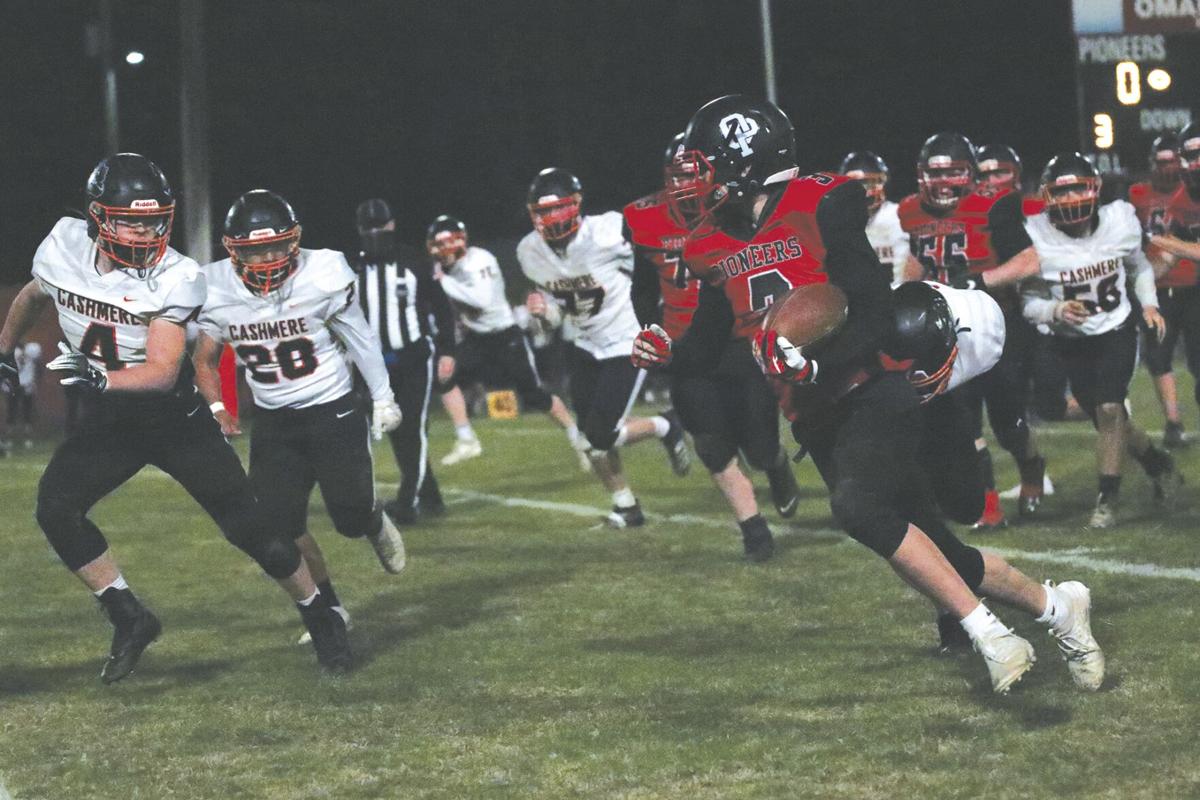 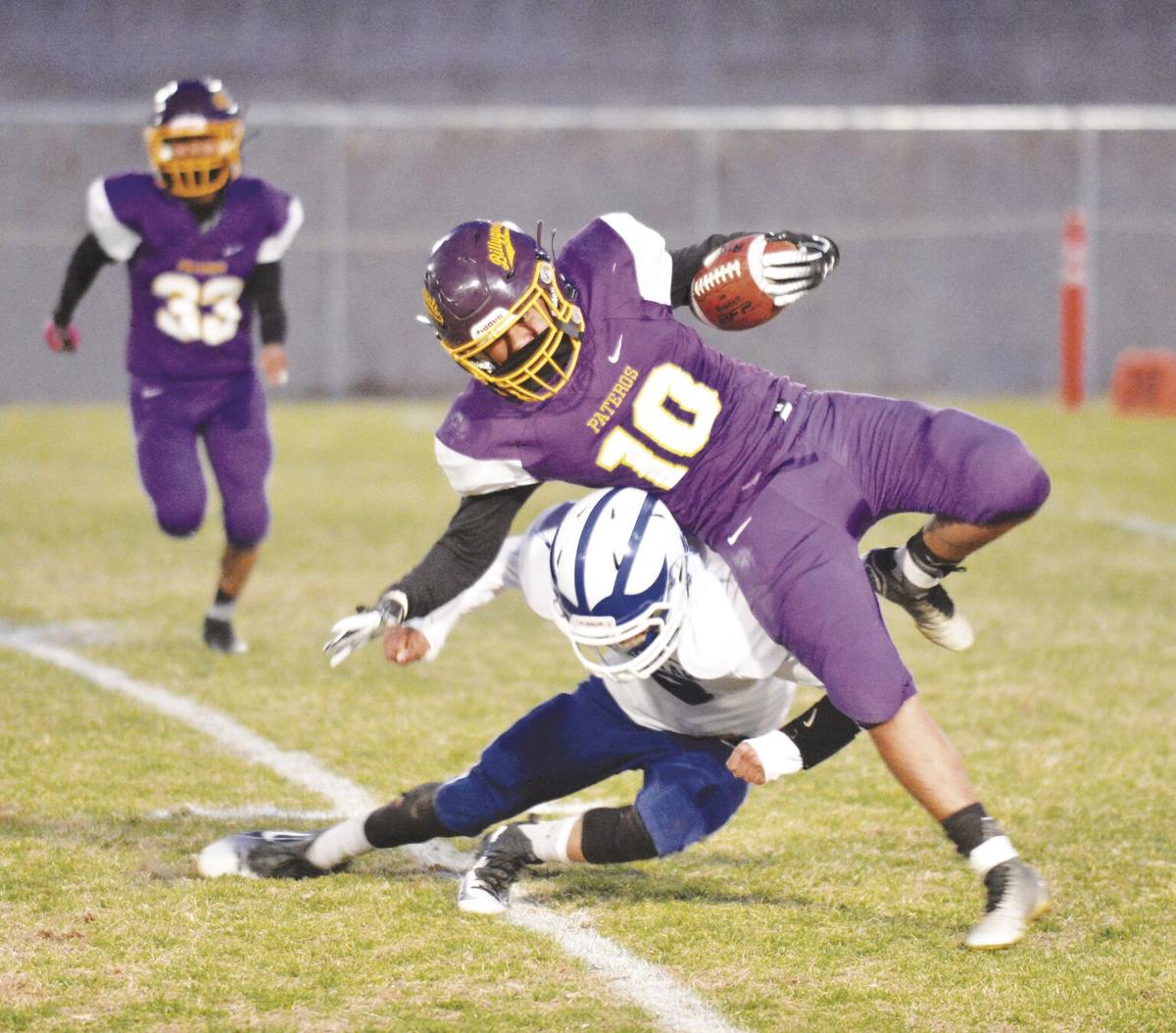 Pateros’ Chris Poore (10) fights for yardage against Soap Lake’s Diego Garza during their teams’ game March 25 in Pateros. Miguel Solis (33) follows the play for the Billygoats.

Pateros’ Chris Poore (10) fights for yardage against Soap Lake’s Diego Garza during their teams’ game March 25 in Pateros. Miguel Solis (33) follows the play for the Billygoats.

The Pioneers got off to a slow start and were down 15-0 at the half, said coach Nick Sackman.

In the second half, “we came out fired up and marched down the field on the first possession and scored to cut the lead in half,” he said.

After that it was a defensive battle all night with both teams making stops, both defenses keeping the opposing offense in check most of the night making yards hard to come by for both teams, he said. Cashmere scored in the final minute to put the game away.

Kessler Fjellman carried the load on the ground with tough running for 70 yards on 24 carries, said the coach.

“Defensively, we played one of best games of the year,” said Sackman. “We were physical at the point of attack and really shut down the running lanes and put them in a lot of three-down situations. Offensively, it took a half to get going and we looked much better in the second half, and we had our chances to punch a couple in but got stopped in the red zone.”

Omak’s final game of the season is set for Friday, April 2, at Cascade.

Passing - Beau Sackman, 8-for-17 for 118 yards, one touchdown, one interception.

The Billygoats struggled with turnovers and had trouble getting its offense going in a 35-8 loss to Soap Lake on March 24 at home.

“We came up short against a good Soap Lake team,” said coach Marcus Stennes. “We played good defense the first half but just couldn’t get anything going offensively. We struggled with turnovers and could only find the end zone once.”

Soap Lake scored in the first and second quarters for a 28-0 halftime lead. Pateros got a safety in the third and scored a touchdown in the fourth.

Pateros’ Dylan Bosch went 9-for 25 passing for 93 yards and three interceptions. Chris Poore was 1-for-1 for 20 yards, had 10 yards rushing for 43 yards and two catches for 28 yards.

On Defense, Josh Smith had nine tackles, and Solis and Anthony Medel had six apiece.

“We are now refocused on Entiat at home on Tuesday, March 30,” said Stennes.

That game was played after The Chronicle’s deadline.

Manson came from behind with 15 second left on the clock to top Tonasket, 24-20, March 26 on the Tigers’ field.

The one-yard run by Caden Beazley and subsequent two-point conversion accounted for the Trojans’ first lead of the game.

Manson then stopped Tonasket on consecutive plays to end the game.

The winning drive was setup up by a 30-yard brother-to-brother pass from Caden Beazley to Cal Beazley to put the Trojans on the five-yard line.

“It was pretty special to watch Caden, a senior, throw the ball to his freshman brother,” said Manson coach Joe Johanson. “Better yet, one of the passes was to set up the winning score.”

Manson had been down by 12 in the fourth.

Johansen said the defense kept his team in the game all evening. Many players contributed on defense and the Trojans had three key stops in the fourth quarter, including a third and short stop with 1:50 left in the game.

On offense, the Trojans had five turnovers.

“I put Caden Beazley at QB after losing our QB, Angel Lopez, last week due to an injury,” said Johansen. “He does anything the coaching staff asks and even though it wasn’t pretty, I believe he kept us in the game by commanding the offense.”

Caden Beazley had four interceptions, “but then he also gives you the ability to drop back and then take off for a 60-yard TD run,” the coach said.

Sophomore Hervin Chavez filled in at running back and had “a couple of nice runs to keep the chains moving,” Johansen said.

Chavez also had six tackles and one tackle for loss.

“I don’t think centers get enough credit,” said Johansen. “Alex has been snapping great for us all year and that continued” Friday.

Tonasket coach Jay Hawkins said his team played great, but just didn’t get the favorable bounce down the stretch.

“We played our most physical game this year,” he said. “This team has continued to improve from week to week. We are looking forward to a great week of practice.

But Bridgeport’s defense couldn’t hold up and the team let a 10-point lead slip away.

“Entiat scored the tying touchdown and two-point conversion with about eight seconds left in regulation,” said McDougal. “We had a last-second heave down the field, which was caught, but senior captain Tony Flores was brought down before he could reach the goal line.”

Liberty Bell got off to a slow start but turned up the heat in the second half to take a 36-0 victory over Waterville-Mansfield on March 26.

“Waterville is always a tough game,” said Liberty Bell coach Jeff Lidey. “After only leading 8-0 at the half, it was time for our boys to wake up and play like the fourth-ranked team in the state. We had a slow start and Waterville-Mansfield was pumped.”

Lidey said he called an impromptu time out after Waterville stopped the Mountain Lions on fourth down.

“I just wanted to take a minute to remind my Mountain Lions who they are,” he said. “Seemed like that is all it took. They regained their composure and took the ball back the very next play. They never let the Shockers get close to scoring again.”

Liberty Bell’s offense had a little trouble getting going and missed offensive guard Alex Tareski, who was competing in the biathlon junior nationals.

But Lidey said he never was worried.

“I just needed the boys to believe in themselves and be patient. They did, and it paid off,” he said.

Brewster traveled to Oroville on March 26 and left with a 66-14 victory.

“The first half of the game, Oroville had our opportunities to make it a competitive contest and we did not capitalize,” said coach Rick Clark. “Once again, fundamentals hurt us. You have to be fundamentally sound against a well-coached team like Brewster.”

Okanogan got off to a quick start in the Bulldogs’ matchup with Lake Roosevelt on March 26 as McKade Peterson ran for 100 yards and a touchdown with 10:43 left in the first quarter.

Jaime Gonzalez kicked the PAT to put Okanogan up, 7-0.

Lake Roosevelt answered later in the quarter with an 11-yard pass from Hunter Whitelaw to Sam Wapato. Jaimen Schmidt’s PAT was good.

The Bulldogs struck again in the first, with six seconds left, on a Peterson run for 14 yards. Gonzalez’ kick was good.

Okanogan scored again in the second quarter on a 51-yard run by Bo Silverthorn. Gonzalez added the PAT.

In the third, Brad Ingram ran for two yards and Okanogan’s last touchdown of the game. Gonzalez’ kick was no good, leaving the score at 27-7.

Okanogan amassed 442 yards on offense, racking up more than 10.5 yards per play. The team had 404 yards on the ground. Lake Roosevelt had 153 yards of offense for 2.7 yards per play, with 55 yards rushing.

“I thought we played hard and played very well as a team,” said Okanogan coach Erick Judd. “McKade Peterson had a great day with seven carries for 170 yards and two TDs.”

Okanogan’s Kolbe Tverberg was one of several student athletes named by the Washington Interscholastic Activities Association as an athlete of the week for week 5.

“The senior is a three-sport student athlete who volunteers in his community, (is) a four-year FFA member and a leader of his team,” said WIAA.