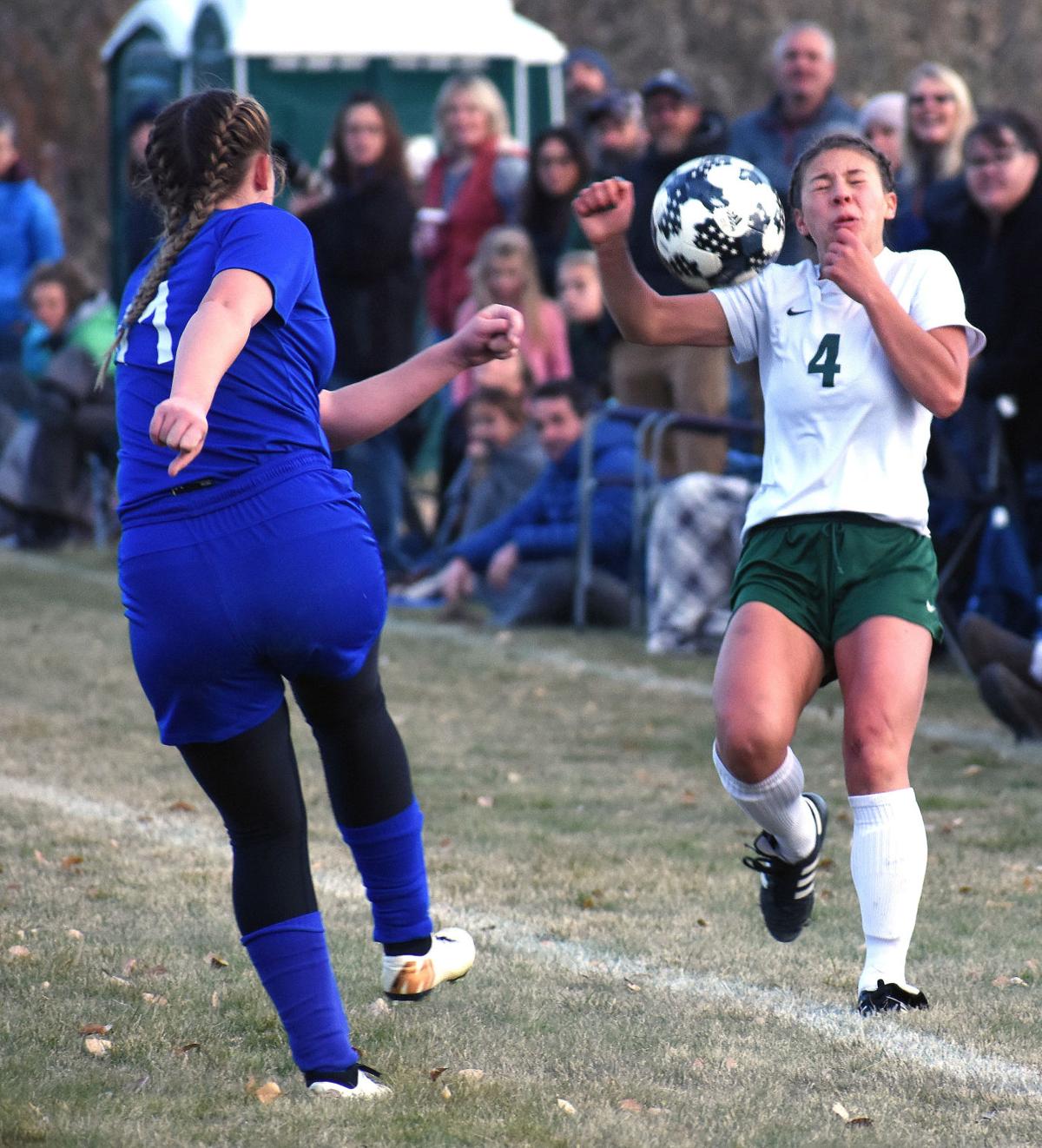 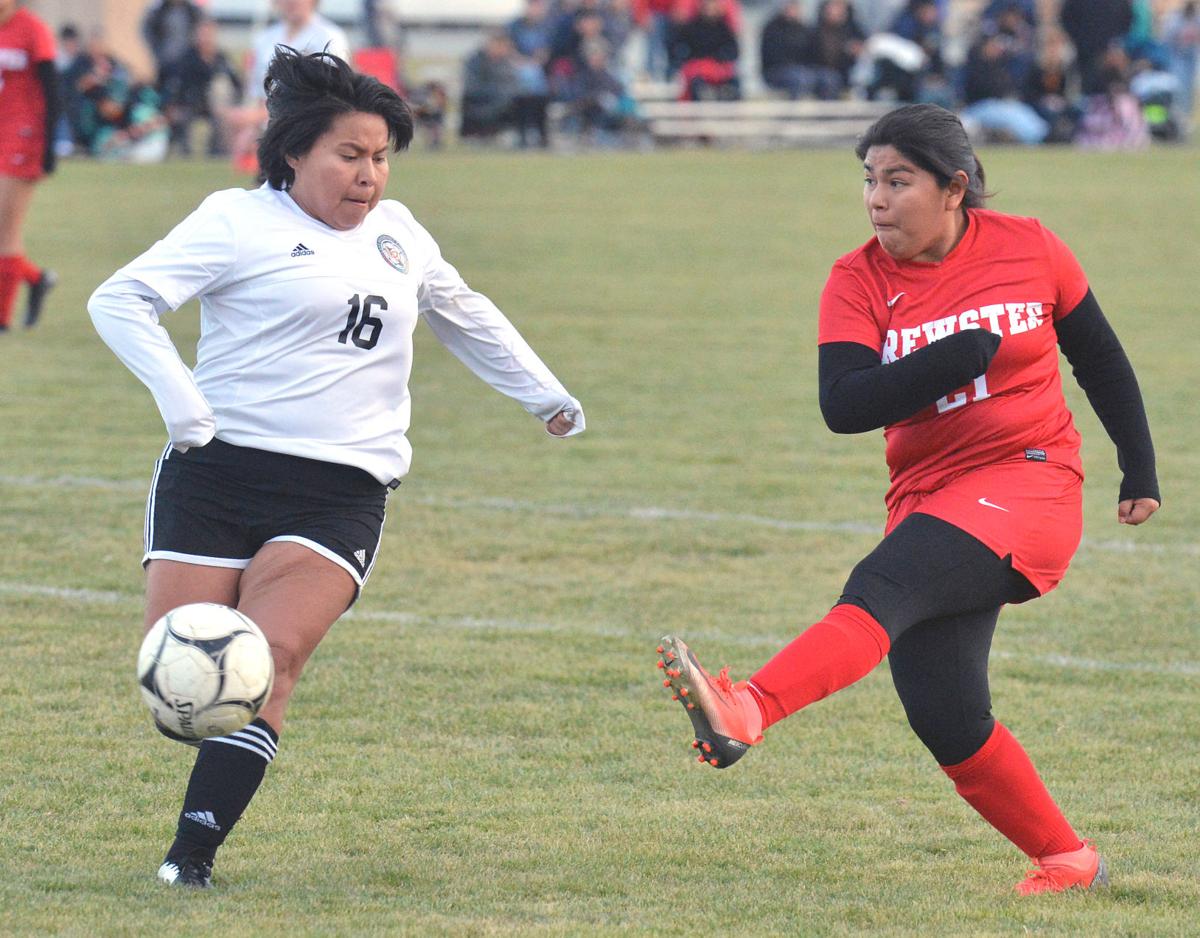 WENATCHEE – Cashmere ended Okanogan’s soccer season 2-1 in overtime at during a 1A District 6 playoff on Tuesday, Nov. 5, at the Apple Bowl.

Cashmere took the lead around the 15th minute of the 80-minute match.

“It went back and forth until the 75th minute, when our senior, Mya Moses, scored,” Okanogan coach Dean Klepec said. “Tamara Mathison crossed the ball in, and Afton Wood got a foot on it to deflect it to Mya Moses who shot it over the goalie, who was a little off of her line.”

In the second of two five-minute overtimes, Cashmere scored the winner.

“We played great, the best game we played all year,” said Klepec. “We were very aggressive and pressed high a lot of the game. We decided that if we were going to have a chance to win, we had to be more offensive. And press our defense to the half line and just run them down if they played the ball behind our line.

“Our defense and goalie played outstanding and did a great job. Offensively, we got more shots and scoring opportunities than we had in the two previous games with Cashmere combined.”

Klepec said of Moses, the team’s lone senior, “This year she did an amazing job playing all year but more importantly was a great leader of a very young team. Mya will be the first girls’ five-year letterman and five-year starter for our school.

“She has been a huge asset to our team and the Okanogan soccer program.”

Okanogan opened district with a 4-0 win over Chelan on Nov. 2.

Cashmere fell out of the playoffs with a 1-0 loss to Freeman in a crossover game Nov. 9.

The Scotties, with the win, advanced to state.

Cascade, which upset Cashmere 1-0 In the first round of district, reached state with a 2-1 win over Deer Park in a crossover match Nov. 9.

In other crossover matches, Freeman topped Cashmere 1-0 and Cascade reached state with a2-1 win over Deer Park.

NEA No. 1 Lakeside received a crossover bye after knocking off Freeman 2-1 and Deer Park 2-1.

The Bears scored first in regulation, going up 1-0 with a goal from Kelsey Ochoa that slipped past the outreached arms of Chloe Sprauer.

“Great shoot from 30 yards out,” said Brewster coach Alex Sanchez. “We lost in shootouts, but the girls had their best game so far with great passing. Very happy with the great effort from all our players.”

A handball called in the Bears’ box led to a penalty kick by Tommie Ochoa that tied the match in the second half.

“We thought we had the go-ahead goal late in the game on a beautiful shot from Adee Smith,” said Liberty Bell coach Lincoln Post. “But the goal was overruled by the AR (assistant referee on the line) and we continued on with the tie through overtime.”

The match would go to a shootout, where Liberty Bell inserted Ochoa in goal based on her experience.

“Although Chloe Sprauer had an excellent game in goal Tommie has had more experience with shootouts, so she went into goal,” said Post.

Ochoa made four saves, including two on dives.

Ochoa stopped the Bears shot then switched with Hurtado to put Liberty Bell up 1-0.

Brewster’s Hallie Aparicio tied it, 1-1, with a shot to start the second round.

Ali Palm’s kick would be stopped by Hurtado.

In the third round, Brewster’s Miriam Garcia made her shot to put the Bears up, 2-1 while Liberty Bell’s Wyatt Albright sent her shot wide right.

In round four, Brewster’s Brittany Perez kicked wide of goal before Hurtado stopped the kick of Jess Dinham.

In the fifth round, Ochoa made a stop before Megan Voight scored to tie at 2-2 and send the game into sudden death.

Jennifer Valdovinos missed at the top of the sixth round, the ball sailing over the goal.

Hurtado then gathered up a hard show by Maya Sheely.

Ochoa made a save in the top of the seventh round, diving to her left to deflect a kick by Hurtado.

Liberty Bell’s Cymone Van Marter got her shot past Hurtado into the right corner for the winner.

TONASKET – Liberty Bell secured a quarterfinal berth to state 1B/2B tournament with a 6-5 win over Tonasket that included a shootout Nov. 7.

In the semifinals Nov. 5, Tonasket won 6-3 over Lake Roosevelt and Liberty Bell edged Brewster 2-1 after a sudden death shootout.

“This past week was probably the most exciting soccer that I have ever been involved with,” said Liberty Bell coach Lincoln Post, whose team won. “Wow, two matches determining the outcome for the state tournament and both going to shootout.

“In both of these matches the team play and effort was outstanding by all of the players. We are really finding our strength at the right time in the season.”

This will be the eighth straight trip to state for Liberty Bell, which finished second in 2014 and was fourth twice (last year and 2016).

In five other state appearances before the current run, the Mountain Lions made state five times (13 total now) with a best finish of fourth in 2003, the first year Liberty Bell made state.

Tonasket, in another 1B/2B cross over match, fell 6-1 to Davenport on Saturday.

“We as coaches not only try to develop skills and tactical strategies,” said Post. “But most importantly we try to develop a team chemistry where the players trust each other and play as a whole, going beyond where they can as individuals.

“Both of the games this week showed an incredible resiliency and team effort that surpassed any of our previous games this season.”

BREWSTER – Brewster won 4-0 on Nov. 2 over Mabton, a winner over Manson in a pigtail game to the District 6 tournament.

Kelsey Ochoa scored two goals and assisted on two others.

BREWSTER – Brewster got a lead early and never looked back in topping Lake Roosevelt, 5-1, in a District 6 playoff match Nov. 7.

The Bears earned the No. 3 berth to crossover matches with Northeast District 7.

Lake Roosevelt played with no subs.