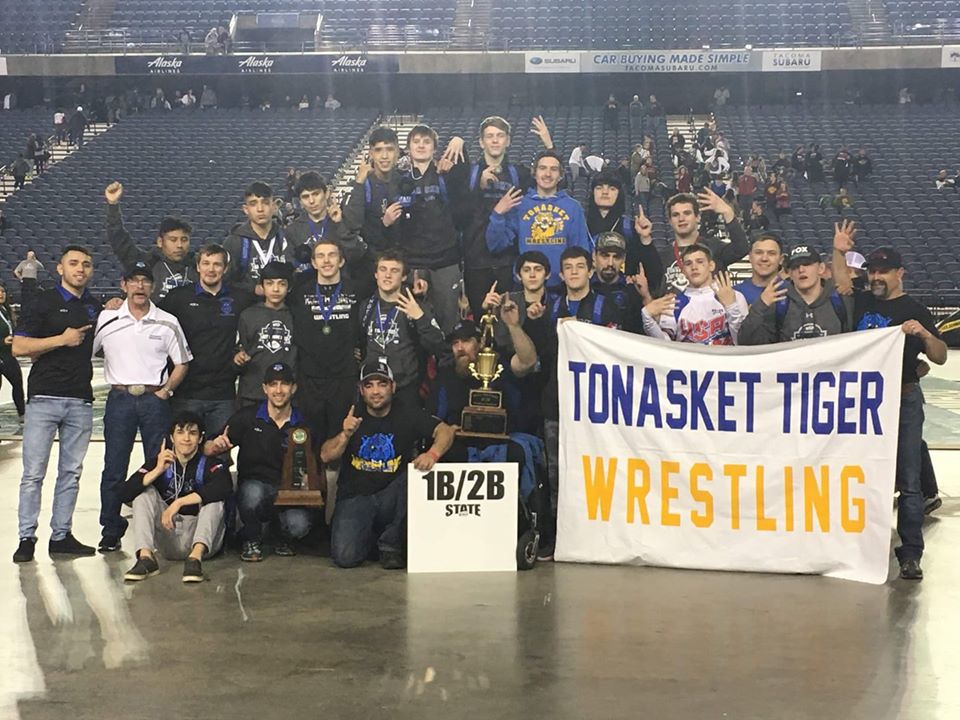 The Tonasket Tigers pose with their fourth consecutive wrestling championship. The team earned more points over the weekend than any other team in any division, bringing home seven individual championships as well. 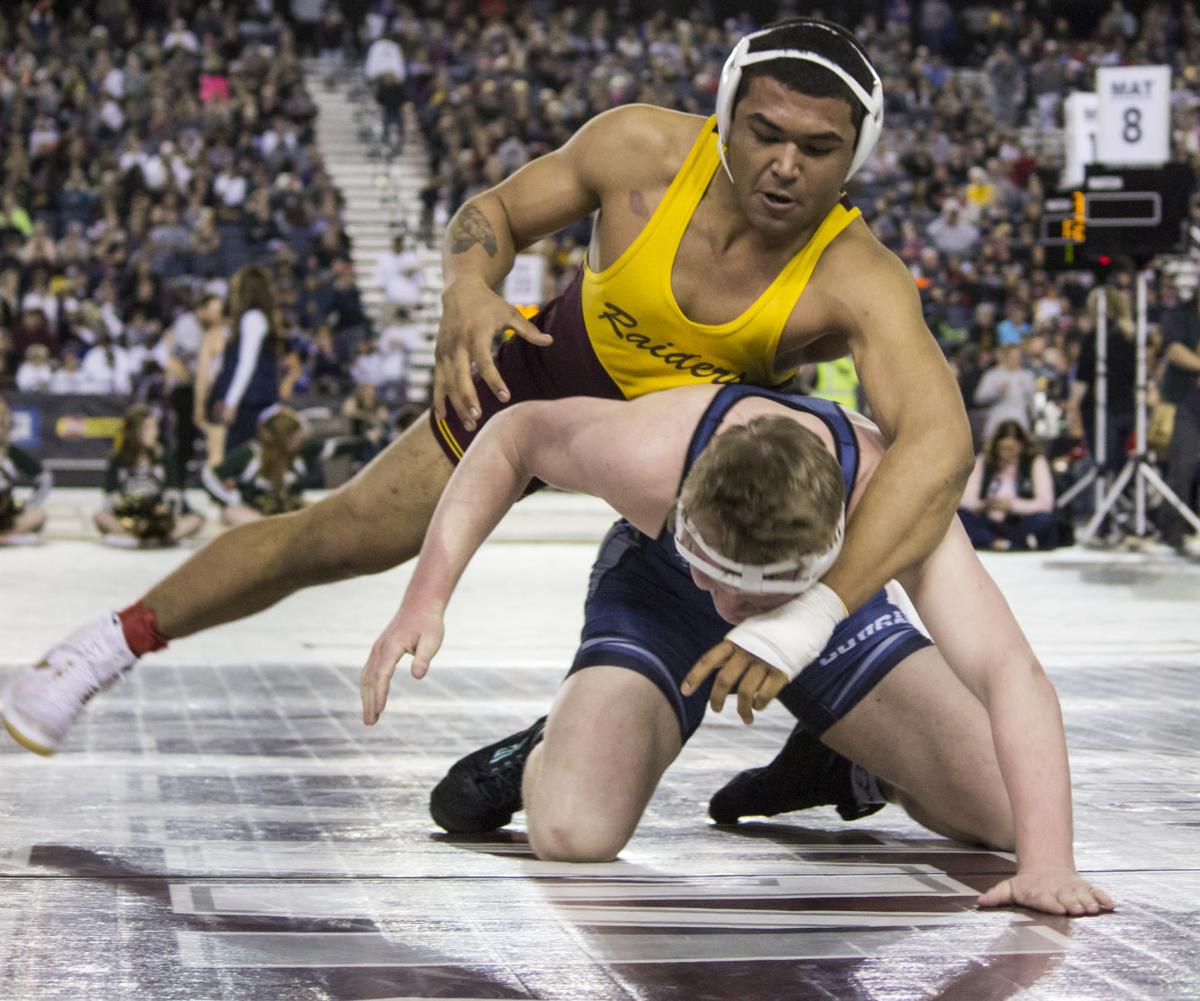 Trevon Johnson of Lake Roosevelt gets into position to attempt to pin his opponent at the Mat Classic at the Tacoma Dome Feb. 19-Feb. 21.  Johnson came out with a fifth-place medal at the end of the competition, adding much-needed points to the Raiders team score. 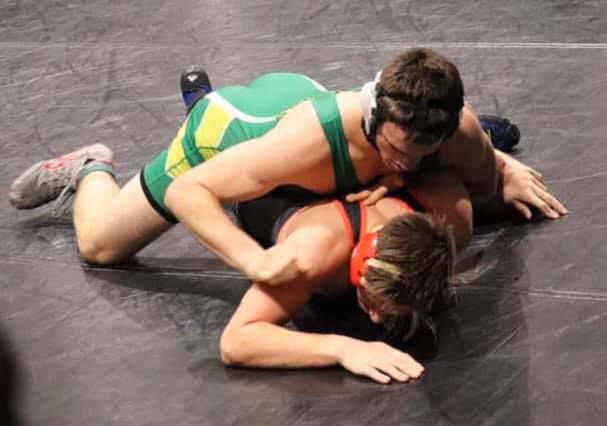 Bodie Paul of LIberty Bell grapples with his opponent at the Mat Classic in the Tacoma Dome on Feb. 21. 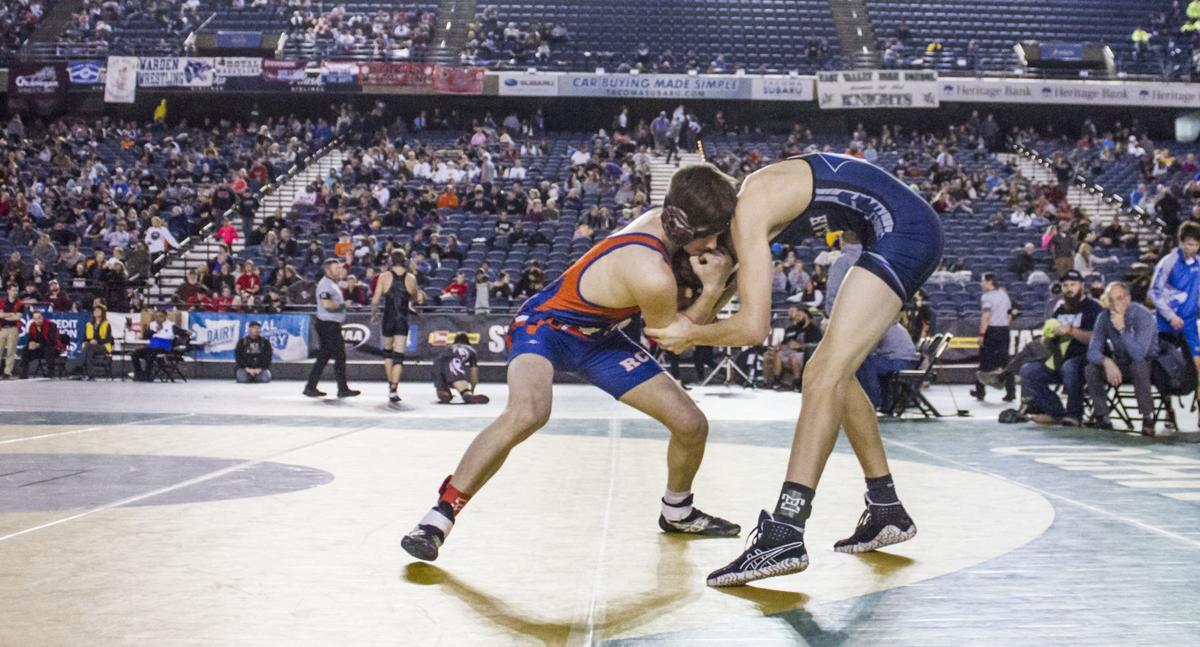 A Republic-Curlew wrestler fights to end his season on a high note at the 2020 Mat Classic at the Tacoma Dome Feb. 19 - Feb. 21. 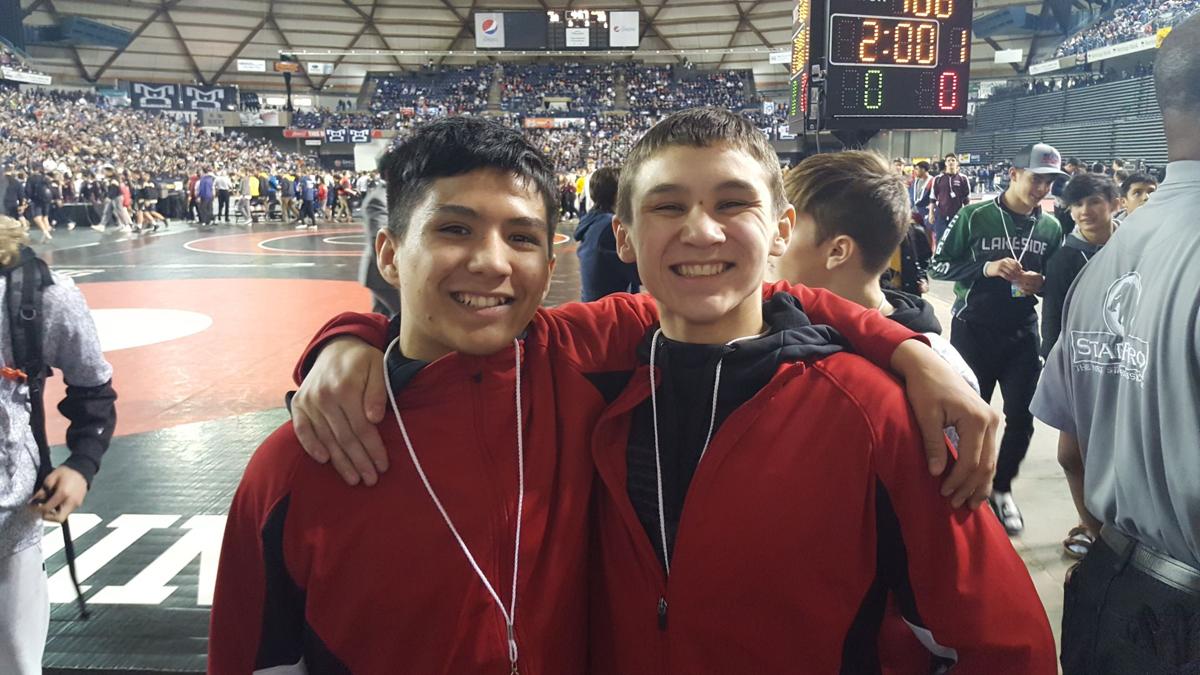 Omak’s Caden Johnson (left) and Kessler Fjellman (right) pose with their newly earned hardware in the Tacoma Dome on Feb. 21 after competing. 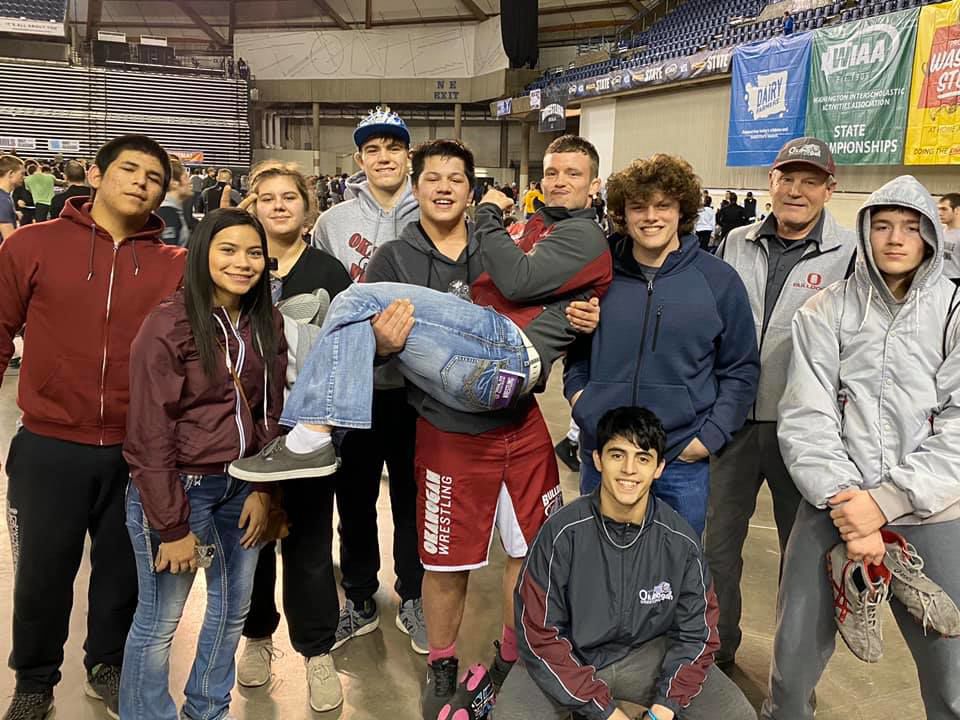 The Okanogan wrestling team poses for a shot before the Mat Classic in the Tacoma Dome on Feb. 19. The Bulldogs would go on to have one wrestler bring home hardware, Makayla Duran taking sixth-place, the highest placement ever for an Okanogan female wrestler.

The Tigers finished with seven individual champions and a team total of 294. Liberty (Spangle) was second with 123 points.

Last year Tonasket had five champions and scored 348 points, setting a new state record point total for all classes. The Tigers held the previous record, set in 2018, at 286.5.

For the second time since five classifications were started for state wrestling, all five team titles went to eastern Washington teams. The first time was last year.

Only the girls’ team title went to a western Washington school, White River.

“To come away with seven state champions in the first seven weight classes is definitely rare and might not have been done before,” said coach Cole Denison. “I am very proud of all the wrestlers that made it through the season and contributed to a finish that we will never forget.”

He also acknowledged his coach staff and support system.

“This couldn’t be done without all of them,” he said.

Lazaro Soria (106) took his weight class with a clean sweep of wins. He started with a bye round, then beat Aksel Espeland of Darrington by fall at 3:18, Isaac Rodriguez of Mabton by decision of 8-6 and Colton Jackson of Lake Roosevelt by decision of 10-8.

Waylon Thomas (113) also started with a bye round, then beat Steven Nicholsen of Friday Harbor by fall at 1:07, Bryan Dickerson of Life Christian Academy by fall at 4:47 and Johnny Ryan of Ritzville by major decision of 11-2, bringing it home as Tonasket’s second gold medalist.

Lane Bolich (126) brought in championship No. 4 with another clean sweep. He began with a bye round and defeated each of his opponents by fall: Porter Carman of Selkirk at 3:28, Sammy Manina of Northwest Christian at 3:19 and Ethan Hull of Reardan at 2:48.

Kevin Sanabria (132) took championship No. 5 with the initial bye round, then by beating Tristan Wood of Almira/Coulee-Hartline by decision of 6-1, Robert Reed of Concrete by fall at 5:15 and Justyce Acosta of Chewelah by decision of 6-1.

Colin Silverthorn (138) won his weight class by initially having a bye round, then beating Kolby Mozingo of Onalaska by fall at 1:32, Christophe Lake of Ilwaco by fall at 1:23 and Ian Campbell of Kalama by decision of 8-4.

Carsen Walten (145) won the sixth championship for the Tigers by passing through his bye round, beating Michael Small of Mary Walker High School by fall at 4:10, Clay Jeanneret of Chewelah by fall at 1:21 and Enrique Long of Tonasket by decision of 8-1.

Other placers of the day were Enrique Long (145), who took second by having a clean sweep until he met with his teammate, Carsen Walten, who won the weight class. He had a bye round first, then beat Trey Rego of Toledo by fall at 1:36, Alex Placenia of Davenport by decision of 11-9 and then fell to Walten.

Austin Brock (170) also took second place by beating Breadyn White of Pomeroy by a major decision of 13-5 and Jesse Turner of Liberty (Spangle) High School by fall at 5:57, but lost to Kaden Krouse of Chewelah in the championship round.

She beat Nicole Poussier of White River, then fell to Riley Aamold of Union. In the consolation bracket, she beat Alexandria Kauffman Temple, Olympia, and then Ebonney Bowhay of Mount Baker for the fifth-place medal.

Liberty Bell, Brewster and Pateros each sent one wrestler.

Bodie Paul (152) of Liberty Bell brought home a silver medal, losing to Rylan Anderson of Reardan in the championship.

Brewster’s Gabe Garcia (160) of Brewster took sixth place in his weight class. Nathaniel Hart of Pateros did not place.

TACOMA — Omak and Okanogan each had competitive wrestlers in the Mat Classic XXXII 1A division.

Omak left with two state placers Kessler Fjellman, who took third at 126, and Cayden Johnson who took eighth at 120.

Okanogan’s Makayla Duran placed sixth at 235 in the girls’ competition, which included all school divisions.

For the Pioneers, Tameron Hall (106) started his Mat Classic competing against Oscar Alvarez of Granger, who went on to win the championship in his weight class, and lost by a fall at 1:23. He then lost to Conner Demorest of Forks by a major decision, 9-1.

Johnson (120) had a win in his first match against Aaron Lano of Montesano by fall at 4:22, then lost to Jonathan Magana of Connell by fall at 1:03. He then went on to beat Christophe Rathjich of Mount Baker by a decision of 13-8. He lost the next two matches to Aden Carl of Medical Lake by decision of 9-3 and Jose Toscano of Granger by a technical fall at 2:52. The final round against Toscano secured his eighth-place medal for the Pioneers.

Omak’s Jermain Watkins-Clark (220) started off his mat classic with a win over Emilio Castillo of Connell by a major decision of 12-4. He lost his next two matches against Richard Rivas-Gutierrez, Vashon, by fall at 2:23 and to Cristobal Alejendre, Zillah, by fall at 0:52.

For Okanogan, Johnny Swartzel started off with a loss to Mason McBride of Granite Falls by a major decision of 11-3. He won his next bout against Manuel Torres of Granger by a decision of 3-0. Swartzel lost his third bout to Jared Garcia of Zillah by a decision of 4-3.

James Smith (220) also came out winning his first match against Cristobal Alejendre of Zillah by a decision of 11-8. He lost his next two matches, first to Cody Deason of Sultan by decision of 6-4 and then to Elisio Castillo of Connell by a decision of 2-1.

Duran made it to the medal rounds and brought home a sixth-place medal at 235.

She is the first Okanogan female wrestler ever to place at state.

Her competition started with a loss to Anna Schander of Stanwood by fall at 4:43. She won her next bouts, first over Regan Schaefli of Prairie by fall at 0:32, then over Evelyn Taylor of Bremerton by fall at 2:07, last over Aliyah Draisey of Kamiaken by decision, 5-2.

She lost her next two matches, first to Schander, who she met again in the consolation bracket, by fall at 3:47, and then to Frances Kava of Spanaway by fall at 1:23. Duran brought the only hardware home for the Bulldogs.