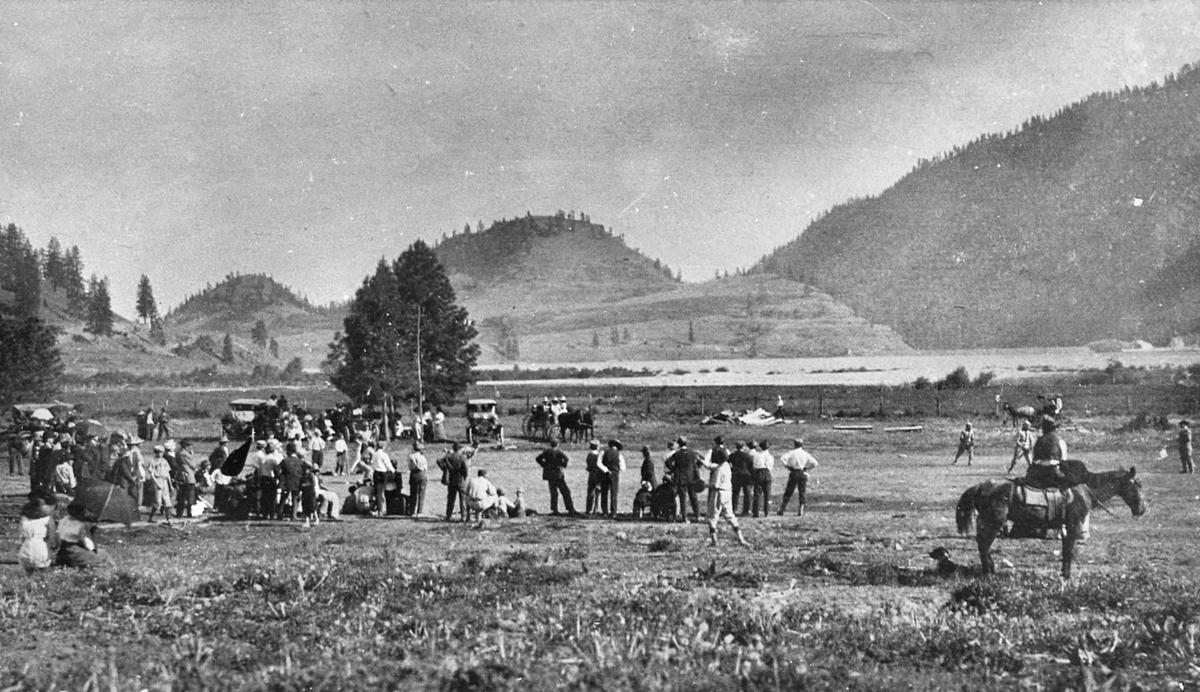 A 1913 baseball game pits Okanogan against Conconully, with Conconully Dam and reservoir in the background. 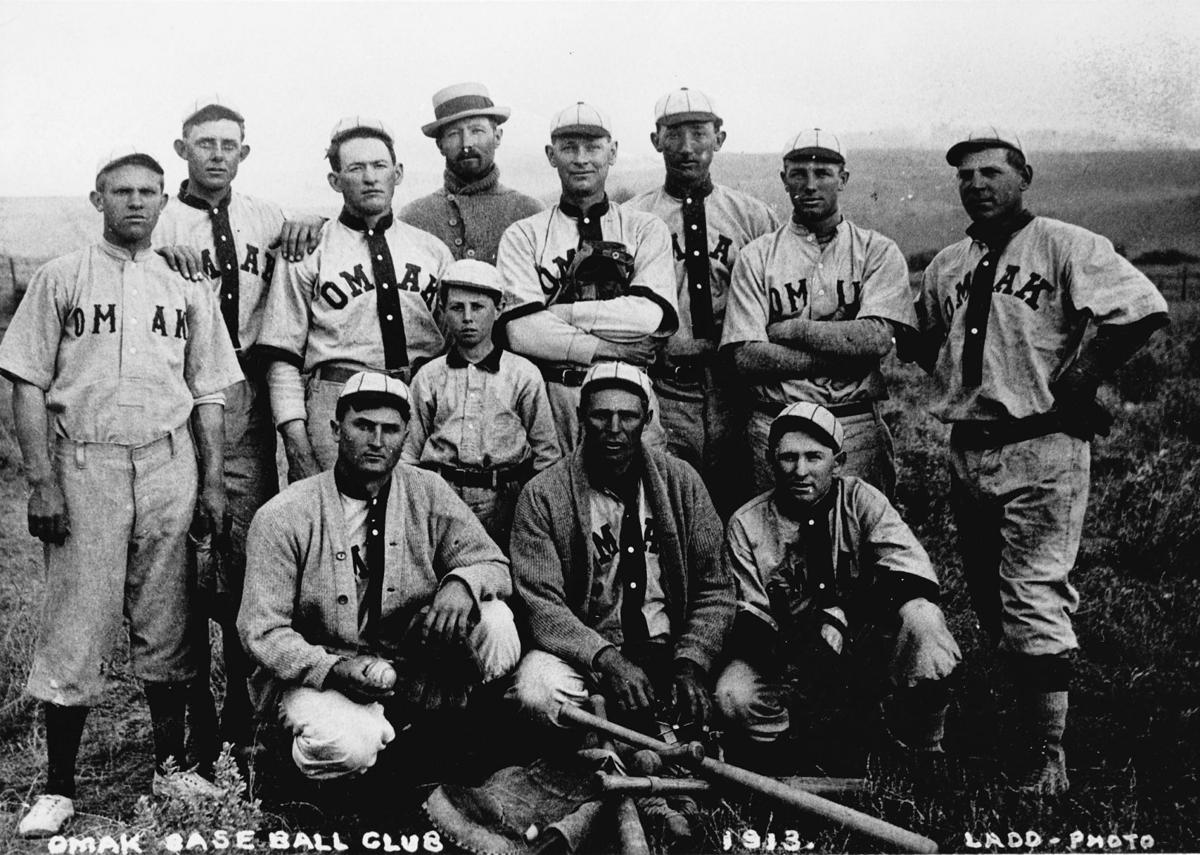 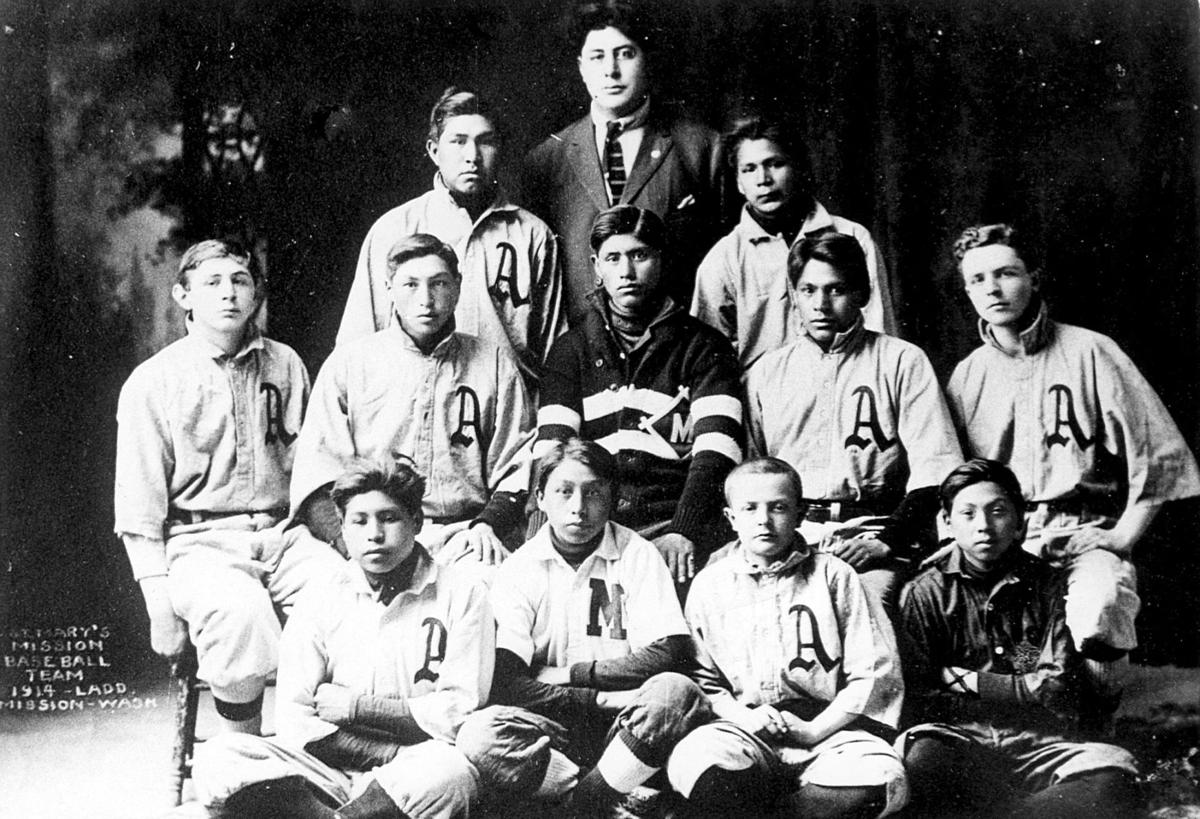 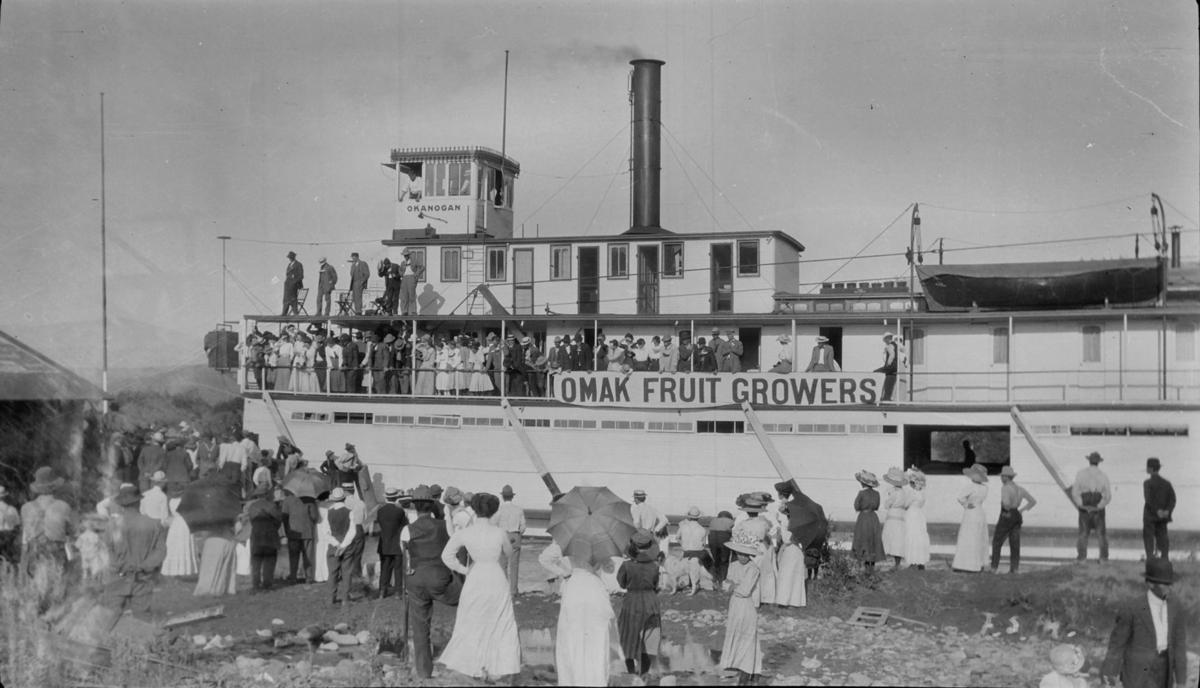 A steamboat leaves, probably from a stop in Okanogan, for Wenatchee in June 1911 for a tour of the city and a baseball game. Omak Fruit Growers was the name of the Omak town team; most of those on board were from Omak. 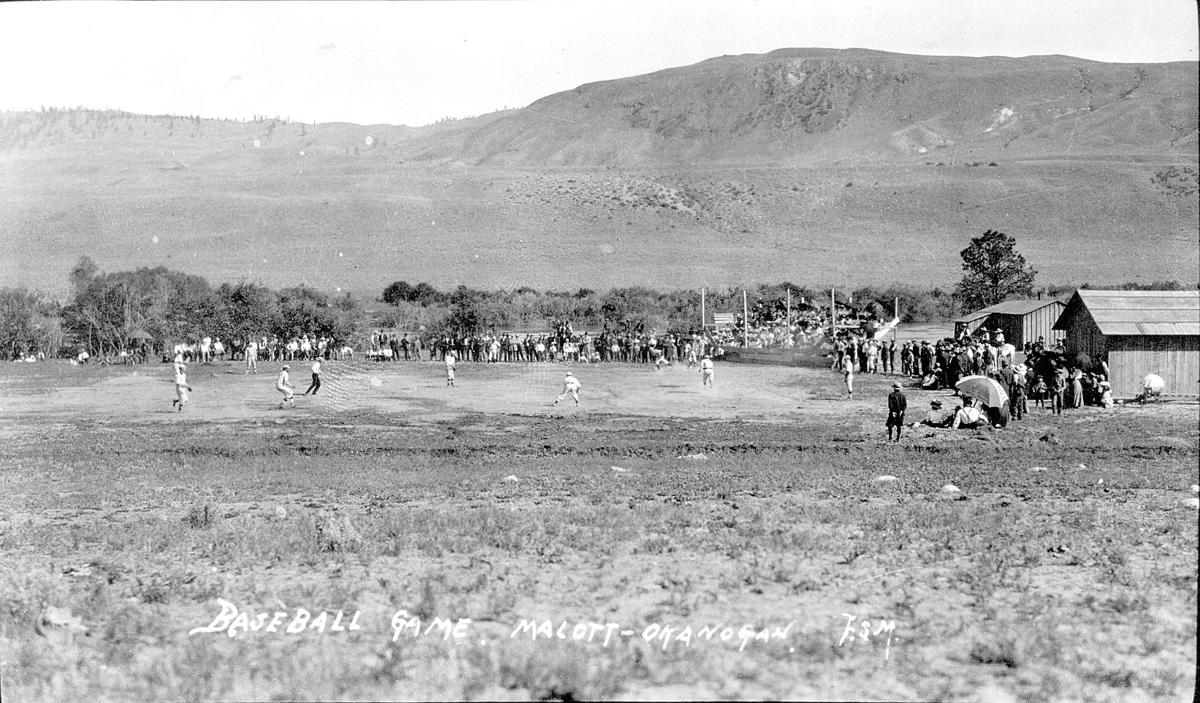 The Okanogan-Malott baseball game, played in Okanogan before a good-sized crowd.

A 1913 baseball game pits Okanogan against Conconully, with Conconully Dam and reservoir in the background.

A steamboat leaves, probably from a stop in Okanogan, for Wenatchee in June 1911 for a tour of the city and a baseball game. Omak Fruit Growers was the name of the Omak town team; most of those on board were from Omak.

The Okanogan-Malott baseball game, played in Okanogan before a good-sized crowd.

OMAK - If you were sitting in Omak a 100 years ago, you knew that baseball was the king of sports, that people wintered in town because they were unable to get to their snowbound homesteads and apples grew abundantly, 50 to a limb.

In 1910 in Omak, horseback was the favored mode of transportation. The first car would not arrive until 1911. First a Stanley Steamer for George W. Lee puffed into town. A Reo driven in for Claude George followed soon after.

For longer trips, steamboats were preferred, but they ran only when Okanogan River water levels were high.

Teams used all those modes, plus canoes, to reach away games.

A typical high school football game in 1910, which was a year after the first-ever game in the county, would find players using straps of leather for helmets that provided dubious protection to a player’s noggin. They would wear bulky jerseys, more to stay warm than protect from vicious hits.

Baseball mitts were rudimentary, formed from cowhide, and bats were made of wood, not aluminum or composites.

Scoring and rules differed back then, too, though some sports, such as baseball, keep the same scoring method.

Omak High School played teams from dominant Conconully to Riverside, St. Mary’s Mission, Okanogan and Brewster, which The Chronicle referred to as the “down river team.”

Those from Omak often were called Omakites, while those from Okanogan were Okanoganites.

A hundred years ago, the high school basketball team took on a town team and tied at 21-21.

Afterward, all players met at coach and principal G.R. Wilkinson’s bungalow for an oyster supper.

“The Victor machine, which had several hours of exercise, added greatly to the entertainment,” The Chronicle reported.

Those players listened over and over into the early morning to “Let Me Down Easily” on the windup player.

Bonding of players has long been a product of athletic contests, “realizing fully that there is a great deal more to athletics than capturing the winning score,” The Chronicle wrote about the century-old supper.

While baseball appears to be the first sport played in Omak, track, basketball, football and tennis soon followed.

There was a track meet in Conconully, the third annual being in 1911, when Omak did not participate.

A dance wound up festivities.

A quick scan of games a century ago found a pitcher called a sidewheeler and a football player left the game after he “shot his bolt.” Home plate was called home pan.

The Chronicle described a close baseball play as being “as close as the bark on a tree.”

In 1911, following a steamboat trip to Wenatchee to play baseball, player J.N. “Mick” Staten married Miss Hazel Wilson from Brook, Ind., prior to the game.

Former Chronicle publisher Bruce A. Wilson, in his book “Late Frontier, A History of Okanogan County, Washington,” wrote that the county’s pioneers gathered on Sunday afternoons in pastures and vacant lots to watch town baseball teams.

Some were local, while others brought in ringers.

The most famous of those early games was a 15-inning tilt between Conconully and Okanogan for the county championship in 1914 - the same year the two cities locked horns in the battle for which one would be the county seat.

The game was played in Okanogan on a ball field along Fourth Avenue a few blocks north of the present courthouse. A special Great Northern train brought in fans from Oroville and Tonasket; the total crowd was estimated at 1,000, Wilson wrote.

“The Conconully team appeared with five new men in their lineup - Walter Pein of Tonasket, Davis of Penticton (B.C.), W. McCrory of Chesaw, Holly of the Douglas-Okanogan League, and Kinneman of Oroville,” according to the Okanogan Independent.

Wilson noted that the Independent failed to realize Kinneman, Conconully’s pitcher, was serving 60-90 days in the county jail. He was released for practices and games by Sheriff Harry Stark, also the Conconully team’s manager.

Conconully also drew on the talents of Roy Smith, University of Michigan, and Walter deLacy, Montana State College, who had summer jobs in Conconully.

Meanwhile, Okanogan bolstered its lineup with members of a survey crew running lines for the Okanogan Reclamation Project, according to Wilson.

The teams were evenly matched; the contest was tense and exciting, with the score tied 1-1 at the top of the 15th inning.

At the bottom of the inning, Okanogan’s Knapp drove in Jergens (no first name listed), but the tying run was left on second.

The sheriff released his winning pitcher, Kinneman, from jail with the understanding that he would leave the county despite having several weeks left of his sentence, Wilson wrote.

A decade later, Tonasket brought in Ed Brandt as a ringer. The 19-year-old southpaw from Tonasket later went on to pitch for 11 years in the National League.

With Brandt, Tonasket beat Oroville 5-0, Omak 4-2 and Okanogan 3-2. He later tossed a two-hitter, but his team lost to Oroville, 2-1. A loss to Omak was followed by a win over Okanogan. Then Brandt left town, Wilson wrote.

Brandt became a professional with Seattle’s team in the Pacific Coast League and then spent eight years with the Boston Braves. He ended his career with Brooklyn and Pittsburgh, tallying a major league record of 121-146.