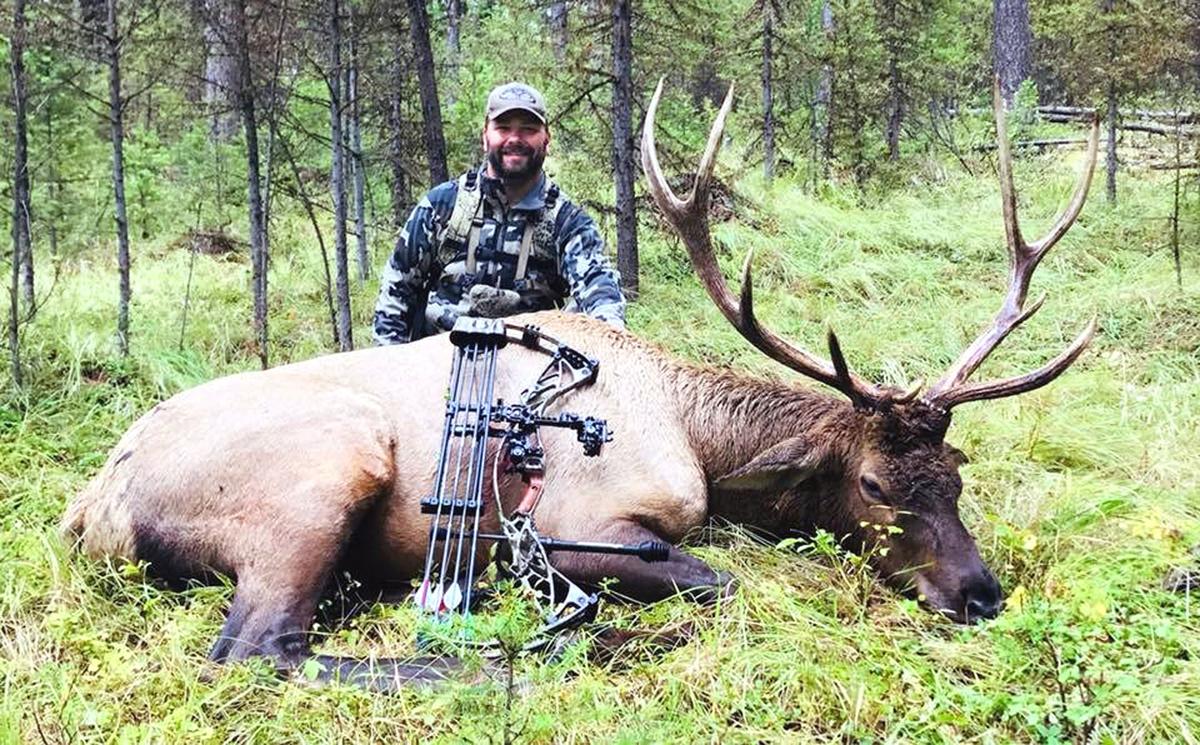 Jerrod Gibbons poses with an elk that filled his archery tab last week. “One of the coolest things I have experienced calling in; having Kevin McCullough call and Mindy Webster watch,” he said. “This bull came in on a string and presented me a 30-yard shot. Meat in the freezer for the next year is a great feeling.” 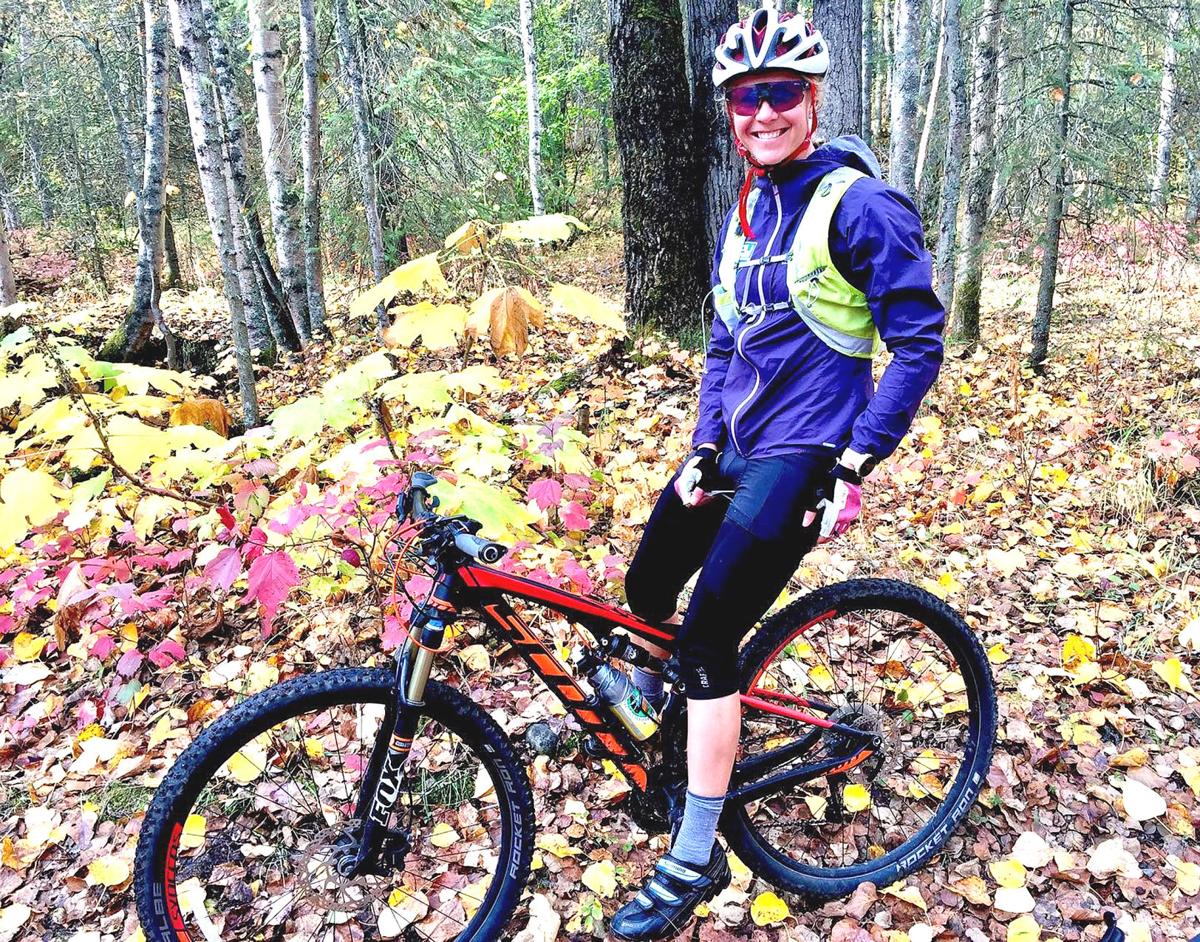 Jerrod Gibbons poses with an elk that filled his archery tab last week. “One of the coolest things I have experienced calling in; having Kevin McCullough call and Mindy Webster watch,” he said. “This bull came in on a string and presented me a 30-yard shot. Meat in the freezer for the next year is a great feeling.”

New members are sought for the Omak Booster Club, which also plans a fundraiser dinner and auction next month.

On the auction block will be a variety of items, including those signed by Drew Bledsoe, former WSU and NFL quarterback.

He currently is owner/founder of Doubleback Winery in Walla Walla.

Admission will be charged to the dinner.

Membership information is available at www.omakpioneers.omaksd.org/athletics/booster_club.

Omak High School will have a Red and Black barbecue 3-5 p.m. Sept. 20 by the bus stop near the blacktop, the school says.

It is open to all high school students and staff.

Those attending are encouraged to wear school colors – red and black.

There is a three-point minimum.

Early muzzle loader general deer season for white tail and mule deer start Sept. 28 and run to Oct. 6. Be sure to check GMUs and restrictions.

George Dunckel scored a whopping 9,310 to lead the way at Tuesday pinochle, Sept. 10, at the Eagles in Okanogan.

Flag football drew 77 teams this year of those in first through four grade, reports Jake Townsend, who said the league is in its fourth season.

No Discover Pass will be required for day-use visits by vehicles.

The next free days are Monday, Nov. 11, for Veterans Day and Friday, Nov. 29, for autumn free day.

The impact of a new agreement between native tribes and the Canadian government to restore salmon to the upper reaches of the Columbia River will depend on how the fish are managed, says the director of the state Department of Agriculture.

They hope to restore fish stocks to support indigenous food, and social and ceremonial needs, according to a joint announcement.

The effort will complement current negotiations between Canada and the U.S. on modernizing the Columbia River Treaty. Whether and how much the agreements will impact irrigation water availability in the region remains up in the air.

Canada’s federal government is working closely with British Columbia and the tribes to shape its approach to the negotiations, according to the announcement.

“We agreed to discuss fish reintroduction with Canada,” a representative for the U.S. State Department Bureau of Western Hemisphere Affairs said in an email to the Capital Press. “We understand the issue of fish reintroduction is important to many Columbia Basin tribes and residents.”

“Maintaining and improving the health of existing stocks of anadromous fish in the Columbia Basin through sound management is an essential prerequisite to any meaningful consideration of reintroduction into blocked areas in the future,” the representative added.

Construction of Grand Coulee Dam in the 1930s and 1940s blocked salmon from reaching the Upper Columbia River in Canada, leading to the extirpation of salmon stocks in those areas.

Bringing the salmon back would require an upstream adult salmon migration component and a downstream juvenile salmon component, Sandison told the Capital Press.

The specific methods used for each would potentially have effects on the water supply and flood-risk management, he said. Lake Roosevelt plays a large role in managing downstream flood risk. During years of high runoff, spring lake levels are significantly lowered to hold a large influx of water and prevent downstream flooding.

“In terms of downstream migration, the question is can you maintain a viable outlet for juveniles as the lake is fluctuated to that degree?” he said.

Sandison expects the impacts on agriculture to become clear as the methods are proposed.

“I don’t think there’s enough information now to make any kind of definitive judgment,” he said.

Ecosystem function was included in both the U.S. and Canadian regional recommendations for the treaty, primarily focusing on river flow more than fish passage, Sandison said.

The next round of negotiations is Sept. 10-11 in Cranbrook, B.C.

Restoring anadromous fish such as salmon was discussed extensively in 2012-2013 during formulation of the regional recommendations and sovereign review, Sandison said.

“It’s been talked about a lot,” he said.

The department is following the discussions, Sandison said.

“We need more specifics to be able to determine what the impacts might be to agriculture,” he said.

Since September 2018, a total of 275 mountain goats have been translocated. An additional two-week capture and translocation period is planned for summer 2020.

The effort is a partnership among the National Park Service, the state Department of Fish and Wildlife and the U.S. Forest Service to re-establish and assist in connecting depleted populations of mountain goats in the Washington Cascades while also removing non-native goats from the Olympic Mountains.

Though some mountain goat populations in the North Cascades have recovered since the 1990s, the species is still absent or rare in many areas of its historic range.

Mountain goats were introduced to the Olympics in the 1920s.

Both will be located in DNR’s Ellensburg office and will serve the communications and outreach needs of the agency’s Southeast and Northeast regions, which encompass all counties east of the Cascades.

“I’m thrilled that the work we are doing at DNR has led such talented professionals to join our team,” said Commissioner of Public Lands Hilary Franz. “We are making great progress in eastern Washington fighting wildfire, creating healthy forests, and supporting local schools and economies. The addition of Alison and Ryan will help us better tell these stories and increase our partnership with local communities.”

The state Department of Fish and Wildlife has scheduled three online, interactive webinars this September and October to discuss planning and management for wolf populations once they are no longer listed as endangered in the state.

“We know that wolves are a huge topic of interest to the public and we want to hear everyone’s input, in a respectful and productive way, on how to manage them,” said department Director Kelly Susewind. “These digital open houses will allow anyone who is interested to learn about Washington’s wolves, ask questions, and find out how to provide feedback on the topic.”

While public comment won’t be accepted during the webinars, the goal is to both educate about wolves and share ways that people can voice their thoughts to the department concerning wolf management. Comments will help to inform the State Environmental Policy Act (SEPA) process that will be used to develop a post-recovery plan for wolves.

There was one earlier webinar Tuesday, Sept. 17.

Everyone is welcome to take part in these webinars. They can be accessed by going to the department’s website, wdfw.wa.gov, and clicking on a link there.

There are other ways to participate in the department’s scoping process. The department is accepting comments via an online survey, online commenting and in writing by mailing to Lisa Wood, WDFW – Wolf Post-Recovery Plan Scoping, P.O. Box 43200, Olympia, WA 98504-3200.

Al Camp is the sports editor at The Chronicle. Email him at sports@omakchronicle.com.