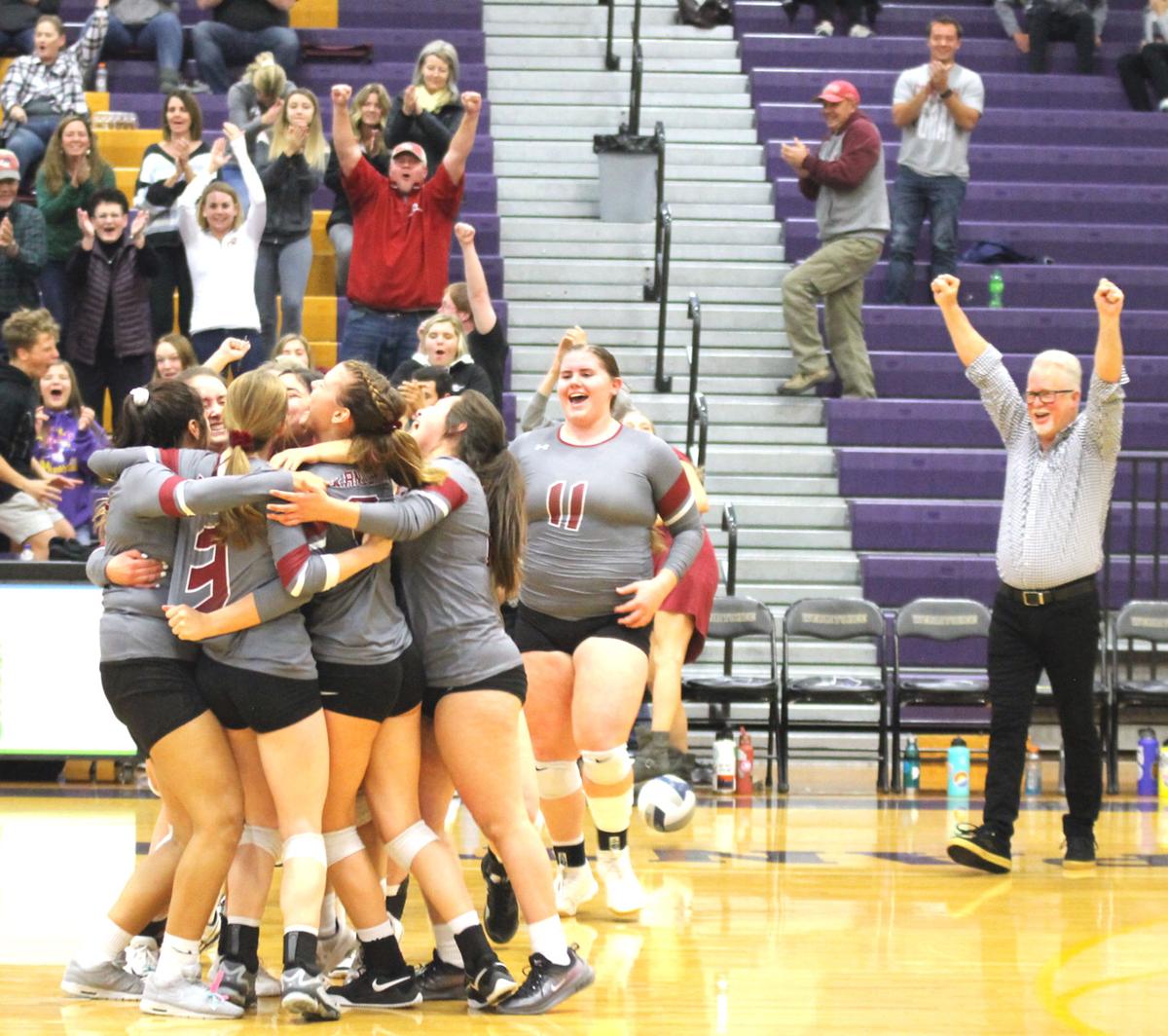 The Okanogan volleyball team, fans and coach Ray Cross (right) celebrate a tough 3-2 win over Omak in the District 6 tournament. State volleyball opened Nov. 14 with 1B and 2B matches at the Yakima SunDome. State 1A started Friday and was to wind up today, Nov. 16. 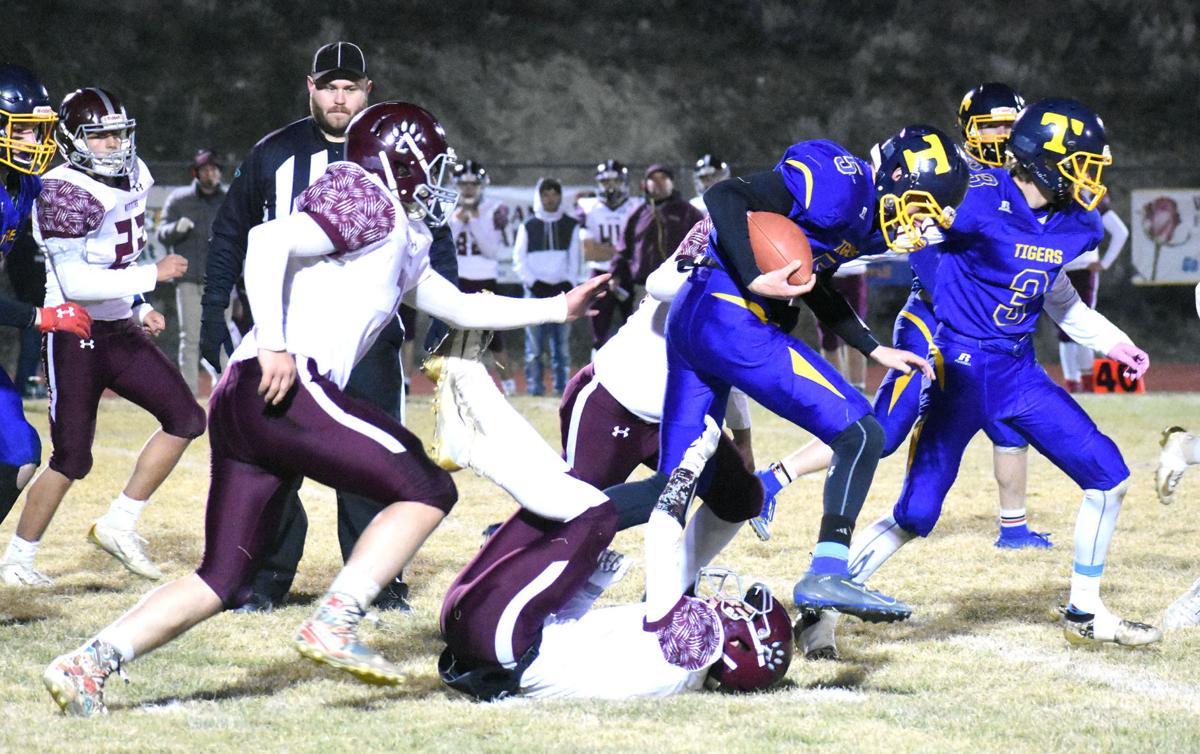 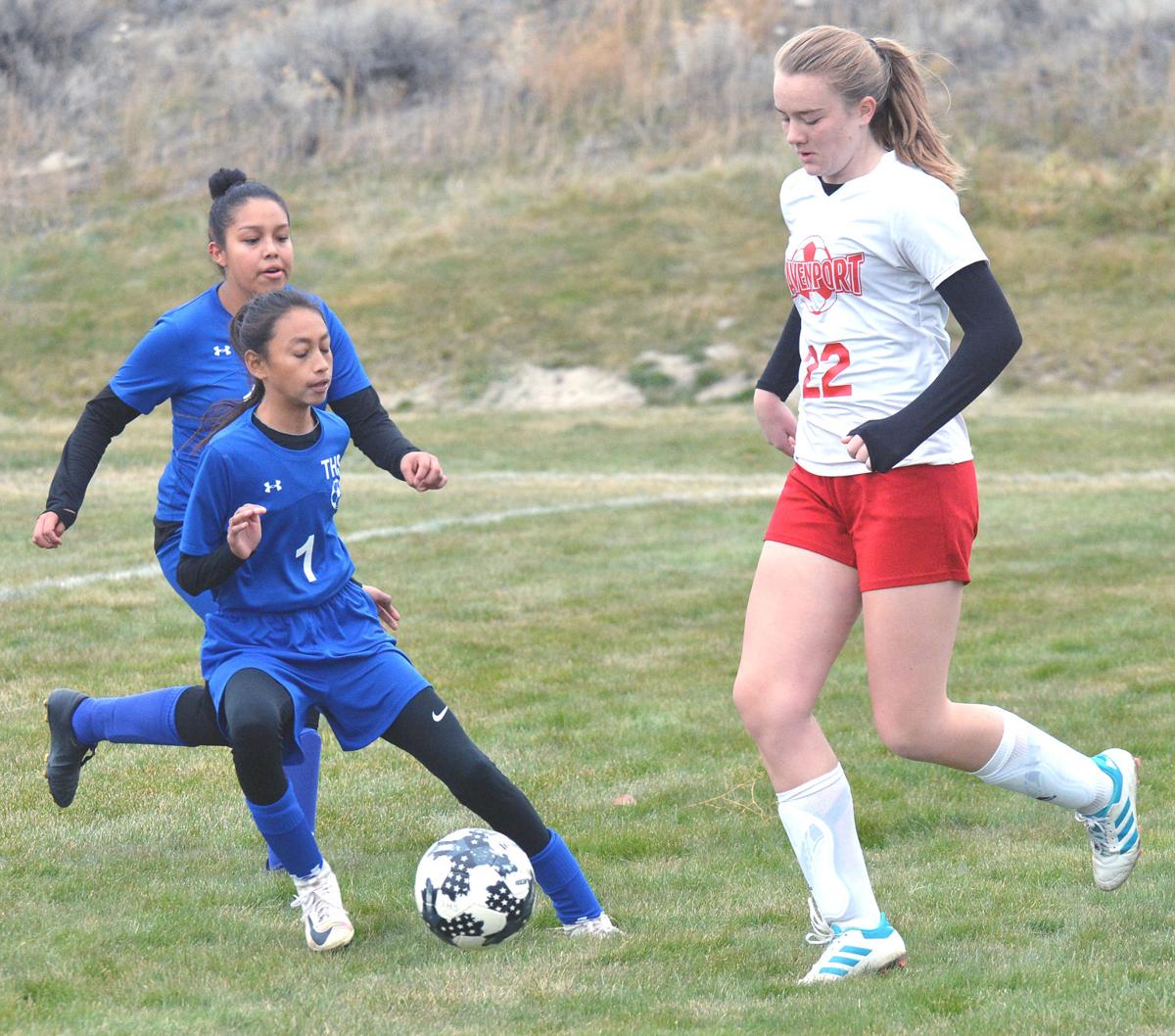 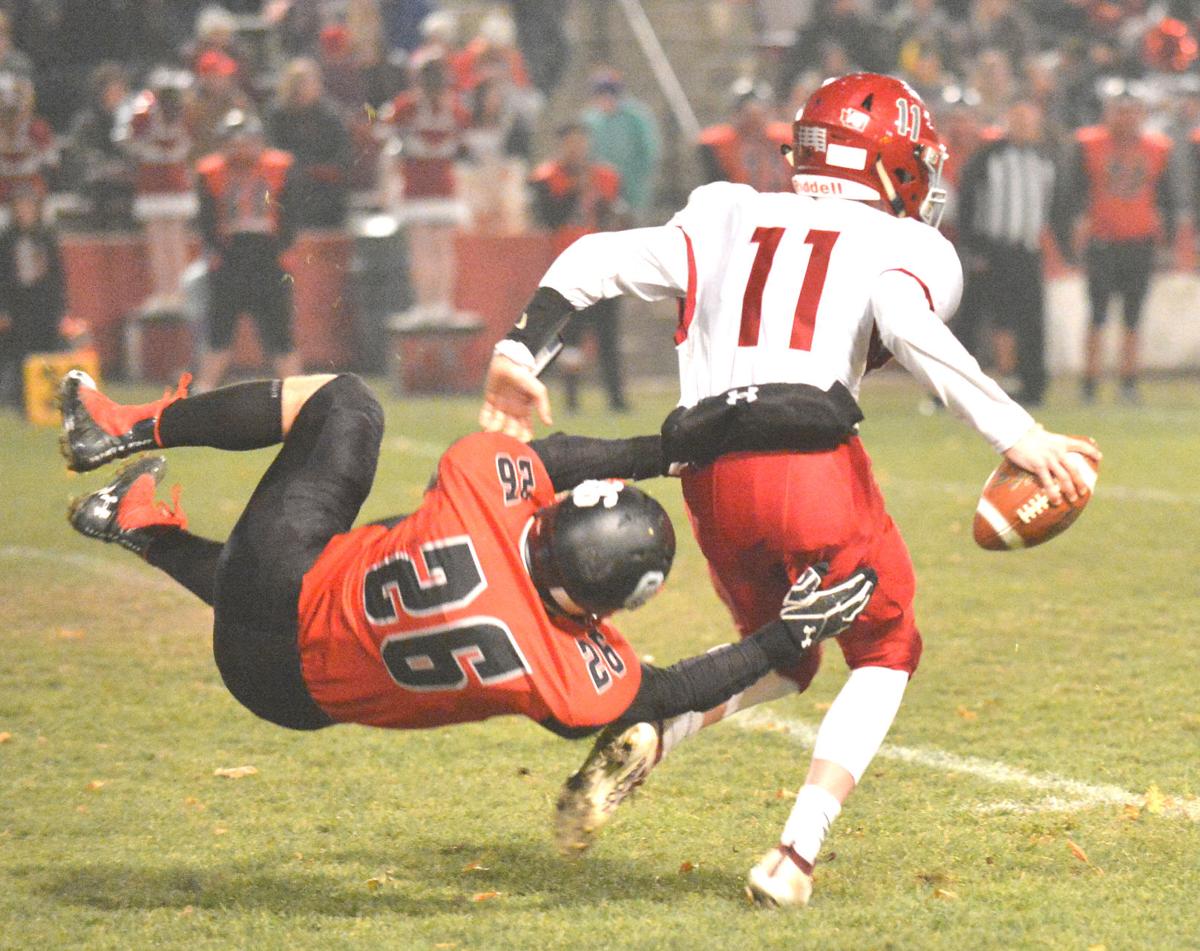 Joseph Bucsko of Omak hangs on for a tackle of Okanogan quarterback of Brad Ingram. 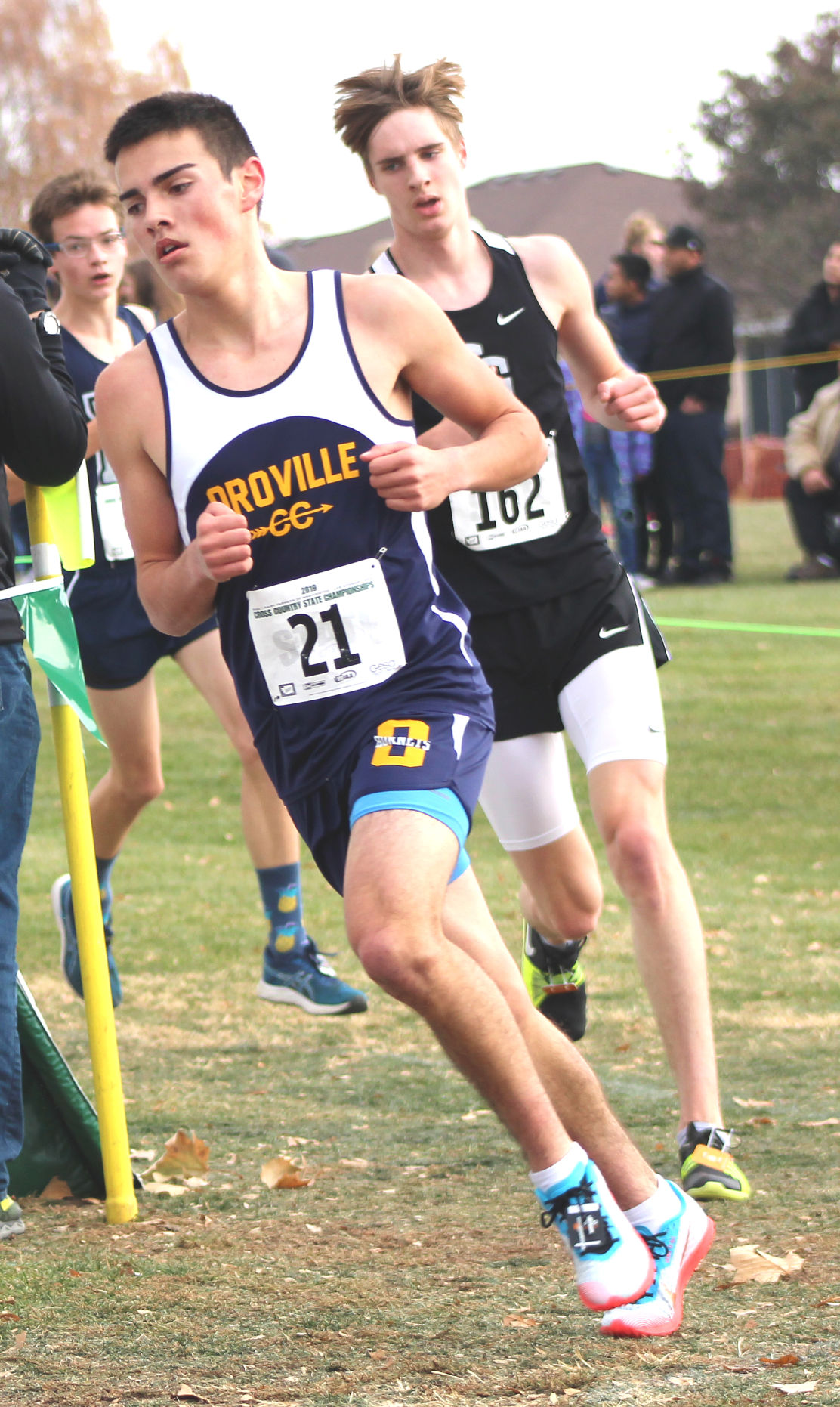 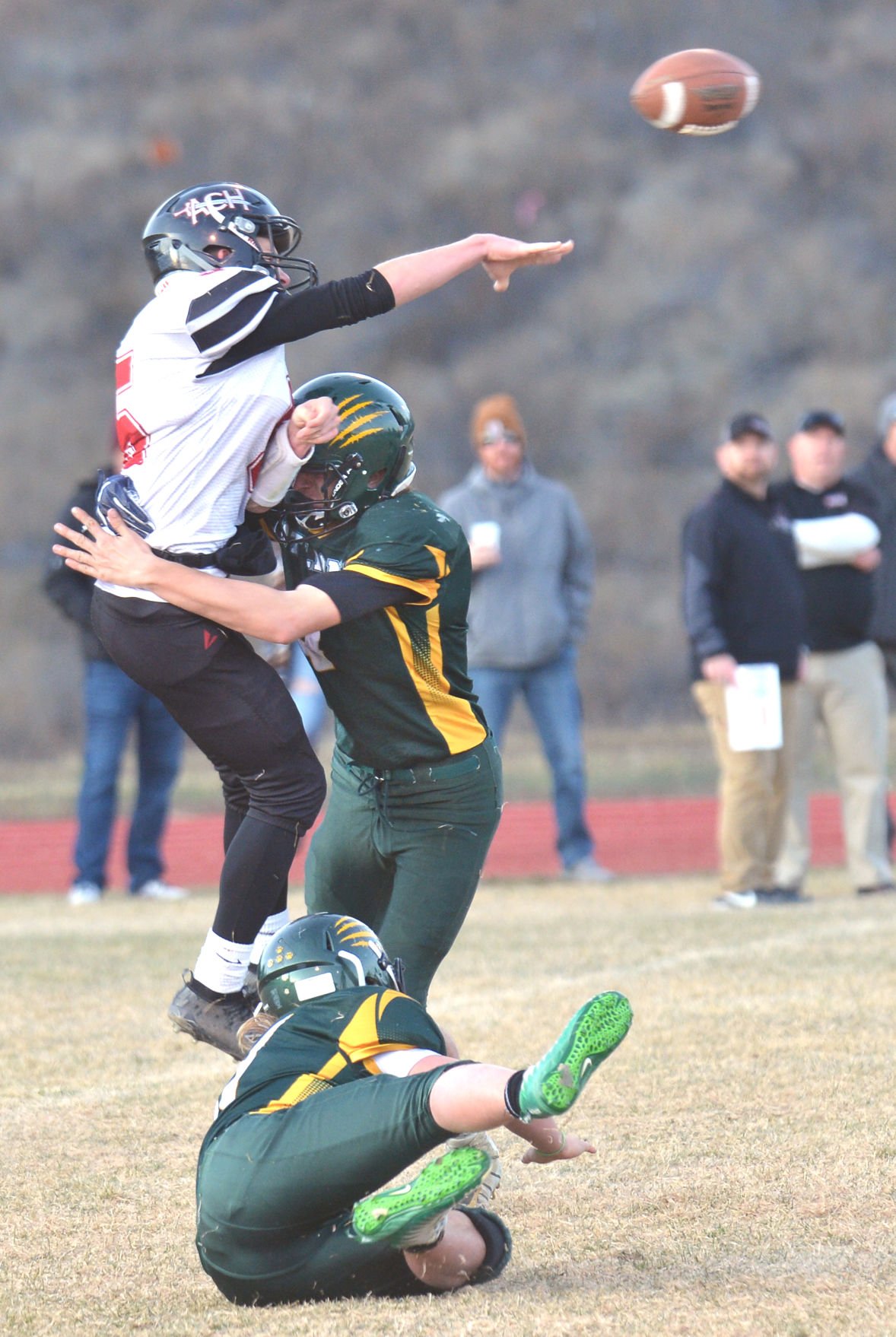 The Okanogan volleyball team, fans and coach Ray Cross (right) celebrate a tough 3-2 win over Omak in the District 6 tournament. State volleyball opened Nov. 14 with 1B and 2B matches at the Yakima SunDome. State 1A started Friday and was to wind up today, Nov. 16.

Joseph Bucsko of Omak hangs on for a tackle of Okanogan quarterback of Brad Ingram.

Check out more photos from the last couple weeks

Our region of the state, north central Washington, continues to be well represented in state tournaments this fall.

Liberty Bell took both of its teams, girls and boys, to the state 1B/2B race in Pasco, with the girls finishing second and the boys taking eighth.

This was the 10the straight year the girls’ team went to state, where they had won the last three championships.

The Brewster boys were fifth.

Every team in our region sent someone to state, which is quite an accomplishment.

Pateros did not have a cross country team.

Omak and Okanogan competed in 1A state last weekend.

Volleyball is finishing at the end of this week at the SunDome in Yakima.

State volleyball, which includes Pateros and Almira/Coulee-Hartline in 1B, Brewster and Lake Roosevelt in 2B, and Okanogan in 1A, is being played this week at the Yakima SunDome.

The Nannies, which went undefeated in league play (12-0) have placed three times (fifth, seventh and eighth).

The Lady Warriors reached the state semifinals with a 25-14, 25-15 and 25-13 win Thursday evening over Puget Sound Adventist.

That set up a semifinal match with Pomeroy after The Chronicle’s news deadline Friday morning.

Before this year, ACH had been to state nine times since 1999 (last being 2012, when the team finished fourth), placing six times including a championship in 2010. The Lady Warriors also earned placements of second, two fourths, a fifth and a sixth.

The Bears were to play Liberty of Spangle in a loser-out match Friday morning.

Before this year, Brewster had been to state eight times since 1989, finishing a best of fifth last year. The Bears also have placed sixth and seventh.

This is the first Lake Roosevelt team to reach state since 1991, or 28 years ago.

The Raiders had been to state four times since 1978, never reaching a trophy match.

Okanogan was to play the last opening round of 1A on Friday evening against No. 1 seed King’s.

The Bulldogs had been to state 17 times before this week, the last in 2014.

Liberty Bell girls’ soccer is the lone team still alive in state from our region.

The winner advances to the Final Four on Nov. 22-23 at Sunset Chev Stadium in Sumner.

Liberty Bell has appeared in state 12 times since 2003, including every year since 2012.

The Mountain Lions in the Final Four have finished second once and fourth four times.

The first round of state in 1A and 2B (which have 16 team brackets) opened this week.

Prior to this season, the Pioneers appeared in 12 state tournaments, winning the title in 2000 and 1979.

The Tigers have lost twice in the quarterfinals.

Lake Roosevelt has been in the state tournament four times prior to this season, including the last three years.

The Raiders’ best finish was falling in the 2001 quarterfinals (60-8 to Zillah).

In 1B, Bridgeport is at Almira/Coulee-Hartline at 2 p.m. in a state qualifier. The winner advances to the Elite Eight state tournament that starts next week.

Bridgeport last appeared in state in 1980. The Mustangs also played in the 1977 state tournament.

State football finals are slated for Dec. 7 at various stadiums in western Washington.

Other notes on 1B include: